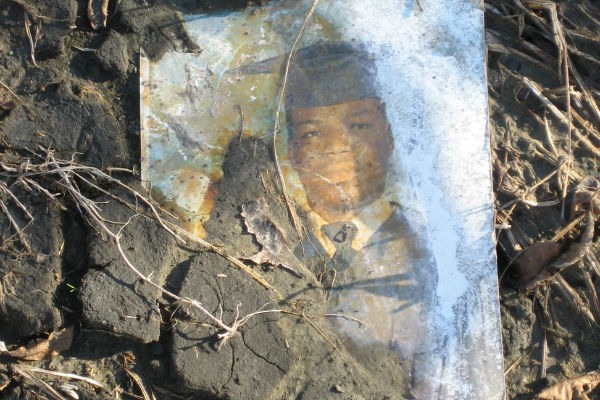 Katrina’s flood silt soaks the portrait in the image below, but divide the picture in quadrants to absorb its details before you read on.

Do you first perceive the handsome graduate or nature’s chaos? Does he foresee a bright future, or rue that government left New Orleans’ Lower Ninth Ward, 98.3 percent Black fifteen years ago, 93.7 percent now, poised for a fall and forsaken? Could faded green leaves point to a once verdant setting’s potential?

Dignitaries and media landing at the $1 billion Louis Armstrong International Airport on the storm and flood’s August 29th anniversary to laud the city’s recovery should cross the Industrial Canal that isolates the Lower Ninth Ward from downtown.

Striking progress and need coexist in the place hardest hit and last helped; most visitors want to pitch in. But those whose reactions make network news sidestep racism.

“It’s striking how quickly parts of the city were renewed, refurbished, reimagined almost, while other places look stuck in a time capsule, The Atlantic’s Clint Smith, a New Orleans teen in 2005, observed this week in a webinar.

Five visits convince me you find what you seek when you’re there.

Clearing an abandoned block for builders, chopping hedges to discourage intruders near home for an elderly lady alone, repainting scarred walls of a house worth saving, and hanging drywall in its living room with my son portrays sweat equity from 50,000 volunteers one resolute woman has drawn since the disaster from US houses of worship and higher learning.

Warrenetta Banks, armed with desk, phone, and map in a quaint church’s cramped annex after two years in a Texas FEMA trailer, launched a movement with stunning success. The Greater Little Zion Baptist Church, built-in 1916, anchored folks after Katrina. They replaced its ruined electrical systems, floors, and pews, teaching each other to repair their own properties. Warrenetta partnered with the Center for Sustainable Engagement and the Holy Cross Neighborhood Association, then founded Lower Nine Resilient, ensuring further growth.

“Can you believe it’s been nearly fifteen years since the levees broke and flooded 80 percent of our beloved city of New Orleans? What amazes me is we still have volunteers coming,” she says, with special praise for annual aid Emory and Marquette Universities.

An abandoned house I inspected in 2010 had an eight-foot watermark in its kitchen, its wall calendar still on August 2005. Gale force winds smashed furniture, forcing coffee table, couch, and console across a living room and up a wall. I stumbled outside in shock.

Though FEMA marooned them in the Superdome without water, food, or medical aid, or put them, like Warrenetta, on Houston-bound buses, landing with no visible signs of support, Lower Ninth survivors endured and returned.

“I don’t desire to live in any other place,” Warrenetta explains. It’s hard for people not from here to understand what it’s like to lose every single thing in one day but how it’s still home. New Orleans is so small that most people are related in some way, so the best part of their humanity comes out. If you’re distressed, you’re never truly alone.”

The Guerrilla Garden, started by trench-diggers in a blighted lot’s scrub grass, brightens lives with fresh produce, potlucks, and workshops for a section with few services since the Industrial Canal divides it from downtown. Landscaping, fresh paint, and new construction are concrete progress signs.

The vigorous rebuilding sows hope for the future but a fuller tale is truthful.

“He who refuses a suppliant the aid which he has the power to give is accountable to justice,” Joseph in the Bible declares but his words fall on deaf ears.

Warrenetta and others – Jenga Mwendo, the Guerrilla Garden’s leader; Burnell Cotlon, the military veteran who, with his life savings, rebuilt a gutted structure as the first local grocery store and laundromat – march on. Pastel hues brighten houses.

“Although the architecture of the neighborhood reflects post-World War II styles including bungalows and ranches, shotgun and expanded shotgun homes from the turn of the century, and revival and adaptive styles from development in the 1930s and 40s also grace the neighborhood. Other homes of Spanish and Tudor style clad with stucco and Cape styles can also be found,” the City Council’s Lower Ninth Ward Redevelopment Plan asserts.

It adds that “State and Federal subsidies will be required to help residents rebuild and to attract private investment in the area.”

The late Ward “Mack” McClendon before the storm sold luxury cars for his living, then launched the Lower Ninth Ward Village, a community center for library, cultural and job training programs. “Just one-third have returned,” Mack acknowledged in 2014, “but I’d put that one-third against the world. They had to come out of the water fighting. There would be more if we had more resources.”

US Census data supports him. The 2000 population of 14,008 was 4,378 in 2018, official neglect abetting Katrina’s effects. The Lower Ninth’s sparse services from shortfalls in outside aid contrast with the revived business district, football stadium, basketball arena, French Quarter and that billion dollar airport a bridge away.

With average household income down from $39,561 to $33,531, 37 percent of its people in poverty and 8.3 percent with bachelor’s degrees, the Lower Ninth Ward despite a strong work ethic needs outside investors.

“The Superdome – which sheltered thousands during the storm – has been renovated and now carries the Mercedes-Benz name. A new veterans hospital and $1.1 billion University Medical Center are scheduled to open,” cheered a 2015 Financial Post piece. “Venture capital funds and philanthropies are lining up with grants for city projects. The recovery has been uneven, however, with areas like the flood-ravaged Lower Ninth Ward lagging behind.”

With the need now as clear as a gut punch one wonders what would move municipal leaders to act. Reverend Steve Gonzalez, Warrenetta’s “volunteer angel,” friend and ally,  summarizing at length outside the church office, awakened me to the value in stories. The Lower Ninth Ward, he implied, must feel heard by the captains of industry.

As dignitaries and media assemble soon in New Orleans, will they put ears to the ground, listening?

The young man in the image is waiting.