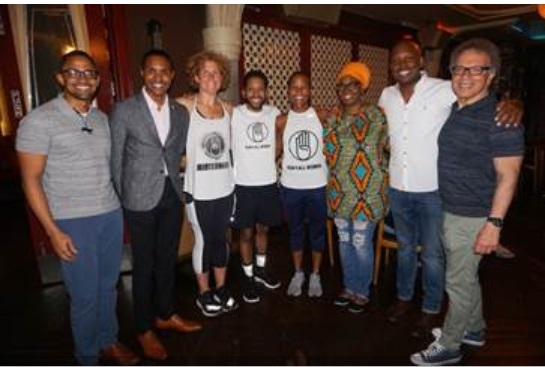 Members of #Run4AllWomen, a grassroots movement which uses running as a vehicle for social change, will run 2,018 miles to help Democrats take back Congress in this year’s midterm elections.

Led by #Run4AllWomen founder, ultra-marathoner, and social activist Alison Désír, Midterm Run will galvanize runners (and walkers) from across the country to raise money and awareness for 11 candidates for the U.S. House of Representatives – and six for the U.S. Senate – committed to the group’s core values regarding women’s health and women’s rights, common-sense gun control, LGBTQ+ issues, immigration, criminal justice reform, and affordable health care.

Désír made headlines in early 2017 after she led a 250-mile run from Harlem to D.C. and raised more than $100,000 for Planned Parenthood. What began as an effort of four women running for women’s health and women’s issues, arriving the morning of the Women’s March, quickly grew into an effort that garnered global support and energized thousands of runners, walkers, and cheerleaders to join the effort along the route or host solidarity runs around the country.

“November 6, 2018 will come and go, and I refuse to look back and wonder if there was more I could do to advance women’s rights and other progressive values, and create a government that works for all. But I can’t do this alone. This effort is going to require the support of others, which is why I’m calling on people everywhere to run the miles, run to register, and run to vote,” said Désír.

“It always takes a committed few people who really got the courage, the insight, and the passion to set stuff off! The Midterm Run is not about the Republicans or about the Democrats. This is about us pushing progress in this country – today!,” said LaTosha Brown, the lead ground-organizer of the Midterm Run.

The Midterm Run will cover the distance equivalent to 75 New York City marathons and host voter registration drives and candidate events across the route from Ohio to Illinois, Tennessee to Texas, and Arizona to Nevada. In each city, residents will be encouraged to run and walk along the route, learn more about upcoming local elections, and support other runners and walkers in their efforts. The official route, along with planned events, can be found here.

The money raised will go directly to candidates, political action groups, and progressive grassroots organizations such as Emily’s List, The Victory Fund, The Latino Victory Fund, Black Voters Matter, and other groups partnering with the Midterm Run working to activate progressive voters in competitive races. Separately, those looking to support a nonpartisan civic engagement and capacity building for community-based organization can support the 501(c)3 organization, BVM Capacity Building Institute.

Several national groups have pledged to match every dollar donated to Midterm Run in support of the candidates the group is endorsing.

To donate or get involved, please visit: www.midtermrun.com