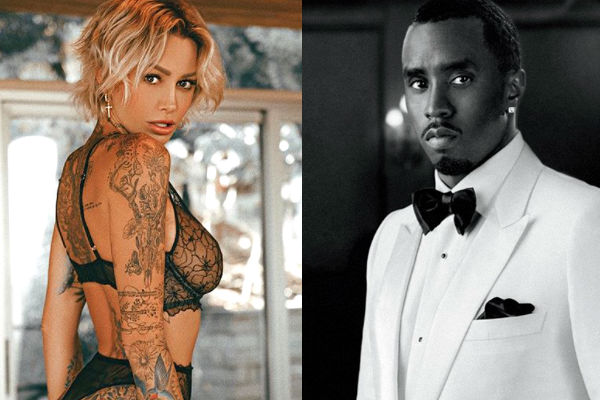 Diddy appears to be coupled up with model Tina Louise. Harlem’s Diddy, 50, was all smiles and coupled in California as paparazzi snapped photos of the mogul with a model named Tina Louise.

The pair were seen in Bossip smooching it up on a beach blanket in Malibu. Paparazzi then snapped the couple snuggling under the blanket for a little bit of privacy.

This is the first time anyone has seen Diddy and Tina together, so there’s no telling how long they’ve been seeing each other but this is new for Diddy, who has been single things ended with Cassie in 2018.

The photos look like Diddy and his Australian model Tina are getting to know each other here and seem to be comfortable with each other.

Tina Louise is not just a model, she co-owns a plant-based restaurant in the Melrose area of Los Angeles called Sugar Taco. So far we don’t know much else about her aside from clues from her Instagram account. She’s 39 and is apparently half Aussie and half German. She’s also an activist and hails from Bondi Beach, Sydney Australia.

According to the Daily Mail, Tina and Diddy’s rumored relationship comes just one month after the Australian bombshell broke up with Brian Austin Green, who was an actor on 90210. The couple first began dating back in June, following his divorce from Megan Fox whom he was married to for 10 years.

Louise says she was “discovered” at age 21 by a photographer on the beach. Tina is also a model on Patreon for a price and “Only Fans”, offering exclusive content to her followers for free (for now) if anyone is interested in a subscription. Louise’s private content is marked for 18+ and up viewers.

Hey Harlem, what do you think of Diddy and his new lady, Tina?