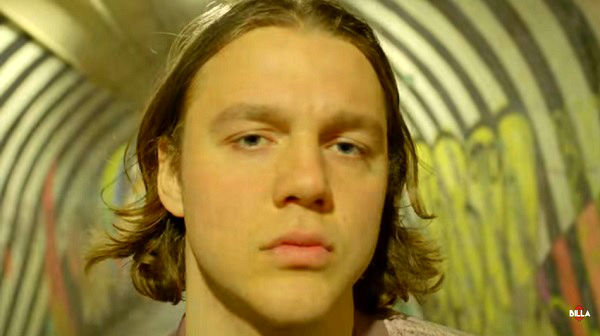 It didn’t take the paparazzi long last week to find the Fifth Avenue home of Gregory and Marcia Abbott, two of the parents named in the largest college admissions scandal in U.S. history. They gathered there, presumably hoping for a glimpse of or word with Gregory—the C.E.O. of food and beverage packaging company International Dispensing Corp.—or his wife, both of whom are accused of paying $125,000 to boost the standardized-testing scores of their daughter. (The Abbotts’ lawyers have not responded to a request for comment.) Instead, they found another family member: 21-year-old rapper Malcolm Abbott, the middle child of Gregory and Marcia, who goes by the name “Billa” and wanted to plug his new E.P.

“They were looking for someone to come out in a suit and tie and say something ridiculous,” Malcolm told Vanity Fair on Sunday. Malcolm acknowledged that part of the reason why he addressed the reporters was because he wanted to promote his music career, for which he receives no financial backing from his family. “I went and took matters into my own hands, like the Ides of March, you know?”

So Malcolm slicked his hair back into a ponytail, lit up a fat blunt—the same one, he told me, he was smoking on the other end of our phone call—and faced the cameras with a statement. “Check out my CD, Cheese & Crackers,” he told the crowd.

Malcolm is not the first musician in the family. Malcolm’s maternal grandmother, Miriam Gay Meighan, who married a New York state senator, was an accomplished pianist who could play anything by ear. Malcolm’s sister was a soloist at the Metropolitan Opera, confirmed a source close to the family, who added, “and no, she did not buy her voice box.” The source continued, “Malcolm’s musical talent is definitely genetic.”

The college admissions scandal has put Malcolm—the family’s “rapper and weed-smoking son,” who was “kicked out of the house” during his teens—in a strange position. He holds no ill will toward his family—“Honestly, I blame myself for [being kicked out],” Malcolm said. “I would’ve kicked my kid out too.”—and inherently supports his relatives. “I would take a bullet for either one of [my parents]. I love my family, and I’m sympathetic to everything they’re going through. I’m trying to be the best son I can be.”

Having lived in Harlem and developed meaningful relationships with people from different walks of life, and having had his eyes opened to social injustices through rap music, Malcolm’s come to support “free education” and the belief that “kids with the same amount of intelligence deserve the same education,” regardless of background. “I’m someone who hates classism,” he stated.

That being said, “You also have to back what’s right. . . . I hope those kids who got those spots taken from them—and were maybe skipped over—I hope they get their just. You know what it is.” Having lived in Harlem and developed meaningful relationships with people from different walks of life, and having had his eyes opened to social injustices through rap music, Malcolm’s come to support “free education” and the belief that “kids with the same amount of intelligence deserve the same education,” regardless of background. “I’m someone who hates classism,” he stated.