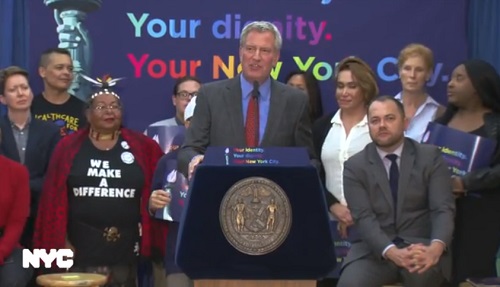 Mayor Bill de Blasio today signed a historic piece of legislation into law, creating for the first time a third gender category on New York City birth certificates from Harlem to Hollis. The new law also makes it easier for transgender and gender non-binary people born in the City to amend their birth certificates to more accurately reflect who they are by removing medical and administrative barriers. The law will go into effect on January 1, 2019.

Intro 954-A was recently passed by the New York City Council under the leadership of Speaker Corey Johnson and in close partnership with the Department of Health and Mental Hygiene. This law continues the City’s work in championing the rights of the LGBTQ community.

“New Yorkers should be free to tell their government who they are, not the other way around,” said Mayor de Blasio. “This new legislation will empower all New Yorkers – especially our transgender and gender non-binary residents – to have birth certificates that better reflect their identity, and it furthers the City’s commitment to defending the rights of our LGBTQ community.”

“For the first time, all New Yorkers will be able to get a birth certificate that reflects and affirms their lived reality,” said First Lady Chirlane McCray. “We will not stop there— we strive to extend that dignity to every aspect of life. We will stand strong against any attempt to deny members of the LGBTQ community the respect or safety they deserve as fellow human beings.”

“Today is a landmark day for our city,” said Speaker Corey Johnson. “New York is sending a clear message to people who are transgender, gender non-conforming and non-binary that we are here for you. This law will help those friends, neighbors and colleagues better self-identify on their birth certificates, a document that’s so important in everyday life. I am proud of my Council colleagues, the administration, and advocates for making this a reality.”

The law calls for the creation of a third gender to appear on birth certificates issued by the City of New York. In addition to the “male” and “female” designations, birth certificates will also show an “X,” allowing gender non-binary people who identify neither as men nor women to have a birth certificate that more accurately reflects their identities.

These changes recognize that transgender and gender non-binary people are best equipped to articulate who they are and signals a strong commitment from the city to decrease the vulnerability these communities experience in accessing housing, employment, healthcare, and other vital services, where mismatched identity documents can lead to discrimination, harassment, and mistreatment.

With this new law, New York City will join jurisdictions across the country and the world in adding a third “X” gender option to official government documents, including Oregon, California, Washington and New Jersey (for birth certificates) and Oregon, Maine, California, and Washington, D.C (for driver’s licenses). Canada, Germany, New Zealand, and Pakistan are among countries who provide a gender neutral option on passports.

“Today is a historic day. Beginning January 1, New Yorkers will be able to choose a non-binary gender-marker on their birth certificate and self-attest to changing their gender on their birth certificate,” said Acting Health Commissioner Dr. Oxiris Barbot. “None of this would have been possible without the work of the New York City Gender Marker Change Advisory Board, the City Council, and all the members of the transgender community whose dedication, work and perseverance made this possible. I want to thank Mayor de Blasio, Speaker Corey Johnson, and the Board of Health as we work toward a more equitable city, one that reduces stigma, eliminates barriers, and promotes the health of all transgender, gender nonconforming, and non-binary New Yorkers.”

“As leaders in Washington, including our newest Supreme Court Justice, threaten to chip away at the hard-fought rights of LGBTQ Americans, New York City continues to be a beacon of hope and model for the world,” said Matthew McMorrow, Senior Advisor for LGBTQ Community Affairs, Mayor’s Community Affairs Unit. “By legally recognizing a non-binary gender and allowing New Yorkers to self-attest to their own gender identity, we are living up to some of our City’s core values of self-expression and self-determination. Our non-binary, gender non-conforming, intersex and transgender communities will no longer be invisible, and they will be granted the dignity and respect they rightly deserve.”

“This legislation is a historic and vital step forward for our city and country,” said Ashe McGovern, Director of the NYC Unity Project. “As a non-binary trans person, I intimately understand the discrimination our communities face as a result of mismatched or inaccurate identity documents. With this move, the Mayor is signaling clearly that New York City sees us, hears us, and deeply supports our fundamental right to self-determination.”

“The legislation signed today is neither a radical nor unique action,” said Carrie Davis, health care consultant and Chair of the New York City Department of Health and Mental Hygiene’s Report and Advisory Board on Gender Marker Change Requirements. “Instead, it is a simple act of respect and humanity whereby the Mayor, City Council and Department of Health and Mental Hygiene – in dedicated partnership with community members and advocates – work together to help ensure vulnerable transgender, gender non-conforming, and gender non-binary people born in New York City have the accurate identification they need to participate as full-fledged citizens in their communities. This can mean having the identification to get a job, a place to live, to travel, or even being able to obtain health care, among many things.”

“For too long, transgender, non-binary and gender nonconforming people, and older people in particular, have lived in the shadows, suffering widespread discrimination, high rates of violence, social isolation, and mounting health care barriers,” said Michael Adams, CEO of SAGE. “SAGE commends Mayor Bill de Blasio and the NYC Council on passing this critical legislation, which has a marked impact on so many transgender older New Yorkers – those who came of age during decades when transgender people were heavily stigmatized. For our city’s transgender elders, being able to obtain a birth certificate that matches their gender – without the need to go through a healthcare provider – is vital to assert their selfhood. Today, older transgender people, and all New Yorkers, know that the City has their back.”

“This simple change will help safeguard the rights of New Yorkers of all gender identities, especially transgender and gender non-conforming people. With birth certificates that correctly reflect many more people’s gender identities, New Yorkers will finally have accurate documents that are necessary for registering for school, obtaining health insurance, and applying for jobs,” said Donna Lieberman, Executive Director of NYCLU. “The NYCLU commends the city for this welcome step to treat all New Yorkers equally.”

“This is a matter of equality and access for non-binary New Yorkers to be recognized and respected for who they are. Everyone should have documentation that accurately reflects their identity so they are able to live openly and authentically;” said Ethan Rice, Senior Attorney, Fair Courts Project at Lambda Legal and Vice-Chair of NYC DOHMH’s Report and Advisory Board on Gender Marker Change Requirements. “All transgender and non-binary people have a right to recognition of who they are and must have the ability to attest to their identity themselves. We commend New York City for this historic legislation and thank Mayor de Blasio for signing a law that recognizes the diversity of the LGBTQ community and the need for accurate identity documents for transgender and non-binary people.”

“Gay Men’s Health Crisis (GMHC) applauds Mayor Bill de Blasio for signing a law that will allow individuals born in New York City to more easily change birth certificate documentation to reflect their gender,” said Cecilia Gentili, Managing Director of Policy at GMHC. “Under the new law, the process will no longer require a person to seek gender affirmation from a licensed medical professional to make these changes on birth certificates. The law will also allow for a non-binary or gender-neutral gender designation on these certificates, which can now be marked with an ‘X’ to avoid locking gender identities into one name. This new law gives power back to the transgender community to make their own changes, as they know themselves best.”

“The signing of the Gender Marker Bill is a crucial step towards making the lives of Trans and Gender Non-Conforming people much safer during these difficult times,” said Cristina Herrera, CEO and Founder of Translatina Network.

“While the world around us seems to be taking a shift backwards on issues relating to gender and gender expression, New York City continues to lead with integrity and compassion,” said Sean Coleman, Executive Director of Destination Tomorrow. “Allowing folks to self-identify their gender without providing ‘proof’ is the validation my community needs.”

“As a leading provider of care for individuals of transgender experience in New York City, we know, first hand, the importance of a person’s ability to self-identify their gender,” said Dr. Freddy Molano, Vice President of Infectious Disease and LGBTQ Services at Community Healthcare Network. “This is a tremendous win that will impact the treatment and care available to our patients. We applaud Speaker Johnson, the New York City Council and Mayor Bill de Blasio for this historic legislation.”

“Not everyone identifies with the male and female gender. There are a lot of people who are non-binary, gender non-conforming and intersex whose gender goes beyond the conventional gender norm of men or women. It’s extremely important that these people have easy access to documents that allow them to live and do errands that fit their identity,” said Samy Nemir Olivares, co-founder of Queeramisú – LGBTQ leaders of color for Equality. “New York City once again demonstrates it is a leader at the forefront of LGBTQ rights, this time recognizing third gender or non-binary gender.”

“Trans and gender non-conforming New Yorkers need identifying documents that reflect their gender identities and make the person feel more confident in who they are, without having to jump through hoops with doctors and psychologists. Having affirming identity documents help TGNC people move around in the city and feel safer knowing that they have documentation that affirms who they are,” said LaLa Zannell, Lead Organizer, New York City Anti-Violence Project. “The community members I work with who identify as gender non-conforming or non-binary have been waiting for this, and it is an important step for the city to see the importance of folks who identify as non-binary. The spectrum of trans identities is a big one, and non-binary identities are too often left out of the conversation.”

Here’s the video from the event:

“I wish to thank Mayor Bill de Blasio, Speaker Corey Johnson and the City Council for recognizing the next step in our gender identity movement. It is important that young people be empowered to explore their identities in a manner that is relevant to them,” said Melissa Sklarz, a prominent Trans rights advocate. “As a native born New Yorker, I am happy that New York joins other cities in looking to the future to protect their citizens in their quest for civil rights and identity.”