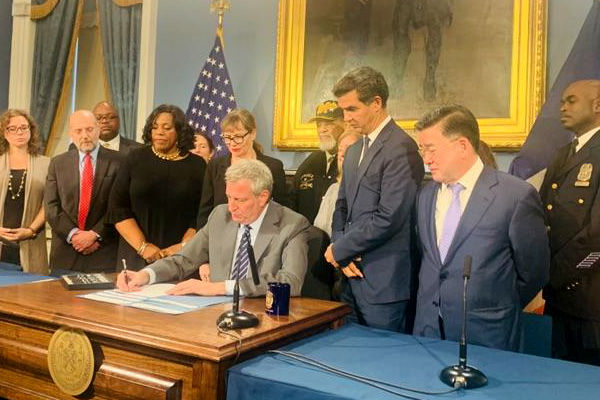 Mayor de Blasio today signed the Dangerous Vehicle Abatement bill into law, the latest step in the Administration’s Vision Zero plan to make New York City’s streets safer. The bill was introduced by Council Member Brad Lander and passed City Council with an overwhelming majority. The new law targets the most reckless drivers by allowing the City to seize and impound vehicles with 15 or more school speed camera violations or 5 or more red light camera violations during a 12-month period unless the registered owner or operator completes a driver accountability course.

“This is a major step toward our goal of achieving Vision Zero,” said Mayor Bill de Blasio. “We are putting all drivers on notice that if you behave recklessly behind the wheel, there will be real consequences. This law will make our streets safer for all New Yorkers, and I thank Council Member Lander for leading the charge.”

“We thank Mayor de Blasio for signing this landmark legislation, a monumental step forward for Vision Zero,” said DOT Commissioner Polly Trottenberg. “We know that vehicles with the highest number of red light and speed camera violations are significantly more likely to be involved in serious crashes. Through an unprecedented program of education and enforcement, including the possible loss of a vehicle, this new law will help us change driver behavior so we can keep driving down traffic deaths and serious injuries.”

“This bill being signed into law is a major step forward in this Council’s fight for safe streets,” said Council Speaker Corey Johnson. “I congratulate Council Member Lander for his tireless work to get to where we are today and I thank the safe streets advocates who were there by our side in this fight every single day. The Council is proud of our efforts to combat traffic violence and we will continue to build on this success in our ongoing fight for a city where people don’t have to live in fear of death or injury from cars.”

“Today we are taking a big step forward to make our streets safer. The Dangerous Vehicle Abatement Program will be the first in the country to hold owners of the most dangerous vehicles accountable for the impact on the safety of their neighbors. Thanks to the diligent work of the de Blasio Administration, the support of my colleagues in the City Council, and the indispensable advocacy of Families for Safe Streets members, Transportation Alternatives and so many others who kept us focused on the life-and-death stakes of reckless driving, we are breaking new ground with a data-driven, restorative justice approach to end dangerous driving,” said Council Member Brad Lander.

“The Dangerous vehicle abatement program will ensure that only the safest drivers remain on the road and will create a deterrent for drivers who refuse to correct their actions. I want to thank the Mayor, Speaker Johnson, Council Member Brad Lander, and advocates for all the work they have done to ensure that all pedestrians, cyclists, and drivers are safe on New York City Roads,” said Council Member Ydanis Rodriguez, Chairman of the Transportation Committee. “Working together, we are implementing laws with the determination to accomplish our goal of making our streets safer and reduce the number of deaths in the City to zero for all pedestrians and cyclists. I will continue working alongside the Mayor, Speaker Johnson and my colleagues to ensure we make New York City safer for all New Yorkers.”

Introduced by Council Member Brad Lander, Intro 971 will create a dangerous vehicle abatement program. Owners of vehicles with 5 or more red light camera violations or 15 or more school speed camera violations incurred within 12 months may be required to take a safe vehicle operation course overseen by DOT. If an owner fails to complete the course, their vehicle may be seized and impounded by the City Sheriff. Officials estimate that the new law will affect about 3,000 to 6,000 vehicles, or less than 1 percent of the nearly 2 million vehicles registered in the city. The law will take effect on February 26, 2021 and apply to red light camera and school speed camera violations incurred after October 26, 2020. The program will run for 3 years, at which point the Mayor and Council will decide to renew or modify this effort.

New York City school zone speed cameras issue violations to vehicles traveling more than 10 miles per hour over the posted speed limit. Both speeding and red light violations carry a $50 fine. DOT currently operates more than 600 speed cameras in school zones around the five boroughs. By the end of 2021, the number of cameras across the city is expected to reach 2,000. The city also operates red light cameras at 150 intersections.

“As the New York City Sheriff, one of my biggest priorities is to ensure the safety of all New Yorkers, and my office is ready to do its part and help keep dangerous drivers off the roads,” said NYC Sheriff Joseph Fucito. “I look forward to working with members of the de Blasio Administration, City Council and other city agencies to put this program in place and encourage safe driving habits.”

“The NYPD is proud to stand with the community in support of today’s signing of the Reckless Driver Accountability Act”, said Inspector Michael Hurley, Executive Officer of the NYPD’s Transportation Bureau. “The Department will strive to enhance the lifesaving benefits of this bill by continuing its focus on eliminating dangerous driving behavior.”

“This landmark program is the first of its kind in the nation, and will make our city safer for everyone by addressing the threat of reckless drivers,” said Danny Harris, Executive Director of Transportation Alternatives. “No one should have to fear death or serious injury on New York City streets. We thank Mayor de Blasio for enacting this legislation.”

“The Center for Court Innovation commends the Mayor, DOT, and the City Council for embracing alternatives to curb risky driver behavior that in some cases remains undeterred, and can lead to death and serious injuries, through a restorative approach with accountability and consequences,” said Adam Mansky, Director of Criminal Justice for the Center for Court Innovation. “In the Center’s Driver Accountability Program, currently providing an alternative to fines or short jail time in several City courts, a trained facilitator uses exercises and discussion to raise participants’ awareness of the harms of dangerous driving behaviors and to identify and commit to strategies to improve their driving.”

Photo credit: The photograph is a representation of the event.