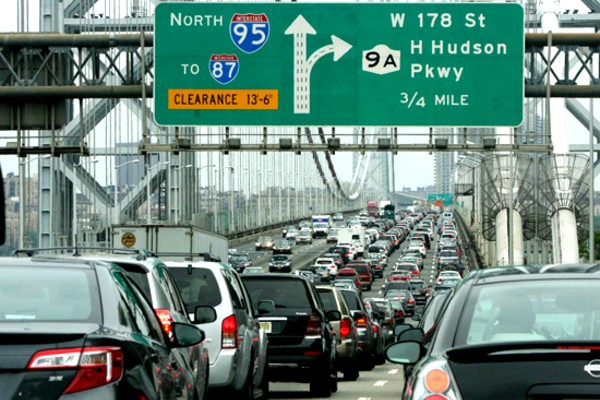 The mayor also called on the MTA to work faster to advance this crucial first-in-the-nation program, which will charge private vehicles for entering Manhattan’s Central Business District.

“Sherif Soliman has the vision and expertise to get the Traffic Mobility Review Board moving and deliver a congestion pricing plan that works for everyone,” said Mayor Bill de Blasio. “The MTA should meet its obligation to convene experts like Sherif on this board and kick this process into overdrive. Congestion pricing will ease traffic and fund mass transit, and New Yorkers can’t wait any longer to get it started.”

“Congestion pricing is a game-changer – it will generate billions for mass transit investments, mitigate the ills of traffic congestion, improve air quality, and provide many more benefits for New Yorkers,” said Department of Finance Commissioner Sherif Soliman. “A successful launch in America’s largest city will further validate congestion pricing as a paragon for sound transportation policy, and I thank the Mayor for recommending me to serve on a board that will play a pivotal role in the program’s design. I look forward to the MTA’s consideration of my candidacy.”

The mayor urged the MTA to follow a more aggressive timeline for crucial parts of the congestion pricing launch, including:

The six-member Traffic Mobility Review Board, created by the 2019 congestion pricing law, is charged with soliciting public input on congestion pricing program parameters and making recommendations on toll amounts, exemptions, discounts and other program elements to the MTA Board for approval.

The law also requires that members have experience in at least one of the following areas: public finance, transportation, mass transit, or management.

Revenues will provide billions for the subway system’s signals, track, accessibility, and other critical transit infrastructure.

“New Yorkers cannot wait any longer for a modernized mass transit system, congestion-free streets, and improved air quality where they live and work,” said Ben Furnas, Director of the Mayor’s Office of Climate and Sustainability. “Commissioner Sherif Soliman is a terrific choice for the board to ensure that the congestion pricing program will quickly and equitably deliver these much-needed benefits to all New Yorkers and fight climate change at the same time.”

“As more New Yorkers start heading back to work and tourism picks up, meaningful investments to make our public transportation system more reliable and accessible will be critical to support our city’s economic recovery,” said State Senator Jessica Ramos. “Speeding up congestion pricing will mean we can raise the necessary funds for long-overdue repairs to the MTA, clear up the traffic on our streets and allow New Yorkers to breathe cleaner air.”

“A quick and effective implementation of congestion pricing is necessary to generate the dedicated revenue the MTA needs to modernize our mass transit systems. The recommendation of Sherif Soliman to the Traffic Mobility Review Board is the right person to expedite the implementation of this first in the nation program,” said Assembly Member Robert Carroll.

“It is great to see a fellow Staten Islander being recommended for this position. If he deservingly gets the position, I look forward to working with Sherif on congestion pricing and many other critical transportation-related issues for the North Shore,” said Assembly Member Charles D. Fall.

“Congestion pricing is a plan and a promise whose time has come. Without it, we can expect the decreased quality of service on our subways, more air pollution from vehicles, and the maddening frustration of endless traffic jams. I congratulate Sherif Soliman on his recommendation to the Traffic Mobility Review Board and thank Mayor de Blasio for his insistence that this plan moves forward without delay. For the health of our city and as a model for the rest of the nation, congestion pricing must be up and running no later than the end of 2022,” said Assembly Member Emily Gallagher.

“Though congestion pricing will be a great step to get our city’s economy back on track, I am invested in ensuring qualified individuals sit on the Traffic Mobility Review Board. My District 29 Queens community deserves a diverse and understanding team that comprehends the uniqueness of our ongoing transportation desert. Commissioner Soliman will serve as a great addition in creating equity in pricing for my community,” said Assembly Member Alicia Hyndman.

We have seen the benefits that congestion pricing has had in other cities, we know the importance of Second Avenue Subway Phase 2 to East Harlem and the Borough, and we know that it will reduce traffic and air pollution in the future.

“We cannot wait until our subway system falls deeper into disrepair. Now is the time to implement congestion pricing because the threat of climate change is imminent, and the sooner we turn traffic congestion into revenue for the MTA, the better the state of our mass transit will be. We have seen the benefits that congestion pricing has had in other cities, we know the importance of Second Avenue Subway Phase 2 to East Harlem and the Borough, and we know that it will reduce traffic and air pollution in the future. I applaud Sherif Soliman’s appointment on the Traffic Mobility Review Board to advance this initiative and change transit in New York City before it’s too late,” said Assembly Member Robert Rodriguez.

“Congestion pricing was an enormous victory for New York State in ensuring a dedicated funding stream for mass transit and a commitment to reducing traffic and improving air quality. With the significant obstacles New York’s commuters face every day, it is clear that the MTA should launch congestion pricing and convene the Traffic Mobility Review Board as soon as possible. I congratulate Commissioner Soliman for being recommended to serve on the TMRB,” said Assembly Member Jo Anne Simon.

“Congestion pricing will put fewer cars on the road and more funding toward mass transit, which means better commutes for the pedestrians, bicyclists, and drivers who actually live in our city,” said Council Member Ben Kallos. “I have advocated for this on behalf of residents for nearly four years and will keep pushing until it is implemented. I trust that under Sherif Soliman’s leadership, the Traffic Mobility Review Board will turn this plan into our reality, cementing New York City as a leader in transportation.”

“Congestion pricing will bring much-needed funding to our transit system, and make it easier for all New Yorkers to get around. Sherif Soliman has the expertise and leadership to launch a congestion pricing plan that will not only act with urgency but work for everyone. He’s a great choice,” said Council Member Keith Powers.

Our mass transportation system is in desperate need of critical infrastructure investments.

“Our mass transportation system is in desperate need of critical infrastructure investments. Last week we saw the impact that rain had on our transportation system, countless videos of New Yorkers having to make their way through flooded subway stations. Many stations in underserved communities have been left behind for decades. We need to invest in the communities that need it the most,” said Council Member Ydanis Rodriguez, Chairman of the Transportation Committee. “Traffic has steadily increased across the City, gridlocking many areas. Congestion pricing will help us decrease the number of vehicles driving in New York City below 60th street. It’s estimated that congestion pricing would bring an estimated 15 billion dollars generated over 4 years. Congestion pricing will help the City make a strong comeback as New Yorkers return to work and school. I look forward to continuing to work alongside Mayor de Blasio, Speaker Corey Johnson, and the MTA to ensure we get Congestion Pricing up and running as soon as possible.”

Once in place, congestion pricing will result in lower carbon emissions and improved air quality, reduced traffic, and a critical increase in revenue for the MTA.

“I congratulate Commissioner Soliman on his appointment and look forward to the implementation of congestion pricing. Once in place, congestion pricing will result in lower carbon emissions and improved air quality, reduced traffic, and a critical increase in revenue for the MTA. This will be a long-term win for New Yorkers,” said Council Member Helen Rosenthal.

“We welcome the nomination of Sherif Soliman and join the Mayor in calling upon the MTA to convene the Traffic Mobility Control Board without delay.  The city’s economic recovery for all New Yorkers cannot be accomplished if we don’t have a safe, reliable, and well-funded public transit system. The facts confirm that New Yorkers from all five boroughs, and especially the working poor, will benefit from the swift implementation of congestion pricing,” said Eric A. Goldstein, New York City Environment Director at the Natural Resources Defense Council.

“We can’t drive our way out of the climate crisis. We need congestion pricing to go from vision to reality as soon as possible now that Washington has given NY the go-ahead. The program is a win-win-win for our environment, public health, and transportation.  It will significantly improve our air quality, reduce emissions and climate pollution, and invest in our mass transit system throughout the region. Thank you Mayor de Blasio for naming Sherif Soliman to the Transit Mobility Review Board and calling for the program to get on track,” said Julie Tighe, President of the New York League of Conservation Voters.