“Outdoor dining has kept New Yorkers safe and healthy and supported the restaurants that keep our city vibrant. And the Open Streets: Restaurants program has reimagined our urban landscape and drawn on our greatest resources: creativity and resilience,” said Mayor Bill de Blasio. “I’m proud to offer even more options for New Yorkers to enjoy a meal outdoors, and I look forward to expanding the program further.”

“Now that Open Restaurants has already changed the look and feel of ‘Summer in the City,’ it’s now poised to be part of ‘Autumn in New York’ as well, as outdoor dining will expand to more hours and more locations – from the South Bronx to the West Village,” said DOT Commissioner Polly Trottenberg. “We remain grateful to Mayor de Blasio and all our agency and community partners for the vision and dedication that have sustained a team effort that has saved almost 100,000 jobs – and one which we now look forward to continuing year-round.”

“Open Streets and Outdoor Dining have been two bright spots in these dark times, and I’m proud to keep expanding both these initiatives in my district and throughout the five boroughs. We must continue working to give New Yorkers more open space and to support our restaurants and small businesses as best we can during and after this pandemic,” said Council Speaker Corey Johnson.

Also:  Martin, Mariano And Others Assist The Buoniconti Fund To Cure Paralysis (Photographs)

Weekend outdoor dining at the new locations will begin as early as today, Friday, October 2, 2020, with days and times varying by location. Hours for each participating location can be found on the Open Streets: Restaurants homepage. 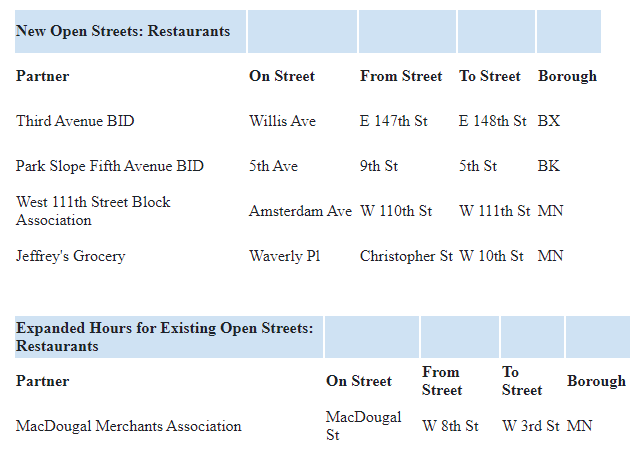 Mayor de Blasio today also announced that the following areas will be added to the Open Streets program, which makes roadway space available for socially distanced recreation on 80 miles of streets citywide:

“I am very happy the merchants in Murray Hill came together in partnership with Asian American Federation and the city to support of the Open Restaurants program in Flushing. This is an innovative approach to dining that will bring the customers and character back to our neighborhoods,” said Council Member Peter Koo.

“The Open Streets: Restaurants program has provided a lifeline for restaurants across our city, while transforming for the better the way we all use and interact in our streets. I’m excited for the Open Restaurant street in partnership with the Park Slope Fifth Avenue Bid, to help support restaurants right here in the heart of Park Slope, and in front of our office,” said Council Member Brad Lander.

Open Streets operate from 8:00 AM to 8:00 PM, with timing varying slightly depending on staff availability. No through traffic is permitted, with remaining vehicle traffic limited to local deliveries, pick-ups/drop-offs, necessary city service vehicles, and emergency vehicles only. These drivers are alerted to be hyper-vigilant and to drive at 5 MPH along these routes.

Also:  The Best Online Games That Take Place In The Fictional Worlds