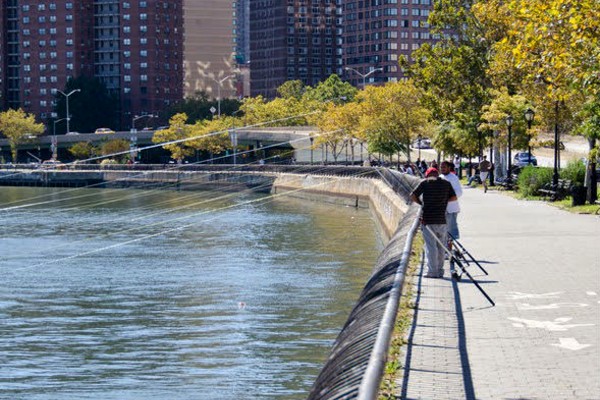 The promenade above the FDR Drive between E. 81st and E. 90th streets. The $80 million projects will bring needed state of good repair improvements to the 1930s top-level structure.

“John Finley Walk is an incredible spot to take a stroll and enjoy the waterfront,” said Mayor Bill de Blasio. “These infrastructure improvements will ensure New Yorkers will be able to enjoy this beautiful promenade for generations to come.”

“Investing in parks and open space is critical as we continue to recover from the COVID-19 pandemic,” said Deputy Mayor for Operations Laura Anglin. “Repairing John Finley Walk’s infrastructure will ensure all New Yorkers continue to have access to this open space for walking, running, biking and more.”

“Our public spaces are critical to the health of our city, and their restoration is critical to our City’s comeback,” said Deputy Mayor for Housing and Economic Development for Vicki Been. “We are proud to announce this investment to rehabilitate the John Finley Walk, a well-loved, waterfront promenade in the Upper East Side. With this investment, we hope that it can serve many generations of New Yorkers!”

“John Finley Walk is a treasured part of Carl Schurz Park and an important link to the East River Esplanade, and this project will provide upgrades and make needed repairs to the 80-year-old structure,” said NYC Parks Commissioner Mitchell J. Silver, FACIP. “Thanks to funding from Mayor de Blasio and project management by the experts at DOT, the promenade will continue to connect the Upper East Side community to the waterfront for decades to come.”

“As New York City reopens and recovers, we must continue investing in the open spaces that we all love, including our incomparable waterfront,” said DOT Commissioner Hank Gutman. “Finley Walk, so popular with Upper East Side pedestrians, runners, and cyclists, is a gem — and the funding the Mayor has announced today will extend its life by decades, as well as make it safer and more welcoming. We are always excited to work alongside our partners at NYC Parks, and we thank Council Member Ben Kallos and Congressmember Carolyn Maloney for their tireless advocacy of this project.”

The project, which is being managed by the Department of Transportation on behalf of NYC Parks, will implement structural repairs to the underside of the deck, repair walls along the roadway, and replace concrete girders.

Parks and DOT plan to present information to Community Board 8 on June 10, 2021. The full project details and timeline will be determined during the design process.

“$80 million to rehabilitate John Finley Walk and the surrounding areas is a phenomenal way to start off our summer and kick our recovery into high gear,” said Council Member Ben Kallos. “Through persistence and good cooperation with city agencies and the Mayor, we have secured hundreds of millions of dollars over the years to improve our waterfront. This funding for John Finley Walk is no different. I am elated to learn it is finally coming and proud to have worked alongside Congresswoman Carolyn Maloney to make it happen. Thank you to Mayor de Blasio, the Parks Department, and the Department of Transportation for being committed to these plans. Can’t wait to see them finished.”

Related:  New Book Rise Up, Confronting A Country At The Crossroads By Rev Al Sharpton

“The past 15 months of COVID-19 have only made more clear just how essential open, outdoor spaces are to New Yorkers,” said Congresswoman Carolyn B. Maloney. “John Finley Walk is a wonderful space beloved by the children who play here, the athletes who bike and run on it, and all the New Yorkers who find respite here from being stuck indoors. Even before the pandemic, East Siders felt the strain of living with some of the least park space per capita in the city. I applaud the City of New York for its $80 million plan to repair and improve John Finley Walk.”

“I’m encouraged to see DOT and the Parks Department continue to invest in our City’s parks and open space,” said Manhattan Borough President Gale A. Brewer. “The COVID-19 pandemic has proven how life-saving our open space can be and it is of the utmost importance we keep it in good condition.”

“Open space is precious on the Upper East Side, and access to the river even more so. That’s why it’s so important that we invest in maintaining the gems that we have, like John Finley Walk, to ensure that they remain accessible for all New Yorkers to enjoy now and in the future. I thank Mayor de Blasio and his administration for prioritizing this important project,” said State Senator Liz Krueger.

“We are thrilled that $80 million has been allocated to repair and rejuvenate our promenade between 81st to 90th Street. This work is so needed and is a safety measure for pedestrians, eliminating uneven walking surfaces, improving drainage, replacing railings, and street lighting and benches. I commend the Mayor’s Office, NYC Parks, and DOT for their coordination of efforts to make these repairs a reality,” said Assembly Member Rebecca Seawright.

The funding is in addition to more than $300 million previously invested under this administration to rehabilitate waterfront infrastructure in the area:

The promenade connects with the East River Esplanade and is part of Carl Schurz Park, which was named for the soldier, statesman, and journalist Carl Schurz in 1910.

This picturesque park includes Gracie Mansion and offers views of the East River, the Roosevelt Island Lighthouse, and Randall’s Island.