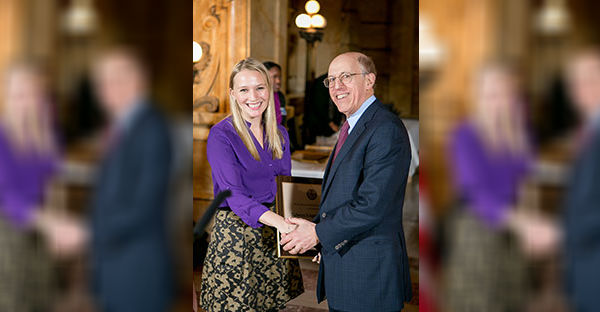 Today, Mayor Bill de Blasio announced the promotion of Rebecca Kagan Sternhell to the position of Director of Federal Affairs. She previously served as Deputy Director and General Counsel.

In her new role, Rebecca will be responsible for crafting and overseeing federal policies for the Mayor’s Office in coordination with relevant City agencies, as well as developing and implementing the Office’s strategic priorities. She will also manage external relations with the New York City Congressional Delegation, the White House, and Federal Agencies.

“In these turbulent times, New Yorkers can count on Rebecca Kagan Sternhell to fight for their interests and values on the federal level,” said Mayor de Blasio. “I look forward to working with her on policies that will benefit people across our City.”

“It’s been an honor serving the people of New York as their advocate in Washington, and I thank the Mayor for allowing me this opportunity,” said former Director of Federal Affairs Matthew McNally. “His choice of Rebecca to lead the New York City Federal Affairs office is a phenomenal one. Rebecca has been at the forefront of our efforts to advocate for the people of New York City in front of the Federal government. She will be an asset to the city and the people who live in it. “

Rebecca Kagan Sternhell was most recently the Deputy Director and General Counsel for the Office of Federal Affairs. She previously served as the Deputy Assistant Administration at the U.S. Small Business Administration. Prior to that, she served as Assistant Corporation Counsel in the Division of Legal Counsel and in the Mayor’s Office of Federal Affairs for the New York City Law Department in Washington D.C, where she handled both legal matters and legislative affairs.

Before 2012, she was a law clerk for the Senate Judiciary Committee Subcommittee on Privacy, Technology, and the Law for Senator Al Franken. Sternhell also worked as an analyst for the New York City Office of Management and Budget, and was Coordinator of the College Group at the Met, a program she developed at the Metropolitan Museum of Art.

Sternhell received her J.D. from the Fordham University School of Law, her Masters of Public Administration from the New York University Robert F. Wagner Graduate School of Public Service, and her B.A. in Interdisciplinary Field Studies from the University of California, Berkeley.