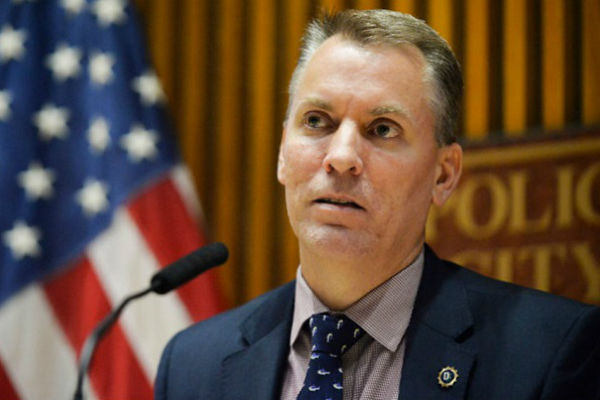 Mayor de Blasio today announced that Dermot Shea will be the next Commissioner of the New York Police Department. Shea began his service as a police officer in 1991, a year New York City faced more than 2,000 murders, and rose through the ranks to become Chief of Detectives, where he has overseen the criminal investigations in the city in addition to targeted efforts to prevent crime from happening.

As the next Police Commissioner, Shea will apply precision policing and Neighborhood Policing to target gang-related violence, take guns off the streets and continue the city’s remarkable reduction in crime. He will take office on December 1st, 2019.

“Dermot Shea is a proven change agent, using precision policing to fight crime and build trust between police and communities. As Chief of Crime Control Strategies and then Chief of Detectives, Dermot was one of the chief architects of the approach that has made New York City the safest big city in America. Dermot is uniquely qualified to serve as our next Police Commissioner and drive down crime rates even further,” said Mayor Bill de Blasio. “On behalf of all New Yorkers, I want to express deep gratitude to Jimmy O’Neill for dedicating his entire career to keeping our city safe. Jimmy transformed the relationship between New Yorkers and police, and helped to make the Department the most sophisticated and advanced in the country.”

“This is a tremendous honor and a tremendous responsibility and I’m grateful to the Mayor for this privilege to serve,” said Chief of Detectives Dermot Shea. “Police Commissioner O’Neill has been a mentor and a friend to me, and I am committed to building on the incredible success of Neighborhood Policing and precision policing while continuing my life’s work to eradicate gangs and guns from our streets. Every New Yorker deserves to be safe and feel safe, and that has been my mission since I took the oath and became a police officer 28 years ago. As Police Commissioner, this will be what drives me.”

“Dermot Shea has exactly the experience and skill to continue to drive down crime, strengthen relationships with the community members we serve and make sure every neighborhood has the safety they deserve,” said Police Commissioner James P. O’Neill. “We cannot take the historic crime reductions in New York City for granted, and Dermot’s understanding of the complex issues that lead to crime and disorder, as well as the most effective strategies for addressing these issues, is as good as it gets in policing today.”

Commissioner James O’Neill has presided over the lowest crime rate in New York City since the NYPD started tracking major crime, as well as the fewest number of homicides recorded since the 1950s. The architect of Neighborhood Policing, he oversaw the expansion of Neighborhood Coordination Officers to every precinct, Police Service Area and transit district as well as reforms to department policy that drove down crime and simultaneously reduced arrests for low-level offenses.

Shea began his service as a police officer in 1991, a year New York City faced more than 2,000 murders. He rose up the ranks to serve as precinct commander of the 44th and 50th precincts in the Bronx where he oversaw a dramatic reduction in gun violence.

In 2014, Shea was appointed Chief of Crime Control Strategies and Deputy Commissioner for Operations, where he oversaw the CompStat system and honed a new generation of precision approaches that helped drive crime to record lows. He focused the Department not just around arrests, but around intelligence-driven prosecutions in close cooperation with District Attorneys to take dangerous criminals off the street. Shea’s role required him to constantly shift resources to respond to real-time crime trends. In 2018, Shea was promoted to Chief of Detectives, where he oversaw all of the Department’s investigatory operations, including every criminal investigation in the city. Shea overhauled the Special Victims Division to strengthen NYPD’s commitment to survivors of sexual assault.

Shea grew up in Sunnyside, Queens, the son of Irish immigrants. He holds a Bachelor of Science from SUNY Oneonta. He and his wife Serena live in Manhattan and have three children: Jackie, Lauren and Richie, as well as grandson, Aidan, and a dog named Miley.