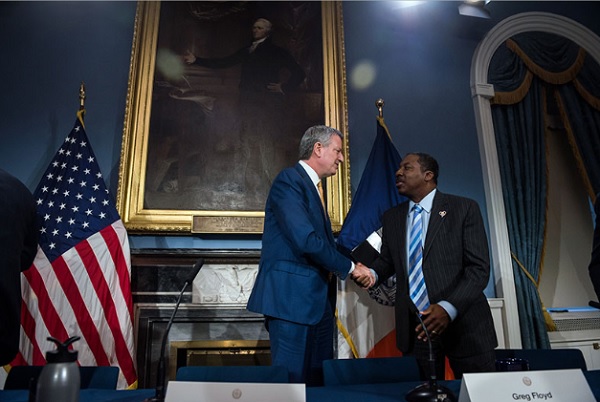 The contract agreement would benefit more than 1,300 maintenance workers citywide – including approximately 1,000 New York City Housing Authority maintenance workers – and nearly 400,000 NYCHA residents. Under this agreement, NYCHA maintenance workers will perform basic repairs seven days a week as part of their regularly scheduled work week for the first time in NYCHA history – a groundbreaking change that will overhaul how the Authority addresses its residents’ needs.

“With expanded work hours, our maintenance workers are going to help improve the lives of nearly 400,000 NYCHA residents by offering basic repairs faster and more frequently,”

“We’re taking a major step forward in providing services that will improve the lives of NYCHA residents,” said Renee Campion, Commissioner of the Mayor’s Office of Labor Relations. “This agreement will expedite repairs more frequently. Together, we were able to address both the needs of the workers and the needs of New York City taxpayers. I want to thank Teamsters Local 237 President Greg Floyd for working on this agreement and maintaining a respectful labor dynamic.”

“Having maintenance workers onsite at our developments all week long will ensure public housing residents receive the repairs they need and deserve,” said NYCHA Interim Chair and CEO Kathryn Garcia. “This agreement highlights how labor management cooperation can be a win for our employees and a win for our residents. With our partners at Local 237, NYCHA will continue to move forward to maintain affordable housing for all New Yorkers.”

“Our maintenance staff being on the ground seven days a week is a critical part of how the Authority will effectively preserve public housing and be the better landlord that our residents deserve,” said NYCHA General Manager Vito Mustaciuolo. “We thank Local 237, NYCHA’s Human Resources team, and the Office of Labor Relations for their commitment to both our residents and our hardworking staff.”

This agreement covers a period from December 17, 2017, through January 1, 2022, and includes wage increases of 2.00 percent, 2.25 percent, and 3.00 percent that conform with recent agreements reached by District Council 37 and the United Federation of Teachers for the 2017-2021 round of bargaining.

This agreement covers a period from December 17, 2017, through January 1, 2022, and includes wage increases of 2.00 percent, 2.25 percent, and 3.00 percent that conform with recent agreements reached by District Council 37 and the United Federation of Teachers for the 2017-2021 round of bargaining.

The gross cost of this agreement is $42.2 million, some of which is offset by $8.5 million in healthcare savings for a net cost of $33.7 million. This agreement will not require any additional funds to be added to the financial plan.

NYCHA maintenance workers are responsible for the routine operation and repair of buildings, public spaces and NYCHA apartments, such as fixing leaky faucets, doors, lights, and windows, among other repairs. This agreement comes after the Administration’s first work rule agreement with Teamsters Local 237, which was reached in December 2018 and implemented alternate work schedules for more than 2,700 NYCHA caretakers that expanded coverage to early mornings and Saturdays and Sundays until 7:00 p.m. Under the new agreement, both currently employed and newly hired Maintenance Workers at NYCHA developments can be assigned to one of four schedules:

The agreement also establishes the creation of a labor-management committee to discuss promotional opportunities for maintenance workers to prevailing wage titles.

Teamsters Local 237 membership must still ratify the agreement. This settlement continues the Administration’s promise to restore a productive relationship with the City’s workforce, all of whom were not under contract at the beginning of the Mayor’s first term.