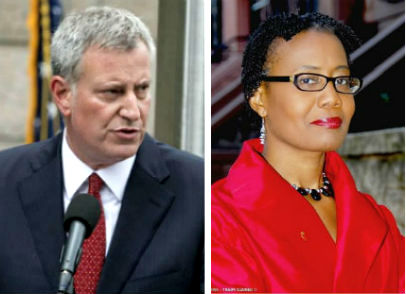 The agency is tasked with supporting City agencies in dismantling institutional barriers for women, girls, and New Yorkers of all gender identities and expressions.

The new members bring a wide array of experience across various industries to the Commission, including advocacy, fundraising and communications skills across the nonprofit, government and corporate sectors, among others. The new members are:

“We can’t be the fairest big city if we don’t make sure all New Yorkers – regardless of gender – can live up to their full potential,” said Mayor de Blasio. “These new members will bring invaluable expertise to the Commission and help us strengthen opportunities for all who self-identify as women in New York.”

“The Commission on Gender Equity helps support women, girls and all who identify as female, which is so important in the times we live in. Council Members Diana Ayala and Carlina Rivera are model public servants and inspirations to women all over this city, which is why I am proud to appoint them to the CGE,” said Council Speaker Corey Johnson. “I look forward to seeing them work alongside First Lady Chirlane McCray, Majority Leader Laurie Cumbo, Council Member Helen Rosenthal, the Council’s Deputy Chief of Staff for Legislation and Policy Laura Popa and the entire Commission in promoting gender equity across the city and helping female New Yorkers reach their full potential.”

“I’m thrilled to welcome our new Commissioners, whose guidance and leadership will be indispensable as we work to ensure the sustainability of gender equitable practices and policies throughout New York City,” said Jacqueline Ebanks, Executive Director of the City’s Commission on Gender Equity.

“I am excited to welcome the new Commissioners. Their rich experience and diverse backgrounds will enhance the work the Commission has been doing in advancing women,” said Silda Palerm, Co-Chair of the Commission on Gender Equity.

The Commission on Gender Equity develops and supports policies that promote opportunities for cisgender and transgender women and girls in all areas, including employment, housing, childcare, education, health and reproductive justice, criminal justice, and public safety. It advises the Mayor and City Council on initiatives and methods to reduce gender-based inequality.

“At this particular moment in our political history, there’s no place I’d rather be than in a room filled with smart committed leaders in New York City committed to dismantling gender-based barriers,” said Chitra Aiyar, Executive Director, Sadie Nash Leadership Project. “I’m thrilled to be joining the Commission on Gender Equity and look forward to diving into the work to make New York City a role model for the nation.”

“I am honored to have been appointed to the City’s Commission on Gender Equity. Women are catalyzing essential change in our political arena and I am thrilled to support these efforts through my capacity as a member of the Commission. I would like to thank Speaker Johnson for appointing me and I look forward to working alongside my fellow members,” said Council Member Diana Ayala.

“We are at an inflection point in our society to address pressing economic and social injustices that continue to hold women and girls back from reaching their full potential. When our national leaders waiver in their support for women’s voices, it becomes even more critical for Cities to lead,” said Andrea Hagelgans, Executive Vice President for Public Affairs at Edelman New York. “One of my proudest moments in the administration was when Mayor de Blasio signed the Executive Order creating paid parental leave for New York City employees. I am excited to partner with First Lady Chirlane McCray and other City leaders to think creatively about policies to ensure that women’s opinions and experiences are heard and valued.”

“At this critical time in our country women are simultaneously leading in ways we have never lead before while our basic rights are being attacked on every side,”

“At this critical time in our country women are simultaneously leading in ways we have never lead before while our basic rights are being attacked on every side,” said Arva Rice, President and CEO of the New York Urban League. “In order to make sure the tide turns in the favor of dismantling discrimination based on gender and sexual orientation, efforts like CGE must be successful. I am thrilled to join this group of committed women in work to create policy, programs and recommendations for women and girls to reach their full potential.”

“I am honored to be appointed to the Mayor’s Commission on Gender Equity and look forward to working with CGE in its efforts to address and reduce institutional barriers that affect survivors of gender-based violence,” said Robina Niaz, Founder and Executive Director of Turning Point for Women and Families. “Together, we will put in place policies that ensure the full safety and security of women, girls and gender non-conforming folks across the board, and educate New Yorkers on the various inequities affecting women of color.”

“I want to thank Speaker Johnson for appointing me to the Mayor’s Commission on Gender Equity,” said Council Member Carlina Rivera, Co-Chair of the Council’s Women’s Caucus. “I’m honored to join a group of such fierce and inspiring New York women who are working to break down the divisions and barriers that keep so many women from succeeding and expressing themselves. From housing and child care to public safety, we must address issues of gender inequity across the board, particularly for women of color who face unique challenges in our city.”

The 32-member permanent advisory commission was formed by Executive Order in 2015, and was codified as Local Law 67 in September 2016. The Mayor and City Council Speaker each make appointments to the commission.

“Despite the many gains that women in various professions have made, there continue to be entrenched attitudes that undermine women’s efforts to be equal in society,” said Assembly Member Deborah J. Glick. “That we have to re-litigate the basic tenet that a woman should have full control over her own body demonstrates how far we still have to go. The scourge of domestic violence continues, but focusing on women will not solve a problem that seems to be rooted in the inability of men to respect women as equals. These inequities need to be addressed through systemic policy changes, and I commend the City for making a commitment to do that work. The commission has a long road to ravel, and I wish them well.”

“Together, the six new appointees to the City’s Commission on Gender Equity will lead New Yorkers into a new day where people of all genders are treated equally and with respect,” said Assembly Member Linda B. Rosenthal, Chair of the Committee on Alcoholism and Drug Abuse. In these difficult times when women’s and trans rights are under assault, it is vital that New York reaffirm its commitment to gender equity and by implementing policies that honor and celebrate our differences. I look forward to working closely together with these fine Commissioners, and particularly my colleagues in government who are superbly qualified to the task at hand, to make New York the most egalitarian city in the country.”

“I commend Mayor de Blasio and First Lady Chirlane McCray for the Commission on Gender Equity and the appointment of its newest members to fulfill the mission of dismantling institutional barriers for New York’s women and girls regardless of gender identity and expression,” said Assembly Member Rebecca A. Seawright. “It is critical that we support equity and bolster the opportunities for women and girls to access employment, housing, childcare, education, health, reproductive justice and safety.”

“I am thrilled to welcome the six new Commissioners to the Commission on Gender Equity, including my colleagues, Council Members Carlina Rivera and Diana Ayala. It is critical that we have a diverse range of voices and perspectives working to address the needs of women and combatting gender inequality in New York City,” said Laurie A. Cumbo, Council Majority Leader.

“As co-chair of the New York City Council Women’s Caucus, I offer my heartiest congratulations to the new members of the City’s Commission on Gender Equity. Collectively, they exemplify a tremendous commitment to equal opportunity and social justice, and to advancing and strengthening the voices of women and persons of other gender identities. I greatly look forward to working with the Commission to combat gender-based inequity in New York City in all its forms,” said Council Member Helen Rosenthal.

“The goal of true gender equity is one we must continue to work towards,” said Council Member Margaret S. Chin. “As we face a Federal Administration increasingly hostile to the very idea of equity, it is imperative that New York City take the lead. I have no doubt that the six new appointees to the Commission on Gender Equity, including my fierce colleagues Council Members Rivera and Ayala, will rise to the challenge and break down the barriers for women, girls, and New Yorkers of all gender identities.”