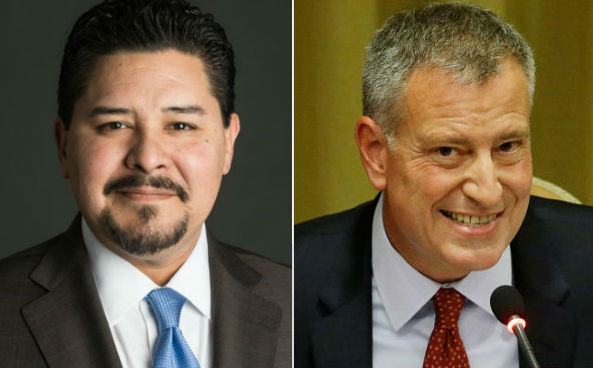 Mayor Bill de Blasio and Schools Chancellor Richard A. Carranza today announced New York City students’ gains on State English and math exams. In 2019, 47.4 percent of students met proficiency standards in English, a 0.7 point increase from 46.7 percent last year. City students outperformed their New York State peers on State English exams for the fourth year in a row. 45.6 percent of students met the standards in math, a 2.9 point increase from 42.7 percent last year. New York City students’ proficiency in both subjects improved across all ethnic groups. Additionally, the White-Black and White-Hispanic achievement gaps were narrower for students who attended Pre-K for All compared to those who did not, illustrating the long term benefit of the program.

“Test scores are in and the students who enrolled in Pre-K for All are still seeing the benefits years later. Our first class of Pre-K students are closing the opportunity gap and improving scores across the board,” said Mayor de Blasio. “Coupled with higher graduation rates and increased college readiness, we are moving in the right direction. There is still lots of work ahead, but the future is brighter than ever for students and their families.”

“Today we celebrate the hard work of New York City children, families and educators,” said Schools Chancellor Richard A. Carranza. “This progress, along with record-high graduation and college enrollment rates, is further evidence that our Equity and Excellence for All agenda is working, and for the first time, we’re seeing promising signs from our Pre-K for All initiative reflected in State test scores. We are more determined than ever to advance equity now and ensure all New York City public school students have access to the high-quality education they deserve.”

Grade 3 test takers had the highest proficiency of any grade in ELA and Math in New York City and their gains outpaced their New York State peers. A large and growing body of research has demonstrated that children enrolled in full-day, high-quality pre-K are better prepared to learn and be successful in later grades, and New York City parents with children enrolled save an average of $10,000 in childcare costs.

New York City schools are the strongest they’ve ever been across multiple measures, including:

5,000 more students are attending college than at the beginning of this administration.
The highest-ever number of New York City students taking and passing Advanced Placement exams and the SAT exam.

New York City students’ performance on State exams goes hand-in-hand with these gains, and reflects investments in the Mayor and Chancellor’s Equity and Excellence for All agenda.

State Senator Shelley B. Mayer, Chair of the Senate Education Committee said, “I am pleased to see the continued achievements of students in New York City.

Congratulations to the students and to the many educators and administrators throughout NYC who work tirelessly to deliver for students and their families. My colleagues and I are committed to securing the necessary funding and policies so that every school district throughout the state has the resources they need to provide a quality education. Congratulations also to NYS Schools Chancellor Richard Carranza and Mayor Bill de Blasio.”

“I am proud of the remarkable achievements New York City students and schools have made this year with gains in test scores, and a rising graduation rate. We still have work to do to make sure that every student in New York City — and State — has access to a high quality education, regardless of their zip code. I am grateful to the leadership of Mayor de Blasio and Schools Chancellor Carranza through their Equity and Excellence for All Agenda. I also want to acknowledge the efforts of students, their families, and the school teachers and personnel whose hard work got us here today,” said State Senator Alessandra Biaggi.

“Congratulations to the hardworking students in New York City! This is a testament to their dedication and hard work. I applaud Mayor De Blasio and Chancellor Carranza for their innovative ideas and desire to consistently aid our children in achieving the best education possible. I look forward to seeing the continued progress and working with all stakeholders in the city and the state to keep the momentum going in improving our education system.” State Senator Jamaal Bailey

“Being part of the effort to bring Pre-K for all to the children of our city has been a highlight of my legislative career,” said Cathy Nolan, Deputy Speaker of the NYS Assembly. “We are seeing the results of investing significant taxpayer dollars in our children’s education at the earliest ages. Congratulations to Mayor de Blasio for making this a priority and to so many talented dedicated public servants for making it a reality”

“These scores are very encouraging, especially in the program’s first year. Equally encouraging is seeing the racial achievement gap narrow among students who attended the full-day Pre-K program. It signals what full-day, high-quality Pre-K for All can mean to the city’s children. We will continue to follow New York City’s Pre-K for All program closely and monitor its impact on children in the years ahead,” said Ellen Frede, co-director of the National Institute for Early Education Research and an architect of New Jersey’s Abbott Preschool Program.

“This year’s results show that with proper supports, New York City public schools will only continue to show steady progress,” said UFT President Michael Mulgrew. “Our teachers know that work carries on and that our students are our priority.” 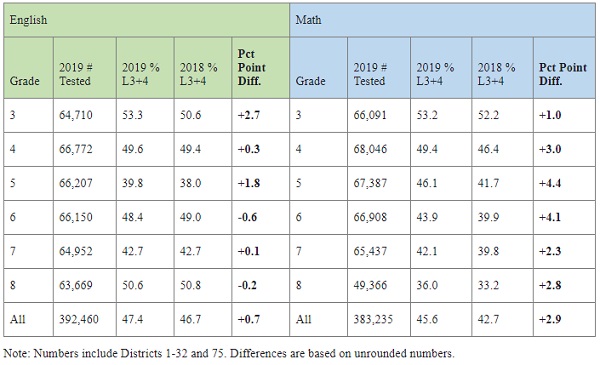 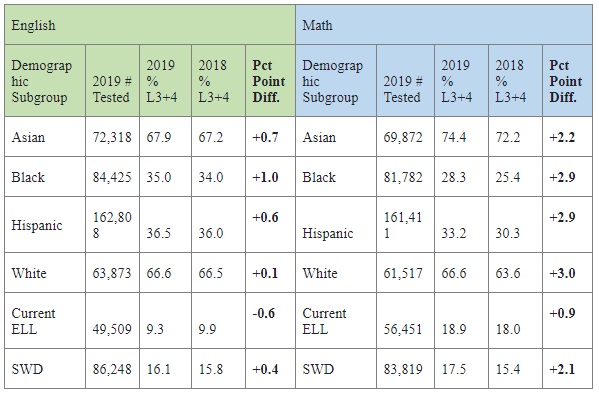 Today’s results demonstrate the City’s progress on the Mayor and Chancellor’s Equity and Excellence for All agenda. Together, the Equity and Excellence for All initiatives are building a pathway to success in college and careers for all students. Our schools are starting earlier – free, full-day, high-quality education for three-year-olds and four-year-olds through 3-K for All and Pre-K for All. They are strengthening foundational skills and instruction earlier – Universal Literacy so that every student is reading on grade level by the end of 2nd grade; and Algebra for All to improve elementary- and middle-school math instruction and ensure that all 8th graders have access to algebra. They are offering students more challenging, hands-on, college and career-aligned coursework – Computer Science for All brings 21st-century computer science instruction to every school, and AP for All will give all high school students access to at least five Advanced Placement courses. Along the way, they are giving students and families additional support through College Access for All, Single Shepherd, and investment in Community Schools. Efforts to create more diverse and inclusive classrooms, including Equity & Excellence for All: Diversity in New York City Public Schools are central to this pathway.