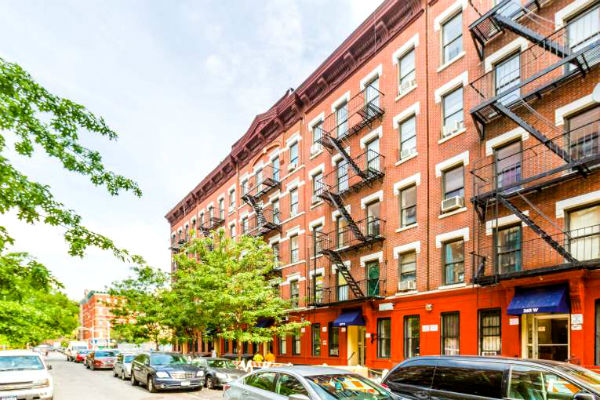 New York City Mayor Eric Adams today announced a settlement that paves the way for the creation of 82 affordable homes for low-income and formerly homeless New Yorkers at 258 West 97th Street on the Upper West Side of Manhattan. The $1.1 million settlement between the city — led by the Mayor’s Office of Special Enforcement (OSE) — and illegal hotel operator Hank Freid and his company ends a decade-long legal battle to protect tenants and housing stock at buildings Freid owned and operated as illegal hotels, including dozens of apartments in this building illegally used for short-term rentals. The lawsuit has generated nearly $2 million in total penalties and stopped the illegal use of more than 300 Manhattan homes in this building and two other illegal hotels.

“Today, we are not only shutting down an illegal hotel operator but also creating 80 new affordable homes for New Yorkers struggling to get by,” said Mayor Adams. “The old approaches to the affordable housing crisis are no longer enough — which is why my administration is pursuing bold, innovative strategies like this one to create housing New Yorkers can actually afford. We need a response with the urgency to match the crisis, and we will explore every opportunity, in every corner of the city, to create the affordable housing New Yorkers need and deserve.”

“The mayor has said, time and time again, that affordable housing is a top priority for this administration, and this work proves it,” said Chief Housing Officer Jessica Katz. “This administration is not going to stand by and let bad actors misuse apartments that New Yorkers need. I want to thank the members of the administration for fighting to preserve these homes and our partners at the Fortune Society for ensuring that they will help some of our most vulnerable neighbors.”

The Fortune Society has acquired the building and is working with the Department of Housing Preservation and Development (HPD) and the Department of Social Services (DSS) to turn it into 100 percent affordable housing, with rent protections, rehabilitation, and social services on site. This effort will create 82 total rent-restricted affordable apartments: 58 homes for formerly homeless New Yorkers, nine homes to be filled through the city’s affordable housing lottery portal, Housing Connect, and 15 units for existing tenants who will receive additional protections from the city to maintain their affordable rents. There will also be one super’s unit.

“The city will use every tool it has to hold accountable illegal operators who turn housing into hotels,” said OSE Executive Director Christian Klossner. “After over a decade of enforcement and litigation, this owner’s illegal hotel empire is closed for business, proving that defying the law and depleting the city’s housing stock is a costly proposition.”

“I am proud of the work the Law Department has done to defeat these baseless lawsuits the operator brought against the city and to support the efforts to shut down this illegal hotel,” said Corporation Counsel Georgia M. Pestana. “Along with our agency partners, we helped pave the way for this deal, which will improve the quality of life for many New Yorkers. We will remain vigilant and take appropriate legal action against any owner who thinks they are above the law.”

“The Office of Special Enforcement and its sister city agencies deserve extraordinary accolades for closing this illegal hotel,” said JoAnne Page, president and CEO, Fortune Society. “As the new building owner and a nonprofit with decades of experience serving people impacted by the justice system and developing award-winning housing, the Fortune Society is deeply gratified and proud to be part of an effort that will lead to the creation of desperately needed safe, affordable permanent housing in a neighborhood of opportunity.”

Under the terms of this settlement, the city will receive a permanent injunction against illegally using or advertising the property for short-term rentals. Additionally, the city will receive $622,550 in penalties for sustained illegal activity and $477,450 to pay for 333 violations issued by OSE inspectors — including $306,450 for 270 illegal occupancy and safety violations and $171,000 for 63 violations issued for illegally advertising the buildings for short-term rentals. The settlement also results in the dismissal of Freid’s lawsuits challenging state law and the city’s enforcement.

Freid’s business entities were the first to receive violations for illegal advertising under a 2016 law. The portions of the lawsuit involving the other two illegal hotels were settled previously. The city obtained $521,500 in settling claims related to 230 West 101st Street, which Freid operated as the Broadway Hotel and Hostel, and $274,000 for claims tied to Freid’s flagship Marrakech Hotel at 2686-2690 Broadway.

“Illegal hotel operations put tenants in harm’s way, creating displacement pressures and degrading their quality of life,” said Ricardo Martínez Campos, acting director, Mayor’s Office to Protect Tenants. “My office applauds the persistent work of the Mayor’s Office of Special Enforcement and its sister agencies to protect existing tenants and ensure the city’s precious housing stock is put to its right and legal use.”

“As New York City recovers from the COVID-19 pandemic, this administration intends to seize this opportunity for change to reimagine how we can more effectively use our existing supply of residential and commercial buildings to address the city’s housing affordability crisis,” said DSS Commissioner Gary Jenkins. “I thank our partners at OSE for their dedication to bringing this important settlement across the finish line and look forward to continuing the work with HPD to ensure low-income and formerly homeless New Yorkers have access to quality affordable housing.”

“The housing affordability crisis is one of the primary drivers of homelessness in New York City,” said Department of Homeless Services Administrator Joslyn Carter. “Today’s announcement underscores this administration’s commitment to developing new and innovative tools we can utilize to connect New Yorkers experiencing homelessness to permanent, affordable housing and help them return to independent living.”

“Today’s announcement highlights this administration’s ‘Get Stuff Done’ approach to supporting New Yorkers in need,” said Human Resources Administration Administrator Lisa Fitzpatrick. “DSS-HRA is proud to have helped our qualified provider partner acquire this building as we work together with them and our agency colleagues to create new affordable housing for New Yorkers experiencing housing instability and homelessness.”

“Thanks to our partners at OSE for working to protect permanent housing for neighborhood residents by holding this illegal hotel operator accountable,” said HPD Commissioner Adolfo Carrión, Jr.

“Thanks to our partners at OSE for working to protect permanent housing for neighborhood residents by holding this illegal hotel operator accountable,” said HPD Commissioner Adolfo Carrión, Jr. “We look forward to working with DSS to ensure that this single-room-occupancy building that was illegally rented for profit is turned into 100 percent deeply affordable housing for low-income and formerly homeless New Yorkers. Thank you to the Fortune Society for stepping up as owner and operator of this sorely needed housing.”

“Every illegal short-term rental in our city represents a unit of housing that is not available for real New Yorkers to live in. In the middle of an ongoing affordable housing crisis, almost one hundred units of housing stolen from New Yorkers by Hank Freid constitutes a serious crime against the people of this city,” said New York State Senator Liz Krueger. “I thank the Mayor’s Office of Special Enforcement for their ongoing efforts to rein in these illegal practices and keep New York’s housing available for New Yorkers.”

“Illegal hotels like the ones at 258 West 97 have negatively impacted the city,”

“Illegal hotels like the ones at 258 West 97 have negatively impacted the city,” said New York State Senator Robert Jackson. “In addition to intensifying the housing crisis across our city, it also contributes to reducing affordable housing opportunities, and this is not right. They pose a grave danger to their occupants, who are often forced to live in unsafe conditions. This settlement and steep penalties should put any property owners who fail to obey the law on notice. This case is a good example of how the city can work to protect New Yorkers and visitors from the dangers of illegal hotels while producing permanent housing.”

“The settlement struck by Mayor Adams’ Office of Special Enforcement will help the city meet the critical need for affordable housing and serve as a powerful deterrent to building owners seeking to profiteer off residential apartments by illegally renting them out as hotel rooms,” said New York State Assemblymember Dick Gottfried.

“Affordable housing is under attack in the city, and we can’t allow bad actors to make a profit while depriving New Yorkers of quality housing,” said New York State Assemblymember Danny O’Donnell. “I’m glad that Mr. Freid has been held accountable for converting his buildings into illegal hotels. Thank you to the Office of Special Enforcement for finally closing this case and committing to creating affordable units for low-income and formerly homeless New Yorkers. I look forward to working with my colleagues in government to make the city more livable as we move forward post-pandemic.”

“Illegal hotel operators exacerbate the city’s ongoing housing crisis by removing residential units from the market and instead renting them short-term to turn a profit,” said New York City Councilmember Pierina Sanchez, chair, Committee on Housing and Buildings. “I commend the City of New York for its successful case against this operator and for using the opportunity to establish affordable housing. As leaders, it is incumbent upon us to protect New York City’s housing stock and to promote more permanent affordable housing for the lowest-income New Yorkers.”

“I congratulate the team at the Office of Special Enforcement on the actions taken against the illegal short-term rental scam at 258 West 97th Street perpetrated by Hank Freid,” said New York City Councilmember Gale Brewer. “Not only will short-term rentals stop, and Freid will leave management of the property, but the city will receive over $1 million in fines and penalties, and a nonprofit will take over the property and transform it into 100 percent rent stabilized housing for low-income and formerly homeless New Yorkers in one of the most expensive neighborhoods in the city. What’s more, the existing rent-stabilized tenants will remain. In the middle of an affordable housing crisis, this is a phenomenal outcome.”

“Hank Freid’s illegal operation exacerbated this city’s already extreme affordable housing crisis,” said New York City Councilmember Shaun Abreu. “Tenants and community members had long complained about the ‘hotel’ at 97th Street. I want to thank the Mayor’s Office of Special Enforcement for putting an end to this scheme and for introducing in its place 82 new units of affordable housing to serve low-income and formerly unhoused New Yorkers.”

“Short-term rentals disturb the quality of life of permanent tenants of those buildings and have a negative impact on the city’s housing stock — limiting affordable housing options for New Yorkers who need them,” said Matthew Longobardi, senior staff attorney, Mobilization for Justice. “We are glad that these transient rentals will no longer occur at 258 West 97th Street and are optimistic that this single-room-occupancy building will be preserved as permanent affordable housing for its current tenants and future ones.”

“The Goddard Riverside Law Project applauds Mayor Adams’ Office of Special Enforcement on its recent settlement with Hank Freid. Now, the building will be used as it was meant to be — as affordable, permanent housing for New Yorkers,” said Kseniya Schemo, project director, Goddard Riverside Law Project. “Our office believes this settlement sends a strong message to unscrupulous landlords: Illegal hotels are not welcome in New York City.”

“This settlement should send a strong message to those developers and companies that flagrantly violate the law on short-term rentals,” said Leslie Thrope, executive director, Housing Conservation Coordinators. “You will pay for your bad acts! It is also encouraging that the building will be purchased and converted to house low-income and formerly homeless tenants, as well retain the current tenants in rent-stabilized permanently affordable apartments.”