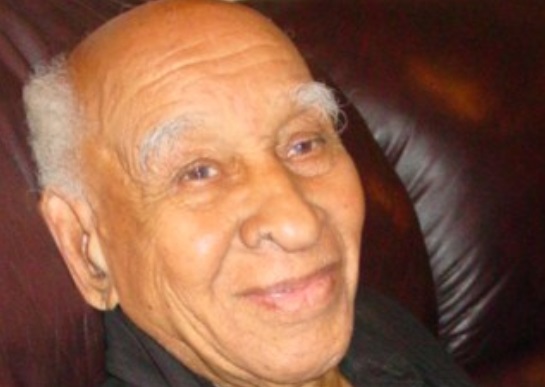 Mr. Max Lucas, the Saxophonist, is a Jazz legend and American treasure. He has worked with the greats of Jazz, the Louis Armstrong Orchestra, Ella Fitzgerald, Billie Holiday, Nat King Cole, Dinah Washington and Sarah Vaughn to name a few. Mr. Lucas celebrates his 99th birthday on Friday, September 18th and Saturday, September 19th , at the Lenox Lounge, 288 Lenox Avenue/Malcolm x Blvd in Harlem, NYC. The evening will be extra special; Mr. Lucas will perform will The Nathan Lucas Trio lead by his talented son. The sets will run from 8 to 11 pm, and there is no charge for admission. So come out and celebrate the life and music of Max Lucas a Jazz legend and icon of Jazz! His life of playing, creating and making music, is Jazz!

Just recently, I had the honor and extraordinary pleasure to meet Mr. Max Lucas when I attended the party of friends. I was asked to sing by the very talented singer and cellist Melvin Greenwich. Melvin was accompanied by a trio of musicians which included Mr. Max Lucas. Melvin introduced Mr. Lucas and spoke of his illustrious and legendary accomplishments and added he would celebrate his 99th birthday, on September 13th. We were in total amazement. There he sat and created, this icon and architect of Jazz. On this hot summer night, Max Lucas was doing what he loved and has done for 85 years, playing the saxophone.

As I sat there thinking about what I would sing, I thought about this summer of 2009 and how it would be remembered for the rain. But on this August night there was no rain, it was hot and a beautiful summer night. I was feeling, “Summertime and the living is easy”. So I sang this great tune for the guest. They were with me and I felt like I was flying. It was an honor to sing with this great man of Jazz and experience his artistry. When he played his solo improvisation, on the beautiful George Gershwin melody I was truly caught up. Then we took a swing-ride as we moved to the Jazz climatic close, “One of these mornings you’re going to raise up singing, then you’ll spread your wings and take to the sky. But until that morning there’s nothing can harm you because Daddy and Mommy are standing by.” Yes, I felt free and supported, because Mr. Max Lucas was playing and standing by. Just as I know he had when he played for those legends of Jazz.

I called Mr. Lucas to ask him if I could interview him for his 99th birthday celebration. Mrs. Etta Lucas, his lovely wife answer the phone and made the arrangement. I arrived at their beautiful home in the Bronx. Mr. Lucas was seated on a plush leather sofa in the family room surrounded by pictures of family, friends and those he had work with. He greeted me with his warm and kind fatherly spirit. He invited me to be seated next to him and we began the interview and spoke at lengthen about his life, his music, and those with who he worked with.

Max Lucas was born September 13th, 1910 in Amherst, Nova Scotia Canada. His father’s name is Osburn Nathan Lucas born in Lucasville, Nova Scotia, Canada. and his mother’s name is Lena Halfkenny Lucas. His grandparents on his father’s side were slaves in Virginia. I can only imagine they escaped from slavery to freedom in Canada or were freed slaves and travel to Canada.

Music ran in Max’s family, his father, a railroad worker played the tube and mandolin and his mother a beautician was a singer. His Mother left Amherst and moved to Washington, DC in 1919 where she had family and would look for work. It was during this period that his father passed away. Max was a young boy. The families move to Washington, DC. prove to be a good one. His mother was successful in her craft as a beautician and wig maker. She was one of the first black women beauticians to work in a white beauty salon. One of her noted clients was the first lady of the United States, Mrs. Woodrow Wilson.

It was in Washington, DC at the age of 14 that Max started playing the Saxophone. It was his friends the White Brothers and their successful band that introduced him to the saxophone and inspired him to play with a band. By the age of 14 ½ he was playing with the Hue Kirksey Orchestra making a dollar and fifty cent a job.

It was in 1926, Max and his mother moved to New York City and lived in Harlem on 131st Street. He had jobs as an errand boy. It was at the Saltus Barber Shop located on Lenox and 133rd Street that played a part in Max getting his first jobs in New York City playing with bands and musicians.

As I continued to ask questions and listen to Mr. Lucas talk about his fascinating life, he turned and asks me a question. “Have you ever heard of Parlor Socials?” I hesitated and then answered, “are they, parlor performances and concerts.” He said yes, I was happy I got that right. He went on explaining to me he played in Parlor Socials, which are performances in someones home in the parlor or what we might consider the living room. People paid money to hear the performances. He earned twenty-five cent for those jobs.

The conversation shifted, we were now in the zone of the giants and the greats of Jazz and American Music. We began to talk about how his work, career and playing the tenor, alto and baritone saxophone with the greats of Jazz and R&B and the unsung players. I felt transformed as Max talked about the days, the gigs, the music, and the experiences of his life. Max Lucas played with many orchestras, bands and singers. He worked with Louis Armstrong Orchestra from 1939-40, they opened the tour at the Lowe’s State Theater. Also, he worked with Buddy Johnson, Doc Wheeler Sun Royal Orchestra, Fess Williams Savoy Band, Mercer Ellington, Alex Coltrane, Sil Austin, Tiny Bradshaw, Joe Madlin, Roy Hamilton, Cootie Williams, Hot Lip Spades, Elmo Holt and the Platters to name a few. One of the many details, he told me that Thelonious Monk worked as a piano player in his own band, Wow!

I could go on to tell of Max Lucas USO tour of Japan and the Philippines after World War II with Tiny Bradshaw, or his playing on The Arthur Godfrey Radio Show or his television appearance on The Jerry Lewis Telethon or his first time working with Billie Holiday at in Utica, New York or of his friendship with Red Fox. But I will end the conversation and interview I had with Mr. Lucas for now. Max Lucas life and accomplishments are legend.

I ask his son, Nathan Lucas who is a Jazz organist, “how did your father’s music influenced you? He said, “I got the authentic music, the chance to meet Dizzy Gillespie, Etta Jones and Michael Howe and so many of the greats.” He added, “I know it is more than playing scales…” and “I know that no one is bigger than music, music is first”.

In a final question for Mr Lucas, I asked, what is your secret? With out missing a beat he said, “live”. Then he added, “I never smoked or drank” “I enjoy playing music, it makes you happy and others happy.”

Mr. Max Lucas is a Jazz Legend and American treasure and at 99 years old he is still playing his Saxaphone and making people happy. I hope to see you at the Lenox Lounge, on Friday, September 18th or Saturday, September 19th to hear, The Man and his music. At 99 years old, it is a performance of a life time.