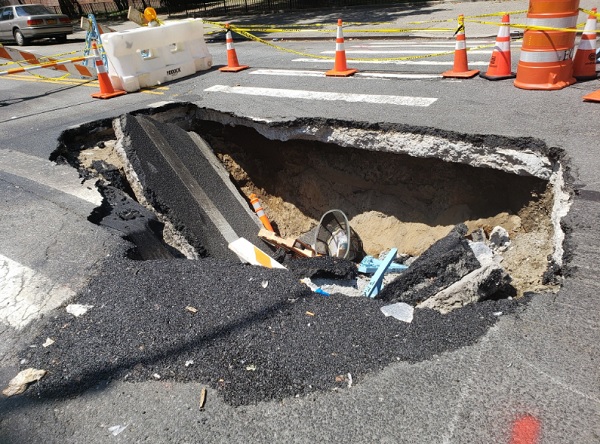 Patch reports that a massive sinkhole that could swallow a car whole has opened up on an Upper West Side street, and area residents are frustrated by the lack of urgency in fixing the problem.

The sinkhole appeared Tuesday on West 101st Street and Manhattan Avenue, City Councilman Mark Levine said. The area is coned off and traffic is being directed around the hole, but the crevice hasn’t been filled yet, Levine said.

Residents in building near the gaping hole voiced their frustrations to Pix 11 News.

“If it was Fifth Avenue or Park Avenue this matter would’ve been settled already,” neighborhood resident Rene Rodriguez told the news station.

Rodriguez told the news station that the sinkhole has caused problems on the street since 2013, and that each time it opens up the city just fills it with asphalt. A neighborhood mother told Pix 11 that the sinkhole is a danger for the area’s children, who approach the unstable street out of curiosity.

Levine said Thursday that Con Edison is dispatching a repair team to fill in the sinkhole.

“Crazy that it’s still not fixed after two days. but we believe [con ed] is now finally on way to repair it,” Levine said on Twitter.