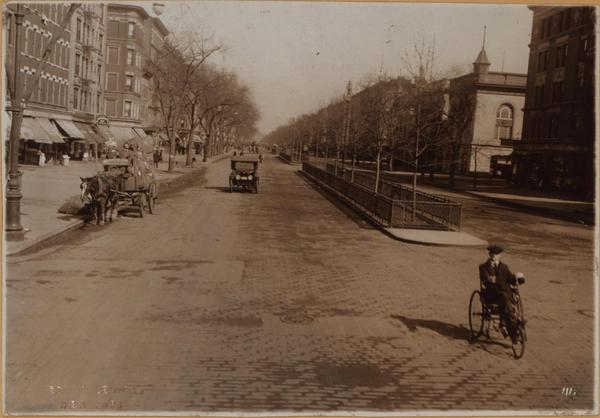 The photographer is standing in the middle of the intersection (a bit elevated) at 130th Street, and 7th Avenue’s cobblestone street taking the photograph.

As a gentleman peddles towards him on a tri-cycle looking directly at him on the right, further back a horse and carriage awaits the owner on the left side of the frame.

Ironically, even further back a horseless carriage rambles up the large one-lane 7th Avenue at the turn of the century (Traffic lights will not be on the streets for another 20 years).

Less than a decade later, in 1916 James Van der Zee and his second wife, Gaynella Greenlee, launch the Guarantee Photo Studio in Harlem.

He eventually renamed the workplace GGG Studio on Lenox Avenue, between 120th and 122nd Streets.