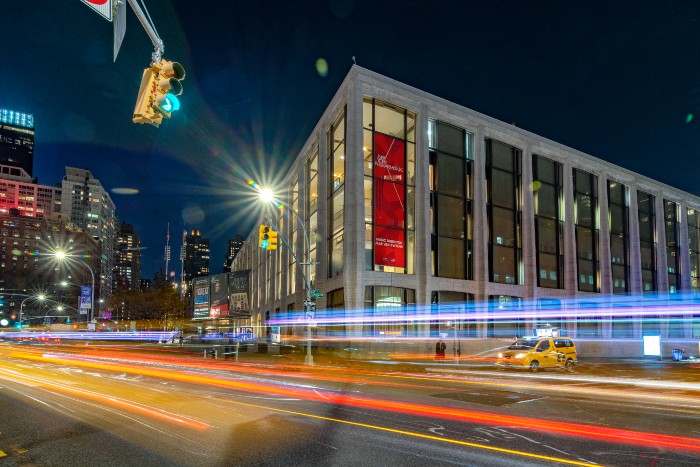 In advance of the reopening of the new David Geffen Hall, Lincoln Center for the Performing Arts (LCPA) has collaborated with The Studio Museum in Harlem and Public Art Fund.

Bringing the most exciting contemporary visual artists working today to David Geffen Hall, these artworks are the first in what will be a new, rotating series of public commissions for Hall’s public spaces.

Featuring a new generation of artists, the series will serve as a beacon of David Geffen Hall and Lincoln Center’s renewed focus on welcome and inclusion.

Abney’s work will enliven the building’s nearly 200-foot north façade along 65th Street, transforming a long, previously uninviting stretch of the building into a dynamic outdoor installation for the first time, ensuring that that outside of Hall’s four walls interacts with the institution in a new and surprising way, just by walking by.

Satterwhite’s work will activate the lobby’s marquee feature, a 50-foot media wall created to provide New Yorkers and visitors the opportunity to engage for free with performances inside the Hall as they happen, as well as captivating works of art, year-round.

These two works, and the broader artistic initiative, will contribute to a sense of welcome both indoors and out, beckoning those who may never have interacted with Lincoln Center or the New York Philharmonic to see the institutions in a new way.

“We are delighted to collaborate with the Studio Museum and Public Art Fund to give these brilliant artistic voices a place of honor at Lincoln Center,” said Katherine Farley, Chair of Lincoln Center for the Performing Arts.

“We could not be more honored to have such important artists working with us to open up this new space. Their imprint on this building and this project will strengthen our work and offer such meaningful experiences for all those both here in the community and far beyond,” said Henry Timms, President & CEO of Lincoln Center for the Performing Arts.

“A guiding principle of the new David Geffen Hall is to open our campus to our community — through the structure of the building and by how we present the art we curate. The very public unveiling of these two dynamic pieces will announce to New York City and the world that we are back, and that we welcome all artists and all art lovers,” said Deborah Borda, Linda and Mitch Hart President and CEO of the New York Philharmonic.

Nina Chanel Abney’s installation for the 65th Street façade will celebrate the rich cultural heritage of San Juan Hill and offer insight into the complex history of the area and its culture.

It will uplift the voices of the people who lived here, worked here, and created here, as well as those who still live here now.

Applying her signature bright colors and graphic, stylized imagery to the surfaces of seven of the bay windows along the north facade, Abney will create a new iconography featuring portraits of notable San Juan Hill residents, scenes drawn from the daily life of that community.

Recognizing that we cannot move toward the future without knowledge of the past, the piece will inspire dialogue around gentrification and San Juan Hill’s extensive history.

Satterwhite will create a poetic new video for the media wall that blends digital technology with archival material, showcasing more than one hundred music and dance students from local schools including Alvin Ailey, The Juilliard School, and Professional Performing School of Arts.

Collectively, they represent the future audiences and performers of Lincoln Center and reflect the diversity of New York City.

Filmed against a greenscreen and composited into a highly-detailed fantastical landscape, the students appear to dance and play their instruments amidst a series of experimental animations and archival videos from Lincoln Center’s history.

This merging of eras recognizes a complex past as it serves to envision a more open and inclusive future for classical music, as well as the future of Lincoln Center, from an intimate perspective—not Lincoln Center from a distance, but close up.

Thelma Golden, Director and Chief Curator of The Studio Museum in Harlem, said, “The reimagination of David Geffen Hall ranks among the most highly visible and important cultural building projects in New York, and demands a visual art presence equal in spirit and power to the music of the New York Philharmonic itself. I’m so thrilled that this crucial program is being inaugurated with works by Nina Chanel Abney and Jacolby Satterwhite, artists whose unbounded imaginations and profound thoughtfulness will speak to, and move, everyone who comes to Lincoln Center.”

“This collaboration with Lincoln Center demonstrates the essential role of public art in opening doors, changing perceptions, championing creativity, and engaging new audiences,” said Nicholas Baume, Artistic & Executive Director of Public Art Fund. “Nina Chanel Abney and Jacolby Satterwhite are both remarkable innovators, reinventing the visual languages of our time. They are visionaries of history, excavating erased or forgotten narratives in order to create new images and experiences. Acknowledging the past and embracing the future, their works promise to give all of us a richer, deeper sense of our culture, our city, and ourselves.”

Opening two years ahead of schedule and on budget, the new David Geffen Hall will deliver a premier home for the New York Philharmonic on the Lincoln Center campus, a more engaged and inviting connection to the wider community, and a musical program that reaches beyond the Orchestra’s traditional audience to introduce the new spaces.

The project is improving the entire concert-going experience, creating a state-of-the-art theater, designed by Diamond Schmitt Architects, to serve as the home of the New York Philharmonic and accommodate anticipated artists and audiences of the future.

At the same time, it is working with Tod Williams Billie Tsien Architects to reorganize and revitalize tens of thousands of square feet into new public space for diverse cultural uses, including performance and community—many of them free to the public.

It is achieving all this while respecting the iconic exterior.

The revitalization of David Geffen Hall, with its added promise of creating jobs and driving the economy as New York City recovers from the economic and social impact of COVID-19, is crucial.

The New York Philharmonic and Lincoln Center were determined to keep the building process moving throughout the pandemic to create jobs and enhance the cultural life of New York City.

Now, opening this October, the New York Philharmonic and Lincoln Center are delivering on their promise: The project will support $600 million in economic activity and 6,000 jobs for New Yorkers.

The project team has exceeded its inclusion benchmarks, with 42 percent construction participation by minority- and women-owned businesses, and averaging 52 percent of the workforce from underrepresented communities.

David Geffen Hall will create a superb concert hall and home for the New York Philharmonic, as well as a versatile space for 21st Century presentations and exciting community activities.

The budget for the construction of David Geffen Hall is $550 million. Turner Construction Company is serving as construction manager, Fisher Dachs Associates led the theater’s planning and design, and Akustiks is the acoustical engineer, and the firms Kohler Ronan and Thornton Tomasetti are providing engineering services.

More details on the renovation can be found at www.davidgeffenhall.info.

Public Art Fund is a non-profit organization that has presented dynamic exhibitions by the world’s most compelling and significant artists in New York City and beyond for more than 40 years.

These projects set the standard for excellence in the field, giving urban space new meaning, while engaging diverse audiences and making culture accessible to all.

Amplifying the impact of partners’ own initiatives, Public Art Fund commissions permanent installations and temporary exhibitions in line with the unique vision of its partners and the specific parameters of each site, resulting in new artworks that activate public spaces and create engaged constituencies through the power of public art.

The Studio Museum in Harlem

Founded in 1968 by a diverse group of artists, community activists, and philanthropists, The Studio Museum in Harlem is internationally known for its catalytic role in promoting the work of artists of African descent.

The Studio Museum is preparing to construct a new home, designed by Adjaye Associates in collaboration with Cooper Robertson, at its longtime location on Manhattan’s West 125th Street.

The building—the first created expressly for the institution’s program—will enable the Studio Museum to better serve a growing and diverse audience, provide additional educational opportunities for people of all ages, expand its program of world-renowned exhibitions, effectively display its singular collection, and strengthen its trailblazing Artist-in-Residence program.

While currently closed for construction, the Studio Museum is working to deepen its roots in its neighborhood through a dynamic set of collaborative initiatives.

The Museum’s groundbreaking exhibitions, thought-provoking conversations, and engaging artmaking workshops continue at a variety of partner and satellite locations in Harlem and beyond.