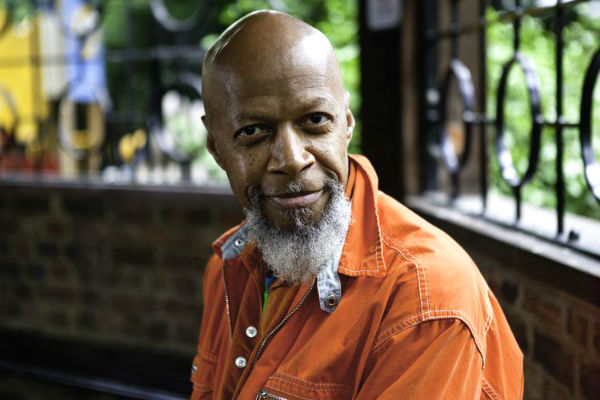 Laraaji was born in 1943 is an American multi-instrumentalist specializing in piano, zither, and mbira.

Born Edward Larry Gordon in Philadelphia, he studied violin, piano, trombone, and voice in his early years in New Jersey. He attended Howard University, in Washington D.C., where he studied composition and piano. After studying at Howard, he spent time in New York City pursuing a career as a stand-up comedian and actor.

In the early 1970s, he began to study Eastern mysticism and believed he’d found a new path for his music and his life. It was also at this time he bought his first zither from a local pawn shop. Converting it to an electronic instrument, he began to experiment using the instrument like a piano.

By 1978, he developed enough skill to begin busking in the parks and on the sidewalks of New York. He favored the northeast corner of Washington Square Park, where he would improvise for hours on end with his eyes closed.

The following year he was “discovered” by Brian Eno while playing in Washington Square Park. The result was his most widely recognized release, Ambient 3: Day of Radiance, the third installment of Brian Eno’s Ambient series. This was his first album released under the name of Laraaji.

This international exposure led to requests for longer versions of his compositions which he supplied to meditation groups on cassette tapes. It also resulted in an expansion of his mystic studies with such gurus as Swami Satchidananda and Shri Brahmananda Sarasvati, founder of the Ananda Ashram in Monroe, New York.

Laraaji’s also started the Laughter Meditation Workshops which he still presents around the globe from his home in Harlem, NY.

Since his love of Orange (see cover photo) has been with him since the beginning, editorials have sometimes led with that unique insight. Vogue said his Harlem apartment is filled with orange garments on hooks, orange tapestries line the walls of the room where he experiments with his wide collection of instruments, and a quick Google search verifies his longtime habit of donning the surprising shade.

In Creative Independent he talked about his favorite thing is to download these recordings and then listen to them while walking around New York, down Riverside Drive or in Central Park, just listening on headphones. That’s the best way to test out my own response to what I’m hearing. Sometimes I’ll listen back to the recordings in a friend’s car. Cars are wonderful places to play things back.