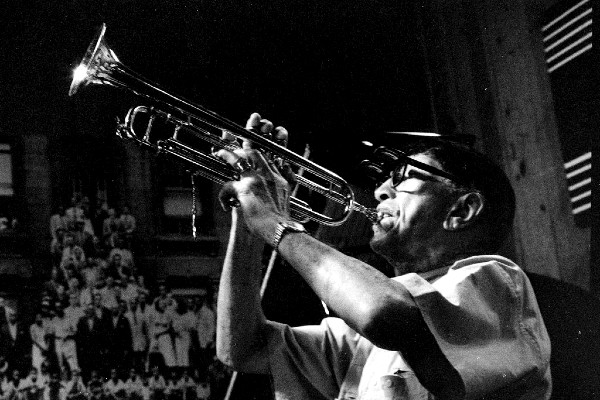 He is also the Grandfather of musician Theo Croker.

Doc Cheatham was born in Nashville, Tennessee of African, Cherokee, and Choctaw heritage.

He noted there was no jazz music there in his youth; like many in the United States, he was introduced to the style by early recordings and touring groups at the end of the 1910s.

He abandoned his family’s plans for him to be a pharmacist (although retaining the medically inspired nickname “Doc”) to play music, initially playing soprano and tenor saxophone in addition to trumpet in Nashville’s African American Vaudeville theater.

His early jazz influences included Henry Busse and Johnny Dunn, but when he moved to Chicago in 1924 he heard King Oliver.

Oliver’s playing was a revelation to Cheatham. Cheatham followed the jazz King around. Oliver gave young Cheatham a mute which Cheatham treasured and performed with for the rest of his career.

A further revelation came the following year when Louis Armstrong returned to Chicago. Armstrong would be a lifelong influence on Cheatham, describing him as “an ordinary-extraordinary man.”

Working with the name brands

Cheatham played in Albert Wynn’s band (and occasionally substituted for Armstrong at the Vendome Theater), and recorded on sax with Ma Rainey before moving to Philadelphia in 1927, where he worked with the bands of Bobby Lee and Wilbur de Paris before moving to New York City the following year.

After a short stint with Chick Webb, he left to tour Europe with Sam Wooding’s band.

Cheatham returned to the United States in 1930 and played with Marion Handy and McKinney’s Cotton Pickers before landing a job with Cab Calloway. Cheatham was Calloway’s lead trumpeter from 1932 through 1939.

According to a personal discussion with Doc Cheatham, he studied with Max Schlossberg for 6 months in 1931. “I approached the topic, at Sweet Basil’s, because his tone was like Schlossberg’s; I had heard Schlossberg, my grand uncle, play once, at home, in 1936.” [Norman M. Canter, M.D.]

He performed with Benny Carter, Teddy Wilson, Fletcher Henderson, and Claude Hopkins in the 1940s; after World War II he started working regularly with Latin bands in New York City, including the bands of Perez Prado, Marcelino Guerra, Ricardo Ray (on whose catchy, the hook-laden album “Jala, Jala Boogaloo, Volume II”, he played exquisitely (but uncredited), particularly on the track “Mr. Trumpet Man”), Machito, and others.

The first time Cheatham joined Machito’s band, he was fired because he couldn’t cope with clave rhythm.

Cheatham eventually got the hang of it though. In addition to continuing Latin gigs, he played again with Wilbur de Paris and Sammy Price. He led his own band on Broadway for five years starting in 1960, after which he toured with Benny Goodman.

In 1959, the U.S. State Department-funded a trip for bandleader Herbie Mann to visit Africa, after they heard his version of “African Suite”.

In the 1970s, Doc Cheatham made a vigorous self-assessment to improve his playing, including taping himself and critically listening to the recordings, then endeavoring to eliminate all clichés from his playing. The discipline paid off, and Doc received ever-improving critical attention.

His singing career began almost by accident in a Paris recording studio on 2 May 1977. As a level and microphone check at the start of a recording session with Sammy Price’s band, Cheatham sang and scatted his way through a couple of choruses of “What Can I Say Dear After I Say I’m Sorry”.

The miking happened to be good from the start and the tape machine was already rolling, and the track was issued on the LP Doc Cheatham: Good for What Ails You.

His singing was well received and Cheatham continued to sing in addition to play music for the rest of his career.

Cheatham toured widely in addition to his regular Sunday gig leading the band at Sweet Basil in Manhattan’s Greenwich Village in his final decade. During one of his frequent trips to New Orleans, Louisiana, he met and befriended young trumpet virtuoso, Nicholas Payton.

In 1996 the two trumpeters and pianist Butch Thompson recorded a CD for Verve Records, Doc Cheatham and Nicholas Payton.

In 1998, Doc received a Grammy posthumously for Best Jazz Solo for “Stardust” on his CD, Doc Cheatham and Nicholas Payton. His wife Amanda and daughter Alicia accepted the Grammy on his behalf.

Doc Cheatham continued playing until two days before his death from a stroke, eleven days shy of his 92nd birthday.