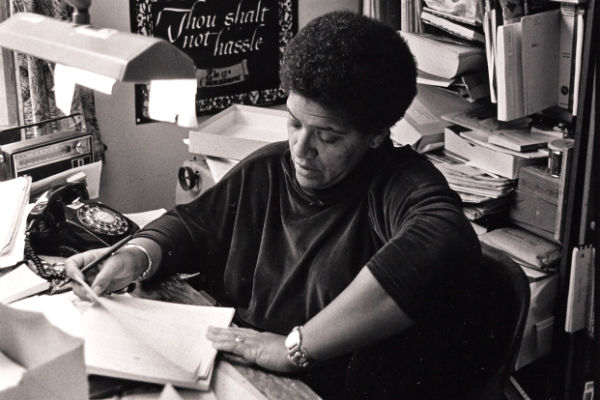 The past year has been dramatically different from those that came before, but the traditions and signature events that have made the Cathedral of St. John the Divine a beloved cultural institution continue, albeit online rather than in-person.

In a twist on one of its long-standing traditions, the Cathedral will celebrate the life and works of Audre Lorde, poet, essayist, feminist, educator, and activist, with a virtual induction ceremony into its American Poets Corner on Thursday, February 18 at 6 pm online via Zoom.

Lorde’s writings are both deeply personal and committed to a liberating political vision. Her poems and essays openly discuss her lesbianism, Blackness, motherhood, cancer diagnoses, and many other facets of her life, exploding notions of both white male dominance and cultural homogeny within progressive social movements.

These many layers of selfhood, expressed through lyrical writings both prose and poetic, celebrate difference, inviting readers to draw upon their own personal journeys to add to the shared fight for justice and community.

At the time of Lorde’s election, in the spring of 2020, for induction into the American Poets Corner, the Cathedral still hoped to be able to invite lovers of great literature into its soaring Gothic interior for an in-person ceremony, customarily held in early November.

Due to the ongoing coronavirus pandemic and the need for heightened safety, however, the delayed tribute will instead be held online on February 18, 2021, the anniversary of Lorde’s birthday.

Even in the context of a digital celebration, important Poets Corner traditions will still be maintained: a memorial stone, carved with Lorde’s dates and a quotation from her poem, “A Litany for Survival,” will be laid in the Cathedral, placing Lorde amongst her fellow American literary giants.

Candidates for induction were nominated by the Electors to the Poets Corner under the guidance of Cathedral Poet in Residence Marie Howe.

The American Poets Corner, established in 1984 to memorialize and celebrate American writers, is modeled after a similar alcove at Westminster Abbey in London.

The American Poets Corner and Cathedral poetry events have become an integral part of the literary landscape of New York.

For more information on this year’s induction, visit stjohndivine.org.

People from many faiths and communities worship together in services held more than 30 times a week; the soup kitchen serves roughly 25,000 meals annually; social service outreach has an increasingly varied roster of programs; the distinguished Cathedral School prepares young students to be future leaders; Advancing the Community of Tomorrow, the

Poets, fiction writers, essayists, and dramatists: the American Poets Corner memorializes the literature of our nation in all its surprise, wit,v and beauty.

The Poets Corner, beloved by visitors, has earned respect for its choices of inductees, and for the high quality of its Electors and Poets in Residence, which include 17 U.S.

Poets Laureate and winners of every literary prize an American writer can aspire to, including the Nobel.

Marie Howe, the current Poet in Residence, joined the Cathedral in 2019, making this her first induction.