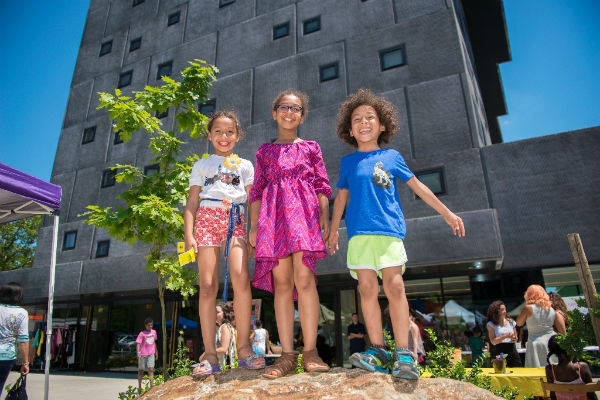 Kelley will step down on July 22nd, 2020, to pursue new opportunities, after six years with the organization. An accomplished visual artist, curator and arts administrator, Kelley helped shaped the curatorial vision of the Sugar Hill Museum and led the organization during a robust period of growth. “We are very grateful for Lauren’s contributions to the evolution of this young Museum. Her keen artistic vision presented some remarkable exhibitions by emerging as well as established artists introducing thousands of children, who might haven’t otherwise had access to the arts, to the various art media, often challenging their notions of what art is and fueling their imaginations,” remarked Neil Bhargava, Chair of the Board of Directors.

Kelley was instrumental in the Museum’s launch having joined the inaugural team in 2014 as Associate Director of Curatorial Programs. She was promoted to Director and Chief Curator in 2017. Stepping up at a critical phase in its development, Kelley’s vision laid the foundation for the Museum’s distinct curatorial identity executing sophisticated contemporary art exhibitions for young children. Working in partnership with both local and renowned artists like Faith Ringgold and the estate of Ana Mendieta, the Museum garnered national attention rapidly. Under her leadership, signature programs like the Artist-in-Residence program were defined hosting artists such as Derek Fordjour, Leslie Jimenez, Damien Davis, David Shrobe, and more recently Lina Puerta. Kelley also directed the launch of community programs such as Nights at Sugar Hill and Sugar Hill Mornings, and produced the Museum’s first annual fundraiser. The robust nature of the Museum’s program during this time also allowed for growing a roster of patrons including the National Endowment for the Arts, among others. As the Museum approaches its fifth year in operation, Kelley departs having primed the organization for a successful road ahead.

Kelley, who was previously the founding director of the gallery at the Prairie View A&M University in Texas, is also a practicing artist who has exhibited at the Sikkema Jenkins & Co. and the New Museum in New York. She has held residencies at the Studio Museum in Harlem and the Museum of Fine Arts in Houston, and received a Creative Capital award in 2015.

Kelley expressed that “the Sugar Hill Children’s Museum is a cultural hub like no other. Building this institution has been a true labor of love. I move forward eager to see this important initiative continue to thrive.”

The Sugar Hill Children’s Museum of Art and Storytelling strives to strengthen community by providing our culturally rich neighborhood with a space where children and their families grow and learn about Sugar Hill, and about the world at large, through intergenerational dialogue with artists, art and storytelling. SHCMAS is the cultural capstone of the Sugar Hill Project, a multi-use building developed by Broadway Housing Communities (BHC) which includes permanent affordable housing for individuals and families, and the Sugar Hill Museum Preschool. Since 1997, BHC has integrated arts and education into their innovative housing projects.