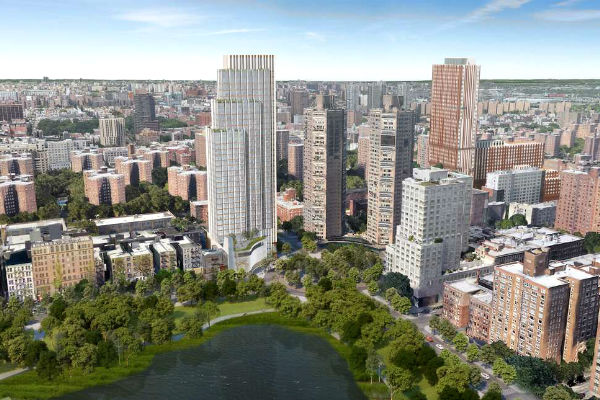 Council makes modifications to include only MIH Option One and a partnership with JOENYC to fund repairs and renovations for existing affordable units in La Hermosa’s district. On December 3, 2019, the City Council Land Use Committee voted to approve a land use application that will facilitate the construction of a new 30-story mixed-use residential and community facility building. The new building will replace the existing three-story La Hermosa Church building at 5 West 110th Street in Harlem, Manhattan. The vote was immediately after the Zoning and Franchises Subcommittee vote, where Council Members voted to approve the application with modifications.

The proposed development is a 30-story tower-on-a-base building which will rise to a height of 339 feet. The building will include church space, a music hall, music school, and residential units. There will be a total of 180 residential units, with 50 of the units set aside for affordable housing. For CityLand’s prior coverage on this application, click here.

On November 4, 2019, the City Council Subcommittee on Zoning and Franchises held a public hearing on the application. At the hearing, some Council Members raised questions and concerns about the project.

Subcommittee Chair and Council Member Francisco Moya asked why the applicant is pursuing a large expansion when the Church has under 100 congregants and only uses 8,000 square feet of the existing building. The applicant explained that the deteriorating infrastructure has made parts of the building unusable and has forced the Church to use less of the building space. She also stated that La Hermosa used to have community space and explained that the expansion would allow the Church to be able to provide more services to the community.

Council Member Inez Barron was concerned that the project still lacked a developer and felt that it was premature for the applicants to bring up a land-use application without one. She suggested that the applicants use Ebenezer Plaza as an example of how the church could still meet their objectives for redevelopment while working with a developer. The Ebenezer Plaza project is a development in Council Member Barron’s district which involved a church that wanted to renovate and expand their church to provide more community programming and wanted residential units to provide the church with funding.

Council Member Antonio Reynoso had concerns about the affordability of the residential units. He noted that 50 affordable units out of a total of 180 units are not enough affordable housing produced and using Mandatory Inclusionary Housing Option One is not affordable for the local Harlem community. Council Member Reynoso stated that the units will likely target households with higher incomes as opposed to households in the local community and would increase the impacts of gentrification and displacement.

The second modification is that the applicant agreed to commit $7 million under an agreement with JOENYC, a community housing development organization, towards repair and renovation work for 340 existing affordable housing units in the district. He noted that this commitment was to address the issue of housing affordability in La Hermosa’s district. According to a Council spokesperson, the $7 million will be from the proceeds of La Hermosa’s ground lease to a developer or from a mortgage on La Hermosa’s property from the National Disciples of Christ Organization.

The Subcommittee voted to approve the application with modifications by a vote of six members. Council Member Perkins commended the La Hermosa and JOENYC partnership and stated that it will meet the needs of his community.

It is anticipated that the Council will vote on the application on December 19, 2019.