Kima Raynor Dyson Is Destined To Sing Her Song (Video) 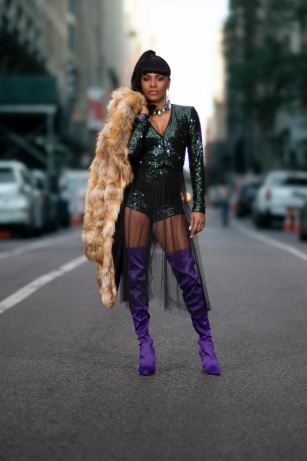 Back in 1994 Total was one of the signature acts of Sean “Diddy” Combs’ Bad Boy Records and the group consisted of Pamela Long, Kima Raynor and Keisha Spivey who were 18, 22 and 23 years old respectively. Over the next six-year period the ladies went platinum plus and sang with R&B, funk, hip-hop, soul and pop royalty such as Lil’ Kim, Foxy Brown, Da Brat, LL Cool J, Mase, Gang Starr, Missy Elliot and the late and great Notorious B.I.G. Their voices were on movie soundtracks for Bait and Soul Food.

Here’s the mega-hit “Cant’ You See” with Diddy and Biggie:

Two of the members, Keisha and Kima got married and started raising families. For 18 years Kima removed herself from the music industry while she raised her family, went to school, became a certified medical coder and started her own consulting company. God blesses us with many gifts and in the back of her mind, Kima always felt like something was haunting her about how she left something undone when it came to her musical career and she silently dreamed about a reunion tour.

In 2014 Pamela and Kima reunited and began performing as a duo under the “Total” name. At the 2014 Soul Train Music Awards the ladies performed “Not Tonight” (Ladies Night) with Lil’ Kim, Da Brat, Missy Elliot and Left Eye (posthumously via video). In 2015 they toured to sold-out shows with R. Kelly on the Funk Fest tour.

In 2016 Keisha rejoined the group for the Nationwide Bad Boy family Reunion tour. One day Kima’s daughter came and said to her, “I heard you were famous Mommy so why did you stop singing?” They say from the mouth of babes flows the truth. What do you do when your gut tells you “it ain’t over and you’re one-third of a successful American girl group named Total?” You listen to the spirit within like Jakima “Kima” Raynor Dyson did and you decide to it’s my time now.

Fast forward to 2018 and Kima is updating her look; she’s a seasoned performer and desired a new look. Lead stylist Terry Artis was brought in as the creative director/ producer and including himself, he assembled a seven-person team: Sharon E. Clarke, Jazzmyn Banks, Evan Seplow, Reggie Sandiford, Daniel Hill, and Amy Bougades. Kima no longer has the look of a girl group singer, she’s a sassy, sophisticated and sizzling hot woman in 2018.

Now with her voice and new look, she’s got to get to doing what she does so well – singing. Her husband Carlos Dyson has stepped in to manage her and he is very supportive in guiding Kima’s career in this phase of her life now that being an independent artist is so customary in today’s industry.

Kima is working on some music as well as making connections with the right music producers and writers to showcase her full range of musical talent. Kima’s new sound is comparable to her previous Total efforts because let’s face it; the 1990’s sound and style is still bankable and getting people out to concerts. I would summarize Kima circa 2018 in the words of McFadden and Whitehead, “Ain’t No Stoppin’ Her Now,” and/or Diana Ross’ hit tune, “I’m Coming Out.”