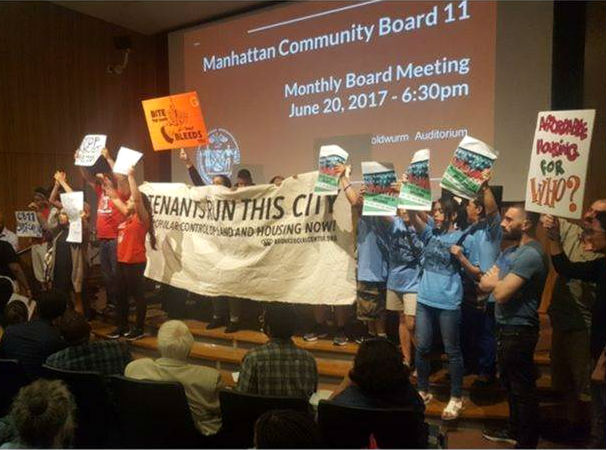 Patch reports that a state judge ruled against a legal challenge to the city’s plan to rezone a large portion of East Harlem in an attempt to spur development in the neighborhood.

State Supreme Court Justice Carmen Victoria St. George ruled July 12 that the city agencies behind the rezoning plan did their due diligence when conducting an environmental impact statement that predicted only 27 East Harlem residents were at risk of indirect displacement as a result of the plan — which will allow developers to build 30-story towers along the neighborhood’s major avenues.

“After careful consideration, this Court finds that respondent [the city] took the requisite hard look when it considered the indirect impact of the project on area residents,” St. George wrote in her decision.

“Respondent’s statement that only 27 residents, in 11 apartments, will be indirectly displaced between now and 2027 has a rational basis.”

St. George’s decision hinged on the beleif that the court’s ruling should not be based on how city agencies should prioritize a plan’s effects on an existing community compared to any benefits it may bring or whether a plan will gentrify an area. The court is only supposed to consider whether city agencies did their due diligence by considering “all relevant areas of environmental concern,” St. George wrote in her decision.

The Legal Aid Society filed its lawsuit against the city in January, accusing city agencies of neglecting the plan’s potential effects on the neighborhood’s rent-regulated tenants. The group argued that the plan will result in the indirect displacement of rent-regulated tenants — which the city never accounted for in its environmental impact statement.

“From Brooklyn now to El Barrio, the City continues to employ a flawed methodology that ignores that realities facing rent-regulated tenants and the consequences of land use decisions on their rents and livelihood,” Jennifer Levy, supervising attorney of the civil law reform unit at The Legal Aid Society, said in a statement when the lawsuit was filed.

The City Council overwhelmingly passed a city proposal to rezone East Harlem during its final legislative session of 2017. The plan had been heavily modified since it was first presented by the Department of City Planning in the fall of 2016, and many of the new changes were presented during the vote by former Council Speaker Melissa Mark-Viverito and City Councilman Bill Perkins.

Neighborhood activist groups called the plan racist for increasing development in a majority minority community. The groups fear that increased development will accelerate gentrification, drive up rents and contribute to the displacement of East Harlem’s current residents.