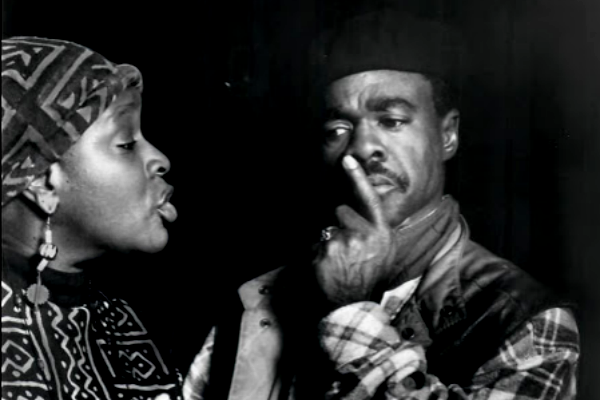 On Fridays from October 2 to 20, 2020, New Federal Theatre (NFT) will present “Octoberfest,” a retrospective readings series in which five rarely-done yet noteworthy plays.

All previously produced by NFT, will be recreated by accomplished actors. These plays raise topics, issues and personal stories that are newly relevant in these times of pandemic and social inequality. The series is dedicated to the late Chadwick Boseman, whose acting career was launched at NFT, who served on NFT’s Board of Directors, and who was a lifelong supporter of NFT.

The readings will be presented each Friday in October on the following schedule. They will be free and accessible from NFT’s website, https://www.newfederaltheatre.com. Donations will be gratefully accepted.

This play dramatizes WPA recordings, collected in the 1930s, of remembrances by former slaves in Virginia. Black elders relate the experience of the “peculiar institution,” recalling what happened to them nearly a lifetime ago, adopting different personalities, and sharing the stories/histories of other slaves. Although they endured horrors, faith sustained them and instilled their desire for survival, always holding the promise that in the future they will be free: ‘On my way to heaven, Lord remember me to do Lord, do Lord, do Lord remember me.’

This two-character play captures a moment of crisis between Mary White Overton and Dr, W.E.B. DuBois, co-founders of the NAACP, friends and activist allies, at the time of increasing violence against the African-American community as World War I unfolds.

After being raped by a white employer at the age of 11, Endesha Ida Mae Holland became a rebel. But when she stumbled across the civil rights movement she found herself developing into a leader. This play uses three actresses to relate the story of Holland’s upbringing in segregated Greenwood, Miss. It is also a story of success against all odds.

A play about survivor guilt. D.J., a Black Congressional Medal of Honor recipient, and his psychiatrist–both Vietnam vets–verbally spar until the doctor draws out the horror and disgust that has traumatized the young man.

A former blues singer living in a decaying church in Detroit never ventures out into the world that rejected him. While playing checkers he and Ivy, one the last members of the congregation, move from animosity to friendship. Both have secrets from the old days: he conceals his struggle of faith and despair and she withholds a searing loss as they rescue each other from emotional numbness and terminal loneliness.

New Federal Theatre’s Mission is to integrate artists of color and women into the mainstream of American theatre by training artists for the profession, and by presenting plays by writers of color and women to integrated, multicultural audiences – plays which evoke the truth through beautiful and artistic re-creations of ourselves. More info: https://www.newfederaltheatre.com/about1

In May 2020 the Off-Broadway Alliance named Woodie King, Jr., Founding Director of New Federal Theatre, a “Legend of Off-Broadway,” recognizing his sustained achievement in Off-Broadway theater.