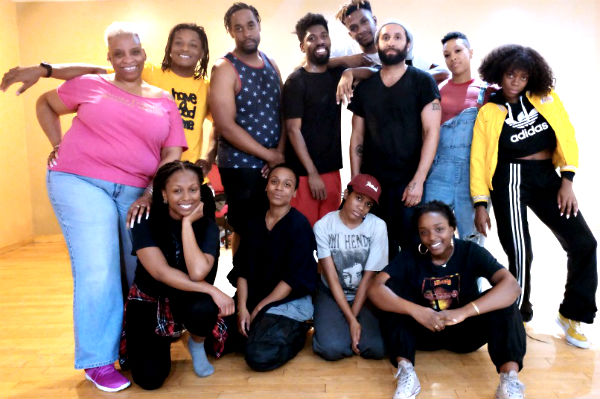 Dr. Barbara Ann Teer’s National Black Theatre (NBT) closes out its golden anniversary season with the world premiere of 125th & FREEdom, a five-hour public performance dance project by Ebony Noelle Golden this June. Written, choreographed and directed by Golden, the piece will make Harlem’s iconic 125th Street its stage as it explores the question: “If Harriet Tubman were alive today, how would she free Black people?” The event is a part of the institution’s new programmatic initiative, NBT Beyond Walls, which sees the esteemed Harlem institution presenting performances throughout the city, country and internationally.

Composed of 16 movements and featuring a New Orleans-style brass band, the choreopoetic performance will take place at 11 sites as pop-up installations across the corridor of 125th Street from the East River to the Hudson River each Saturday in June, beginning on June 8. 125th& FREEdom sees a victorious, but battle-weary tribe of nomads led by Tubman’s descendant on an epic journey to a land of promised liberation. Fusing song and poetry with choreography based on historic and current Black social dances, the piece will be an immersive, participatory cultural experience that is equal parts ritual performance, processional and protest.

“I am full of gratitude to be able to share this work in deep partnership with NBT, Harlem, and the brilliant artists who have joined the journey. I truly believe that we are walking in the legacy that Dr. Teer and so many other artists cultivated for us,” said Golden. “May we continue to remember as we move forward in love, liberation and evolution. May our ancestors, our elders, and our families be lifted up through this community offering. Let’s get free!”

The June premiere of 125th & FREEdom comes as NBT, New York City’s oldest continually run Black-owned theater, celebrates its Founders Month. Born on June 18, 1937, Dr. Barbara Ann Teer was a lion of New York City theater who founded NBT in 1968 and bought its building, which became the first revenue generating, a sustainable Black arts complex in 1983. Now helmed by Sade Lythcott, Dr. Teer’s daughter, and Artistic Director Jonathan McCrory, and in anticipation of its building’s imminent redevelopment, NBT is celebrating its 50th anniversary with a series of productions in spaces outside of the theater, including 125th & FREEdom.

“We are excited to conclude our 50th season with the world premiere of Ebony’s groundbreaking work 125th & FREEdom. We chose to help develop this piece and position it as a punctuation to the half-century of groundbreaking work NBT has done in Harlem,” said Lythcott. “The piece speaks to the spirit of the roots of NBT and uses the same devices (ritual, dance, poetry, music, socio-economic justice) my mother used in the late ’60s and ’70s to awaken the SOUL of our community. With this show, NBT is recommitting to Harlem and to our communities all over the world our steadfast commitment to continue to Keep Soul Alive for the generations to come!”

Performances of 125th & FREEdom run from 1 p.m. to 6 p.m. on Saturdays in June, beginning on June 8, and are free and open to the public. Participants are advised to wear comfortable shoes.

To stay in step with the 125th & FREEdom performances, follow the hashtag #125thandFreedom and visit www.nationalblacktheatre.org, where you can also learn more about NBT 50th anniversary and upcoming events. Follow NBT on Facebook (@NationalBlackTheatre) and Twitter/Instagram (@NatBlackTheatre). For more information on Ebony Noelle Golden visit www.bettysdaughterarts.com or follow her on Twitter at (@Bettysdaughter1) or Instagram (@EbonyNoelleGolden).

Ebony Noelle Golden is an artist, scholar and culture strategist from Houston, now living and working in Harlem. She stages site-specific rituals and live art performances that profoundly explore the complexities of freedom in the time of now. Golden serves as the founding CEO and principal engagement strategist at Betty’s Daughter Arts Collaborative, a NYC-based culture consultancy and arts accelerator, working globally (bettysdaughterarts.com). She lectures on contemporary Black feminist, womanist and experimental theater of the African diaspora at the New School and community-based performance praxis in the graduate Performance and Performance Studies Program at Pratt.

Founded by visionary Dr. Barbara Ann Teer in 1968, National Black Theatre (NBT) is a nationally recognized cultural and educational institution. Dr. Teer pioneered “the healing art of Black theater as an instrument for wholeness in urban communities where entrepreneurial artists of African descent live and work.” In 1983, Dr. Teer expanded the vision of NBT by purchasing a 64,000-square-foot building on 125th Street and Fifth Avenue (renamed “National Black Theatre Way” by local law in 1994). This was the first revenue-generating Black arts complex in the country, an innovative arrangement through which for-profit businesses who shared NBT’s spiritual and aesthetic values rented retail space to subsidize the arts. Out of her vision, NBT houses the largest collection of Nigerian New Sacred Art in the Western hemisphere and is considered the authentic representation of a model whose time has come. NBT is supported by grants from the Ford Foundation, New York Community Trust, Time Warner Corporation. Howard Gilman Foundation, Jerome Foundation, Andrew Mellon Foundation, City Council of New York, City of New York Department of Cultural Affairs, Columbia Service Society and private donations. Visit www.nationalblacktheatre.org .