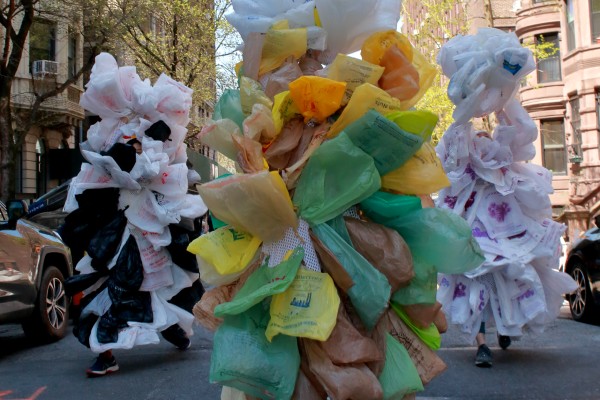 The piece will be presented on the Open Boulevards at Amsterdam Avenue between 109-110th Streets in Harlem, NY. The event takes place on Saturday, September 18th, from noon-6:30pm.

The program is offered as a celebration of Park(ING) Day, an annual global event where people transform spaces normally inhabited by cars into public places for people. This FREE public program features dance and music performances, community planting, poetry, participatory art, Karate and Zumba workshops for all ages, family games, and more.

The afternoon kicks off at noon with Melissa Elstein of “Love Your Street Tree Day” and Peter Arndtsen and Michael Gonzelez of The Columbus-Amsterdam BID leading a tree bed educational walking tour from 106-110 Streets, followed by a planting demonstration. Volunteers can sign up to help beautify and plant along the neglected stretch of the Minerva Bernadino Greenstreet with native flowers.

The dance creates a surreal spectacle while provoking contemplation about the beauty of that—and who—our society throws away. Following, TLD presents excerpts of other works including “Arboreal Entanglement,” exploring the relationship between people and trees, performed by Sperling with music by Burtner and “Bunhead’s Back,” about what it’s like to feel different.

TLD’s performance is bookended by excerpts from “Treaty Between Earth and Self,” an interdisciplinary poetry-music-theater-dance project composed by N. Scott Johnson in development by Rattlestick Theater. This piece is an introspective journey into an Amazonian-inspired world and explores the sounds of Brazilian Forró. (Directed by Danilo Gambini with poetry by Colin Greer, percussion by Victor Caccese, vocals by Alice Reys, and choreography by Sperling.)

At 2 pm, Oleana Whispering Dove, a Tsalagi-Algonquian Native American and Indigenous historian, will offer a Native New York Orientation providing information about the Native history of the festival site. Following, Oleana will read her Dream Catcher poetry about the legend of the Tsalogi Water Spider, an iconic female animal spirit.

jill sigman/thinkdance shares “To Mend” is an iterative durational process of organizing and dancing with ceramics—a meditation on brokenness and how we will put the pieces together anew. In this part-performance part-installation, Jill will carefully and caringly arrange a set of handmade ceramic shards into a structure that can be played like an instrument. There will be building and unbuilding, sounding and silence, movement and stillness, in this reflection on slowness, loss, and repair, both personal and structural.

In parallel throughout the afternoon, artist Capucine Bourcart performs her installation “The Blanket,” in which she continually knits plastic “thank you” bags together, a project begun in 2020.

The program concludes with the local rhythms of Sonny Daze, a Latin jazz trio with performers Salvador Merced, JojoSoul, and Armando Duchesne.

Throughout the day, All Street Journal provides participatory socially conscious muralling for children. Harmony by Karate offers a family workshop (1:30 pm) and Marianel Marquez of BeFitNYC offers a free Zumba class (4 pm). The festival will also have civic and community engagements, including a presentation by Stop-the-Chop an NYC-based grassroots organization advocating for the cessation of non-essential helicopter flights to reduce noise and pollution and promote public health.

Audiences are advised to protect themselves and the community by observing social- distancing and mask-wearing when appropriate.

Jody Sperling is a dancer-choreographer and Founder/Artistic Director of Time Lapse Dance. She has created more than 45 works including many furthering the legacy of performance technology innovator Loie Fuller (1862-1928). Considered the preeminent Fuller stylist, Sperling has expanded the genre into 21st-century, environmentally-focused performance. She has toured nationally and internationally and taught at many colleges and universities. In 2014, Sperling participated in a polar science mission and danced on Arctic sea ice, creating the dancefilm “Ice Floe” (winner of a Creative Climate Award).

She earned a World Choreography Award nomination for her work on the French feature “The Dancer” (premiere Cannes Film Festival). Sperling is developing ecokinetics, a practice cultivating the relationship between the moving body and environmental systems and throughout the pandemic, has been focusing on programming street festivals and producing dance media. Sperling holds a BA in Dance & Italian Studies from Wesleyan University, an MA in Performance Studies from New York University, and an MFA in Dance from Montclair State University.

Time Lapse Dance (TLD), is an all-women 501(c)3 dance company founded by Sperling in 2000. TLD envisions dance as a powerful force that can help move us toward a more embodied, sustainable, and equitable future. The work aims to investigate the relationship of the moving body to the ecologies we inhabit through performance, media, education, and activism.

The Columbus Amsterdam Business Improvement District (BID) was created to increase commercial activity and create a more vital and active business center along with Columbus and Amsterdam Avenues from W. 96 Street to W. 110 Street by providing services and initiating capital improvements to make the neighborhood cleaner, safer, and more prosperous.

Love Your Street Tree Day is a coalition of NYC volunteers, elected officials, community leaders, local businesses, government agencies, neighbors, schools, academia, and non-profits who have joined to bring awareness to the importance and benefits of our NYC street trees, teach best practices for caring for them, removing litter and reducing single-use throwaway items (such as plastic bags and plastic straws), and educating about the health and environmental hazards of dog waste. Originally founded in the West 80s of the Upper West Side of Manhattan, its events now attract urban tree lovers throughout the city.

Jill Sigman is an interdisciplinary artist and agent of change who choreographs with bodies and materials. She founded jill sigman/thinkdance in 1998 to think about pressing social issues through the body, and in 2016, she founded “Body Politic”, a program of workshops and performance laboratories to ask salient political questions somatically. Working with things we throw away such as “garbage” and “weeds”, Sigman helps us to understand the connections between social justice, racial justice, and environmental justice and to envision a world in which we reconnect with the natural world and each other in meaningful and empathic ways.

Sigman was the first Gibney Community Action Artist in Residence; has been in residence at Movement Research, Guapamacátaro Interdisciplinary Residency in Art and Ecology (Mexico), The Rauschenberg Residency, MANCC, and the Tisch Initiative for Creative Research at NYU; and is a Creative Campus Fellow at Wesleyan University. She was born and raised in Brooklyn. In response to the pandemic, jill sigman/thinkdance has been evolving into a fluid vehicle for movement, dialogue, connection, and healing with a constellation of dancers committed to social justice and community care.

Capucine Bourcart immigrated to the United States and has called New York since 2006. She grew up in Alsace (the Germanic region of Eastern France) and identifies as French with a Vietnamese heritage. Bourcart’s mixed-media assemblages and photo collages employ a wide range of techniques, informed by her own multicultural background and the work of artisans explored through extensive travel.

Matthew Burtner (Composer) (www.matthewburtner.com) is an Alaskan-born composer and sound artist who creates music from materials and data of climate change, particularly related to the Arctic. Burtner spent his childhood in the far north of Alaska and this profoundly shaped his musical language. He is a pioneer in the field of eco- acoustics and has worked extensively with systems of climatology applied to music.

His work has recently been featured by NASA, National Geographic, the US State Department, Earther, and the Ringling Museum. First Prize Winner of the Musica Nova International competition and an NEA Art Works and IDEA Award winner, Burtner’s music has received honors and prizes from Bourges (France), Gaudeamus (Netherlands), Darmstadt (Germany), and The Russolo (Italy) international competitions. He teaches composition and computer music at the University of Virginia and directs the environmental arts non-profit organization, EcoSono (www.ecosono.org).

Amsterdam Eco/Arts Festival is made possible in part with public funds from Creative Engagement, supported by the New York State Council on the Arts with the support of Governor Andrew M. Cuomo and the New York State Legislature and administered by LMCC.