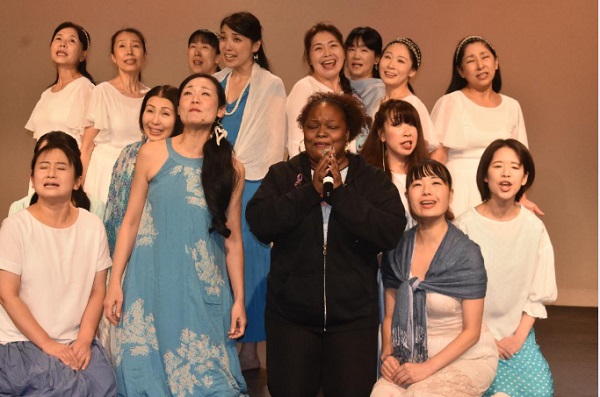 Upcoming events included October 24, 2019, Countee Cullen Library, HARLEM LOCAL VOICES NETWORK KICK OFF CONVERSATION & POETRY JAM, October 25, 2019, Sugar Hill Children’s Museum of Art and Story Telling: THE AMERICAN DREAM, an illuminating evening featuring musical performances by youth-led & Harlem based IMPACT Repertory Theatre followed by a dynamic panel discussion unpacking the intersections of family, theatre & the American Dream with Emmy & Tony award winning actors from the Broadway play “The Great Society” and Pulitzer Prize winner ROBERT SCHENKKAN, and on the 28th of October Harlem Gallery of Science THE ARTIST IN THE MACHINE: The World of AI-Powered Creativity written by Professor Arthur I. Miller is about creativity in the age of machines— our creativity and their creativity.

Photos of the New Heritage Theatre Group presentation of Prayer of Love & Peace, a message of global peace and understanding, by the 35 member Inamori Art Project Group of Japan, featuring Harlem’s Oscar & GRAMMY-nominated IMPACT Repertory Theatre at the International Salvation Army Center in Harlem and the Harlem School of the Arts, October 11- 13th, 2019.