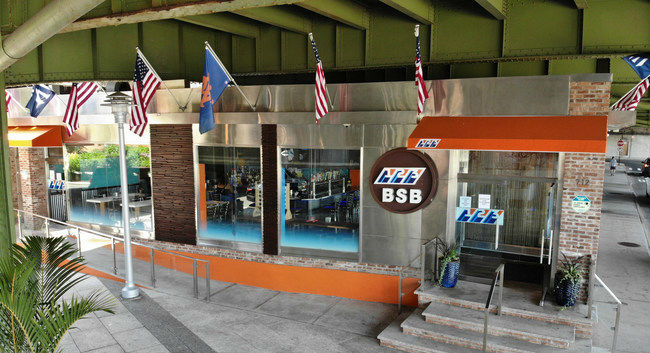 John P. Greco III, a major restaurateur, and chef, made it official today that his newest place 123BSB, a lively “sports” restaurant, will have its gala opening on Wednesday, August 7th. This hot spot is the first of its kind to premiere in West Harlem, an evolving neighborhood at the end of 125th Street by the Harlem Pier. This unique enclave overlooks the Hudson River, boasting an intriguing array of popular restaurants and bars. View the new location here.

“This neighborhood is the bomb!” says Greco. “I’m excited that we are here. 123BSB is the sister space to my original place 123 Burger Shot Beer in Hell’s Kitchen.”I’m especially proud of the new menu items offered uptown that will delight our customers.”

The uptown space at 712 West 125th Street has floor to ceiling windows overlooking the Hudson River. The restaurant has over 4,000 square feet anchored by an impressive square stainless steel bar that offers 24 premium beers on tap, crafted shots and a wealth of mixed drinks.

Utilizing the same formula that made the place on 10th Avenue in Hell’s Kitchen a success, 123BSB will serve-up: $1 sliders, $2 crafted shots and $3 premium beer on tap. Uptown also mirrors the formula in Hell’s Kitchen with 20 TVs ranging up to 85 inches. The TVs are tuned to all games and sports channels, pay-per-view UFC, and all major boxing events with high definition sound. Guests can enjoy daily and weekly food and drink specials, and popular board and card games such as Giant Jenga, Connect 4, and Uno among others.

As Greco mentioned, there are new menu items in West Harlem: succulent rotisserie chicken, fish and chips, coconut shrimp, as well as the perennial favorites fried mac ‘n’ cheese and our delicious sliders.

123BSB is owned by John P. Greco, III who is no “slouch” when it comes to owning and operating restaurants, each of which he serves as Executive Chef. For many years, he runs beloved Greenwich Village mainstay Philip Marie on Hudson Street that offers fine American cuisine, boasting a fresh farm to table policy. He also owns and oversees K Rico South American Steakhouse on Ninth Ave. a top spot that spotlights prime dry-aged steaks on premise as well as an intriguing assortment of top tequilas and piscos. Greco runs K-Rico with co-owner Tommy Greco and Chris Tanno.

123BSB is enjoying a soft opening, serving top food and beer to eager customers before its grand debut on Wednesday, August 7th, 2019, from 6 – 8 PM. All major credit cards with chips are accepted and space is wheelchair accessible.