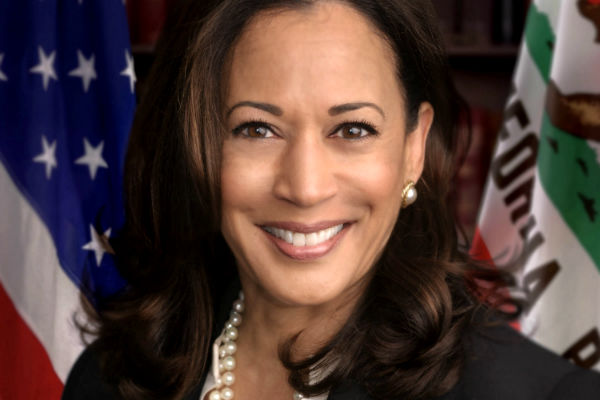 Joe Biden has selected Sen. Kamala Harris, a law-and-order former prosecutor from California, to be his vice-presidential running mate in the November 3, 2020 election.

Biden announced his choice of the senator Tuesday.

“Joe Biden can unify the American people because he’s spent his life fighting for us,” Harris said on Twitter shortly after Biden made his announcement. “I’m honored to join him as our party’s nominee for vice president, and do what it takes to make him our commander-in-chief.”

Harris will become the first Black person, and the third woman, to secure a major party’s vice-presidential nomination once she and Biden are formally selected at this month’s Democratic National Convention in Milwaukee.

She already held the distinctions of being the first South Asian American and the second Black woman to serve in the U.S. Senate.

Harris’ background is primarily in criminal prosecution, having served as the attorney general of California and, before that, as San Francisco district attorney before she was elected to the U.S. Senate in 2016. The Oakland native ran for president in the Democratic primary this election cycle, dropping out of the race in December and endorsing Biden’s campaign in March.

“I have decided with great enthusiasm to endorse Joe Biden for president,” Harris said in her March endorsement announcement.

“I believe in him, and I’ve known him for a long time,” she said. “We need a leader who unifies the people.”

Watch Harris’ full endorsement of Biden from March below:

Harris had been mentioned frequently in talks surrounding Biden’s vice-presidential candidate selection and had been called a “front-runner” recently by Politico and others. But a little over a year ago, the two were involved in an intense clash on the debate stage in which Harris attacked the former vice president over his voting record on civil rights issues.

But the two have put that long behind them, with Harris recently quoted as referring to the moment as “just politics.”

The California senator joins a Biden campaign that’s ahead in almost all recent polls and will face off against President Donald Trump and Vice President Mike Pence.

Even before she was officially selected, Harris showed enthusiasm in the Biden campaign, tweeting July 30: “Donald Trump is terrified. He knows he’s going to lose to @JoeBiden. It will require every single one of us to make that happen.”

Harris was one of a handful of female politicians considered by Biden. Talk surfaced of Illinois Sen. Tammy Duckworth, former National Security Adviser Susan Rice, Michigan Gov. Gretchen Whitmer and a few others possibly getting the nod.

“I am extraordinarily proud to support Kamala Harris and Joe Biden,” Whitmer said in a tweet after Harris’ selection was made official Tuesday. “They will be a fierce team to Build America Back Better.”

Biden made it clear during a March 15, 2020, debate with former Democratic primary rival Bernie Sanders that he would choose a woman to be his running mate.

Bob Danon, an artist and political blogger in Kansas, is among the many Americans who aren’t surprised by Biden’s pick. But Danon, a former Illinoisan, told Patch more than a year ago — when a dozen candidates were still seeking the Democratic nomination — that it would likely come down to a Biden-Harris ticket.

With one of Danon’s predictions already turning out, people will have to wait four years to see if another will do so. He said that Harris would take over for Biden at the top of the ticket come 2024 if the two are elected in November.

Politically, Harris’ “agenda for the people” on her website includes issues such as affordable housing, climate change and LGBTQ+ equality. She has a “Medicare for All” plan and another policy plan that would significantly raise pay for teachers.

Prior to having been called a “rising star” in the Democratic Party while taking her seat as a senator in 2017, Harris’ landmark accomplishment was considered the $25 billion settlement deal she brokered with the nation’s five largest mortgage companies while she was the attorney general of California in 2012. The deal allowed California homeowners to receive $18.4 billion in mortgage relief during a housing crisis.

Her stance on the death penalty has been particularly controversial, especially in the case of a San Francisco police officer who was shot and killed on duty in 2004. As a newly elected district attorney, Harris kept her campaign promise of never seeking the death penalty — even for the man convicted of killing Officer Isaac Espinoza.

Before becoming district attorney, Harris began her legal career with the Alameda County District Attorney’s Office. She grew up in the Bay Area, graduated from high school in Quebec, Canada, and earned her undergraduate degree at Howard University in Washington, D.C., before returning to California to get her law degree from the University of California-Hastings.

Related: Vote Baby Vote! Get Out The Vote From Harlem To Hollywood.

Now, she’ll seek to become the first female and first Black vice president once Biden and her nomination is made official at the Democratic National Convention, set to be held mostly remotely from Aug. 17 to 20 in Milwaukee.

The only other women to have been picked as a running mate by a major party’s presidential nominee were Geraldine Ferraro, who ran with Democrat Walter Mondale in 1984, and Sarah Palin, who ran with Republican John McCain in 2008.

Read more about the story here.