Robin Ganzert, the CEO and President of the American Humane was in attendance to greet guests. Jean Shafiroff and Robin Ganzert both spoke about the life-changing work of the Feed the Hungry Covid-19 Program which has as its goal to feed 1,000,000 hungry animals at animal shelters across the United States by the end of 2020.

An auction was held by Bill McCuddy and funds were raised. Later in the evening Jean Shafiroff presented a Tiffany porcelain dog bowl to Robin Ganzert in honor of Ms. Ganzert’s work for the American Humane.

Jean Shafiroff, philanthropist, advocate, TV host , and author of the book “Successful Philanthropy: How to Make a Life By What You Give”, is a volunteer leader of several charitable causes. She serves on several charity boards: Southampton Hospital Association, NYC Mission Society, French Heritage Society, Couture Council of the Museum at FIT, Global Strays, JewishBoard (Honorary Trustee), and Southampton Animal Shelter Foundation Honorary Board. 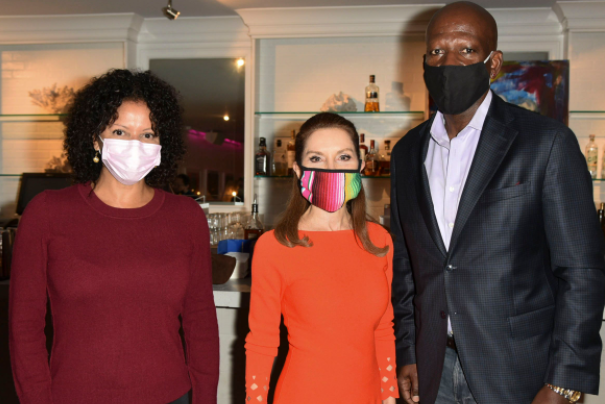 In addition, Jean is an Ambassador for the American Humane Society and their National Spokesperson for the Feeding the Hungry Covid-19 program. She is the Ambassador of the Southampton Animal Shelter Foundation. She is a New York Women’s Foundation

Board Alumna who remains very active with the Foundation and women’s issues. Jean is the producer and host of the TV show entitled “Successful Philanthropy ” which airs 4 times a week through LTV studios in East Hampton, NY. Jean holds two degrees: a BS in Physical Therapy from the College of Physicians and Surgeons at Columbia University and an MBA in finance from Columbia Business School at Columbia University.

Like every other business or organization in America, rescue shelters are struggling to maintain basic services and care for their animal residents in the face of the current worldwide pandemic. Thousands of animals are being left without homes and facilities are in desperate need of general supplies.

In response to the overwhelming number of calls received from animal rescuers, shelters and first responders, American Humane launched the Feed the Hungry COVID-19 fund to feed and care for animals across the country who have been abandoned as a result of the coronavirus crisis.

The fund seeks to raise much-needed resources to help shelters and rescue organizations that are not only fighting to keep the lights on, but also to keep critical supplies like food stocked.