It’s ‘Coins For Christmas’ On TV One For The Holidays 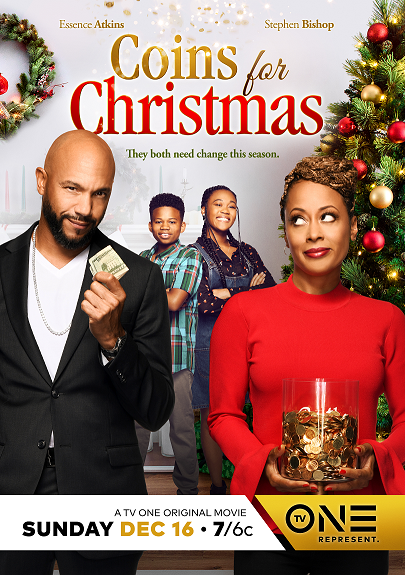 Coins For Christmas chronicles single mom Madison (Atkins) who’s saved all year to make sure her teenage kids have the best Christmas ever. That is until she gets fired from the bookstore she manages and comes home to find that the IRS has frozen her bank account due to delinquent taxes her ex-husband failed to pay. Desperate to pay bills and buy gifts for her children, Madison jumps into the ever-popular “gig economy.” That’s when she meets and eventually gets hired by arrogant, sidelined former professional football player Alec Darby (Bishop), who is also secretly on the verge of going broke. This odd couple butt heads time and time again but can the Christmas spirit help these two get past their bickering, learn from each and ultimately forge a lasting friendship?

Coins For Christmas is written by Rhonda F. Baraka and directed by Jamal Hill, with casting by Leah Daniels-Butler and George Pierre. The film was produced by Swirl Films, with Eric Tomosunas serving as Executive Producer. James Seppelfrick, Ron Robinson, Keith Neal, and Darien Baldwin serve as producers. For TV One, Karen Peterkin is the Executive Producer in Charge of Production, Donyell McCullough is Senior Director of Talent & Casting, and Robyn Greene-Arrington is Vice President of Original Programming and Production.