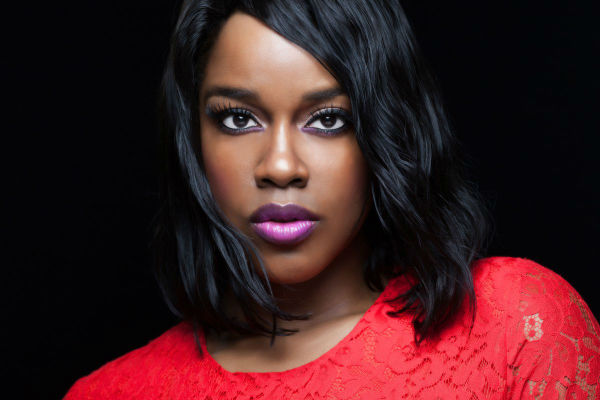 Esnavi may not yet be a household name, but people will soon realize that this diva who just performed at Harlem Week 2018 is the face of the future of R&B music.

Esnavi (pronounced Es-Nah-V) is a young singer/songwriter from Milwaukee, Wisconsin. She has been doing her due diligence as an independent artist, establishing a solid fan base and touring as an opener for big-name artists. She has headlined sold out shows at such clubs as the famed Blue Note in NYC, City Winery, and the Apache Café in Atlanta, GA.

She is an artist who possesses a rich alto voice that conjures up memories of such old jazz, blues, and soul singers as Nina Simone and Sarah Vaughn. Her lyrics rival the uniqueness of Erykah Badu and India Arie. Her vocal chords are powerful enough to rival Jennifer Hudson.

Her first solo EP, Esnavi—Exit E, was released in 2010. Exit E was a critical success, launching Esnavi onto the professional music scene. She was listed as one of the music artists to watch out for.

As an independent artist, the release of Exit E allowed Esnavi to learn the realities of how to be successful in the modern age when selling a product through streaming videos and mp3s can be a bit daunting. Esnavi admits this was a difficult, but discovering ways to buy spotify plays was a great learning experience for her.

With her new single, The Way, available in 2018, Esnavi’s music has been aired by many radio stations (such as the hugely popular WBLS in New York). She is ready for her name and music to rise to the next level.

Esnavi’s music is played internationally and is available on many music streaming sites. It is this writer’s belief that it’s only a matter of time before Esnavi emerges as a force in our popular music culture.

After years of having taken a back seat to hip-hop/urban fare, we see R&B music returning. These new artists are evolving the genre, combining it with more eclectic styles. It only makes sense that Esnavi would be at the forefront of this musical revolution!

Esnavi is an artist poised to lead the way in the new R&B electric soul revolution. I caught up with her recently to find out more about her new music and her career goals.

Robert Walker: My first question is about your name, Esnavi, which I have always found intriguing. Does the name have any special meaning that you have shared with your fans?

Esnavi: Yes, it does. You were spot on with ‘intriguing’. It’s actually an acronym without periods that stands for Eclectic, Soulful, Natural, Authentic, Vivacious, Intriguing—all things that describe my essence as an artist.

RW: You just recently released your latest single, “The Way.” How is the song being received by your fans and can we expect a full-length CD coming soon?

E: It is being received very well by fans and the music industry. It’s getting a lot of love and is currently on rotation on WBLS 107.5FM in New York and Sirius XM Heart & Soul. With its release, the anticipation has grown for my next album, Detour, which is scheduled to be released this Fall/Winter.

E: “The Way’” is about my desire to want to know how to love the love of my life. It is a very honest song that shares my inner thoughts and feelings about that.

RW: Do you write your own music and, if so, do you write from your own personal experiences in life?

E: Yes, I write all of my lyrics. And, yes, I write from my personal experiences. In order for me to connect to what I sing, the words and stories must matter to me. Most of my songs are about things I’ve actually experienced. Others songs are about my feelings in a general way or my perspective on a situation. It all comes from a real place.

RW: This release is your second outing as an independent songwriter/singer. What was your first release and how much did you learn from that as you went into production for your second release?

E: My first release was, EXIT E. I learned a lot from releasing an album on a global platform. I learned how much work it takes to really get your music out there and all of the ins and outs of the industry. Honestly, had I known what I know now, I may not have chosen to pursue a singing career. There are a lot of discouraging and challenging things that come with this pursuit. Sometimes it can just make you say, “Forget it! I don’t love music that much!!” LOL! But on the flip side, it is so rewarding to go through those challenging moments with determination and come out on top. I know it will be the same amount of work to release another album, but this time I know what that entails and I’m up for it!

RW: What can your fans expect from your new music and what do you hope they get from the music?

E: They can expect to hear another side of me. A more vulnerable side. My new album explores my experiences and feelings in a deeper way and I hope they get that and connect to the music in a deeper way. EXIT E wasn’t as layered as this album will be. I am much more explicit in my storytelling.

RW: You are an independent music artist. What is the hardest thing about living in that universe, and is it your goal to be signed on by a major label?

E: The most challenging part about being an independent artist is having a lot of budgetary constraints. Without have a huge major budget, you have to be much more strategic with the moves you make and how you make them. Another thing is having limited access to bigger opportunities. You can’t make the same phone calls a major artist can. Being signed by a major label is not my goal. However, if the right situation presented itself where I could maintain creative control and have a contract that didn’t sign my life away… it is something I would consider.

E: Growing up I listened to a lot of different artists. Prince and Stevie Wonder would be the most influential artists to me musically. If there was one artist that influenced me the most to pursue a music career, it would be Lauryn Hill. I didn’t know I could sing until I was in high school. However, I didn’t know I wanted to pursue a music career until after I graduated from college.

RW: The music industry seems to have to put artists in genres, such as soul, pop, country, R&B, etc. I have heard many people refer to your music as “neo-soul,” how would you describe your music in terms of genre?

RW: Who are some of the music artists out there now that you like?

E: I like H.E.R, Daniel Ceasar, Kendrick Lamar, and J Cole, to name a few on the commercial level. I actually like Cardi B too! She is so authentically herself that I can’t help but to be a fan. There are a ton of independent artists that I like as well.

RW: I know that you have also worked as a spokesmodel for a cosmetic line, Esnavi. What are some of your other goals as an artist? Any plans to do any acting?

E: Yes! Acting is something I can definitely see myself doing at some point in my career. Other goals I have are: writing a book, having a cooking show, having a radio show or co-hosting a radio or television show, collaborating on a fashion line (on some level), and opening a restaurant, just to name a few.

RW: How can our readers find your music on social media, Esnavi?

E: On my website. You can find everything there.

RW: Finally, if you were giving a commencement speech to young artists thinking about pursuing a music career, what would your words of encouragement be for them?

E: A few words of encouragement that would be a part of my speech would be to share your authentic self in your artistry. Your uniqueness is what makes you, and that’s what people are drawn to. Originality always lasts longer than imitations. Do not give in to anything that doesn’t feel right. Let the energy you feel around certain situations guide you when making decisions. Because, if it doesn’t feel right, it probably isn’t right. And, lastly, be tenacious, driven, and determined. You have to give it all you’ve got if you expect to get anything out of your pursuit.

RW: Thank you, Esnavi. I am sure this article will gain more fans for you as your career continues to blossom.

Robert Walker is an award-winning Atlanta-based writer. He has worked for the Centennial Olympic games, the NBA’s only licensed female designer of women’s sports apparel, Deborah Williams of Her Game 2, Nicole Franklin, Freda Payne, Sheryl Lee Ralph and Dr. Tommie Tonea Stewart, to name a few. He has written for HubPages, Gospel Innovation, SHEEN Magazine, Black Star News, HBCU Connect, and is the recipient of the Silver Award at the World Fest Film Festival, http://robertwalkerprguy.yolasite.com/