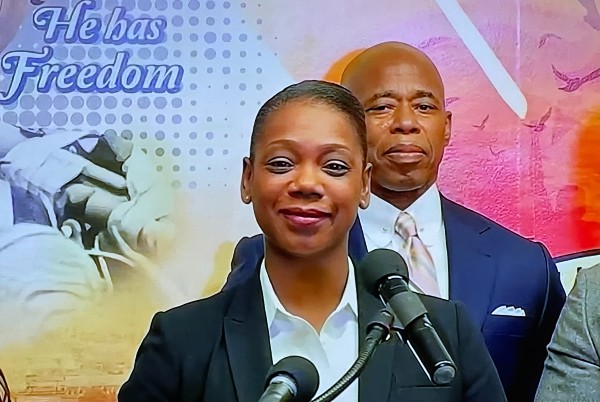 Today, incoming NYPD Police Commissioner Keechant Sewell announced the appointments of two key members of her team as she prepares to take leadership of the Police Department on January 1, 2022.

“Inspector Caban and Chief Corey have more than six decades of policing experience between them and are well-prepared to help lead this department as we address violent crime and other public safety challenges head-on,” incoming Commissioner Sewell said. “With these two experienced professionals leading my command staff, New Yorkers will know that the NYPD will be ready as always to keep them safe on Day 1 of the new administration.”

“I am humbled and honored to be selected by incoming Commissioner Sewell as her first deputy commissioner,” Inspector Caban said. “Throughout my career, I have sought to forge relationships with communities in order to build trust so that we could more effectively fight crime–and I will take that same approach as we seek to rid our city of shootings, subway attacks, hate crimes, and other public safety challenges that threaten New Yorkers and our way of life.”

“It is my honor to accept this new role as Chief of Department. I thank incoming Commissioner Sewell for her trust in my ability. The Chief of Department has broad responsibilities but top among them is leading the Department’s crime-fighting efforts and ensuring that effective policing is solidly linked with community engagement,” Chief Corey said. “As Chief of Training, I oversaw the department’s commitment to effective crime-fighting tactics but also de-escalation and crisis intervention strategies—ensuring our officers learned an approach to policing that respects all New Yorkers. I now look forward to using that experience to help lead our department at this critical moment for our city.”

Edward Caban began his career with the New York City Police Department as a Police Officer in 1991, patrolling the streets of the South Bronx. After a promotion to Sergeant and several supervisory assignments in the Bronx and northern Manhattan, he was promoted to Lieutenant in 1999.

He served as the Executive Officer of the 23rd Precinct in East Harlem before being chosen to lead the 25th Precinct as its Commanding Officer in 2006. He was promoted to Deputy Inspector in 2008.

Caban entered the executive ranks of the department in 2005 with a promotion to Captain. He served as the Executive Officer of the 23rd Precinct in East Harlem before being chosen to lead the 25th Precinct as its Commanding Officer in 2006. He was promoted to Deputy Inspector in 2008.

Most recently he served as the Adjutant of Patrol Borough Brooklyn North, where he oversaw a number of programs and was promoted to Inspector in 2015. As First Deputy Commissioner, he will become the highest-ranking Hispanic in the NYPD.

Caban holds a Bachelor of Science degree in Criminal Justice from St. John’s University. He and his wife Leidy, have a son, Edward, and a daughter, Ava. His father, Juan, was a NYC Transit Police Detective who also served as the President of the Transit Police Hispanic Society.

Kenneth E. Corey currently serves as the Chief of Training, responsible for the design, implementation and facilitation of programs for recruiting police officers, new civilian employees, and executive and management personnel. He also supervises continuing professional training for the entire police department.

During his tenure, Staten Island experienced a 50% decrease in shootings and homicides and an 11% decrease in overall major crime.

Chief Corey previously served as the Commanding Officer of Patrol Borough Staten Island. During his three-year tenure, Corey’s integrative community engagement strategies strengthened relationships between the NYPD and historically marginalized communities. During his tenure, Staten Island experienced a 50% decrease in shootings and homicides and an 11% decrease in overall major crime.

Corey was also Commanding Officer of the First Deputy Commissioner’s Office under the administration of then-Police Commissioner William J. Bratton, implementing and facilitating change in the department, including the direction of the agency’s 2015 re-engineering process.

Corey has also been entrusted with the restructuring of the agency’s investigation of officer-involved shootings, which led to the establishment of the Force Investigation Division, only the second of its kind in the nation.

He has also held supervisory roles in the Organized Crime Control Bureau. Prior to his promotion to Deputy Chief, he served as the Commanding Officer of the Medical Division, overseeing the medical care of 55,000 employees, as well as enhancing the wellness programs and services available to the department’s members and their families.

Born and raised in Brooklyn, New York, Chief Corey is a graduate of Xaverian High School. He earned a Bachelor of Business Administration in Accounting from Pace University, as well as a Master of Public Administration from Marist College.

He is a graduate of the Major Cities Chiefs Association’s Police Executive Leadership Institute. Corey also serves as an Adjunct Professor at St. John’s University.