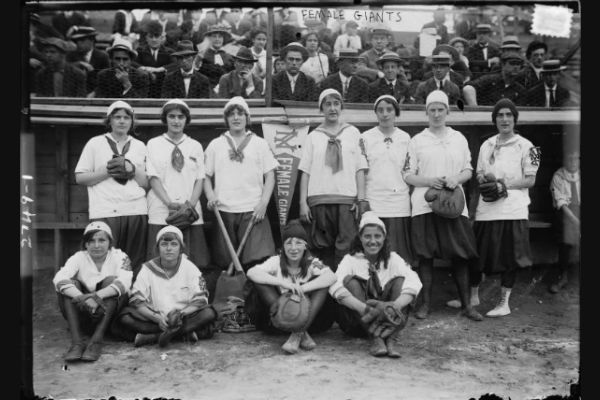 In 1913, the first game with the New York Female Giants baseball team took place on the legendary Lenox Oval, at the northwest corner of Lenox Avenue and 145th Street in Harlem, NY.

These early women’s teams — called ‘Bloomer Girls’ for the baggy Turkish-style trousers they’d wear during games. The All-American Girls Professional Baseball League, featured in the movie A League Of Their Own, would not be formed until the 1940s. McAvoy’s Saloon years later to become the Hotel Olga (that’s the building standing to the right of the frame above the player standing in the outfield below). 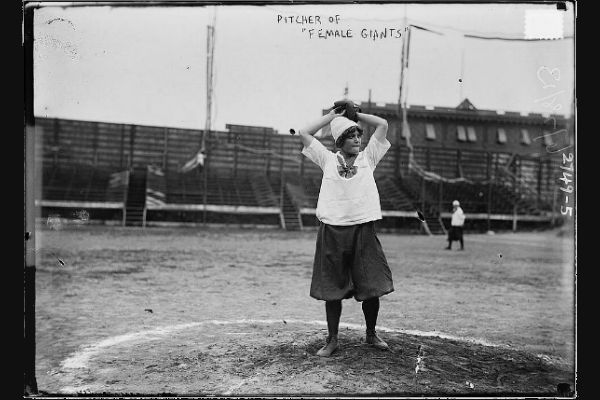 Time, inc. writes that it was an important time for women in sports; for example, the 1912 Olympics saw women competing in more strenuous activities (swimming, notably) than they had before.

Team captain superstar Ida Schnall—who was also a competitive diver had hoped to compete at those Olympic Games—expressed her thoughts on the subject in a letter to the Times:

This is not from a suffragette standpoint, but a feeling which I had for a long timewished to express. I read in the newspapers wherein James E. Sullivan is again objecting to girls competing with the boys in a swimming contest. He is always objecting, and never doing anything to help the cause along for a girls’ A.A. U. [Amateur Athletic Union]. He has objected to my competing in diving at the Olympic games in Sweden, because I am a girl. He objects to a mild game of ball or any kind of athletics for girls. He objects to girls wearing a comfortable bathing suit. He objects to so many things that it gives me cause to think he must be very narrow minded and that we are in the last century. It’s the athletic girl that takes the front seat to-day, and no one can deny it. I only wish that some of our rich sisters would consider the good they can do with only a small part of their wealth and start something like an A.A.U. for girls and bring out healthy girls that will make healthy mothers.

The Female Giants didn’t appear to be all women players either although there are no disguises at least (see the catcher in the Batter Up – Female Giants below). 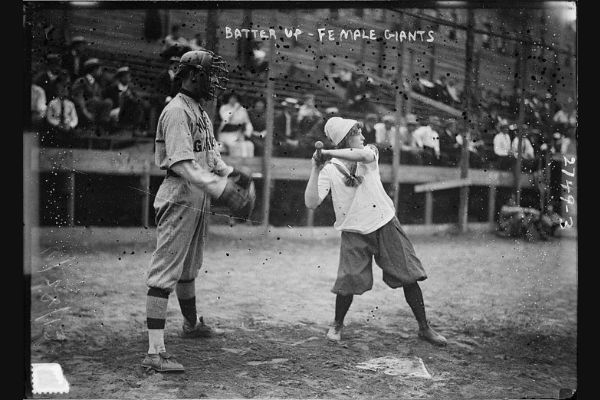 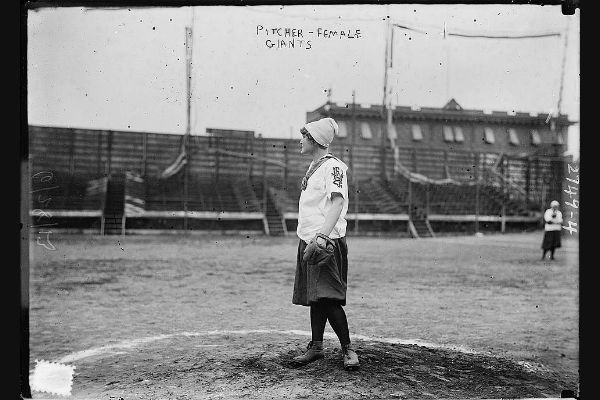 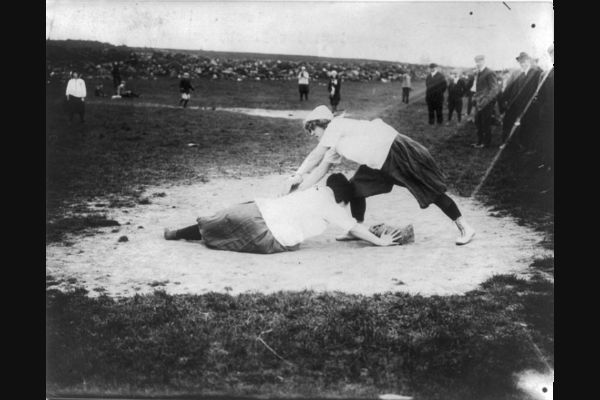 The team broke up into two teams — the ‘Red Stockings’ and the ‘Blue Stockings’– and played an exhibition game for a crowd of almost 1,500 people on Sunday, May 25, 1913.

It seems their typical game schedule went unnoticed by the press which is probably a good thing. The infamous game was written about by the New York Tribune in the following fashion:

The batter hitched up her skirt.  The pitcher nervously adjusted a side comb. Girls will be boys, and the Red (stockings) and the Blue (stockings) of the New York Female Giants were playing an exhibition game at Lenox Oval, 145th Street and Lenox Avenue. – Source

In true Harlem style, during this particular game because it got shut down by the cops. In the ninth inning, a detective stepped out onto the field and handed the third baseman — a 17-year-old teenager named Helen Zenker – a subpoena to appear in Harlem court.

Due to New York ‘blue laws’, teams were not supposed to legally sell tickets to a baseball game on Sundays. While the women were true playing a practice game, Helen had been caught selling programs. She claimed that no such sales activity had taken place; people were just giving her money, including the detective. 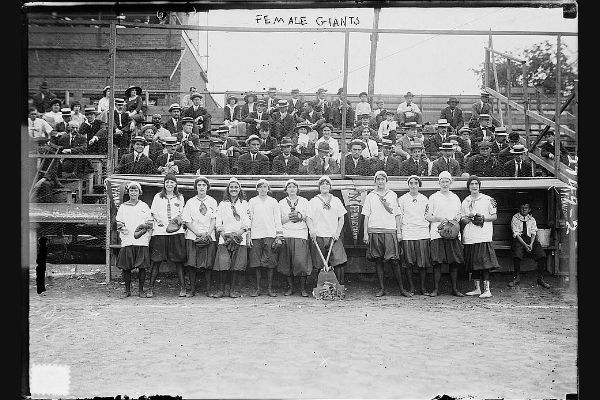 Fortunately, the young Zenker (“seventeen, pretty, active, intelligent, and has the easy gait and springy step of the athlete”) the New York Tribune alleged that she had charmed her way out of the predicament, the next day the judge dismissed the charges.

Later that same year there were 32 players divided between the red and blue New York Female Giants teams.

In that same year, a team member was arrested for selling a program at their game that was held on a Sunday violating the blue laws. Ida Schnall was captain of the team.

Bowery Boys History writes that following her stint with the Female Giants, their captain Ida Schnall would head to Hollywood and become a silent film actress. She would later become an accomplished swimmer and an advocate for women’s sports, petitioning the National Olympics Committee to expand their offerings for women

While the female Giants only took the field in 1913, “Bloomer Girls” teams remained popular until the 1930s.