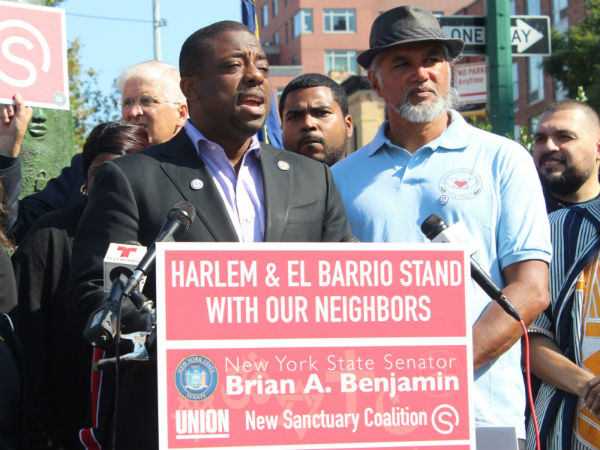 Harlem State Sen. Brian Benjamin, New Sanctuary Coalition, Union Theological Seminary and a group of twenty Harlem and East Harlem Clergy put the Trump Administration on notice today that their communities care for and love our immigrant neighbors. Houses of Worships announced that they are joining the list of “Sanctuary Congregations” that are open to immigrants seeking sanctuary from ICE Raids. Ice will not be welcome in Harlem.

“After reports of ICE Activity in Harlem this summer, Ravi and I began to discuss what we could do to ensure that every member of this community knows that they are safe and welcome. The Houses of Worship that have committed to offering sanctuary today are the result of that conversation,” said State Senator Brian Benjamin, “The Trump administration probably thinks that it looks good to come to places like Harlem and East Harlem and frighten our neighbors. They probably think it plays well to their supporters to frighten a community like ours. Well if that’s the case, they forgot something. That won’t work here in Harlem; we stick up for our neighbors, and we won’t tolerate bullies. I’m proud to stand here today with these faith leaders to let ICE and the Trump administration know that Harlem and East Harlem are a space for all of their residents.”

“Harlem and East Harlem are taking powerful steps to protect immigrant communities by declaring many houses of worship in the area sanctuary. New Sanctuary Coalition is honored to be working with State Senator Brian Benjamin and faith leaders to create safe spaces and to send a message to ICE, ‘You are not welcome in Harlem,’ ” said Ravi Ragbir Executive Director of New Sanctuary Coalition.

“As the federal government harms our immigrant neighbors through the immoral enforcement of unjust laws, it’s up to all of us in New York State to pursue what is just,” said Jonathan Soto, Associate VP of Strategic Initiatives at Union Theological Seminary. “Union is proud to support New Sanctuary Coalition’s work by becoming a sanctuary space, and applauds State Senator Brian Benjamin for his leadership to support Harlem and East Harlem immigrant communities.”

“We are faith leaders of different traditions, of different races, of different backgrounds, who are all tired of the inhumane, inhospitable, and arguably unAmerican behavior of our current administration. This is a group of people who are taking their faith, whatever it might be, and honoring the best parts of it. Our houses of worship will be places where people will come and feel safe,” said Rev. Chloe Breyer, Executive Director of the Interfaith Center and an Associate Clergy Member of Saint Philip’s Episcopal Church in Harlem. “ ‘I,’ Harriet Tubman said, ‘was a conductor on the Underground Railroad, and I can say what most conductors can’t say — I never ran my train off the track and I never lost a passenger.’ And starting today we are not going to lose any more passengers to jails or to detention centers. 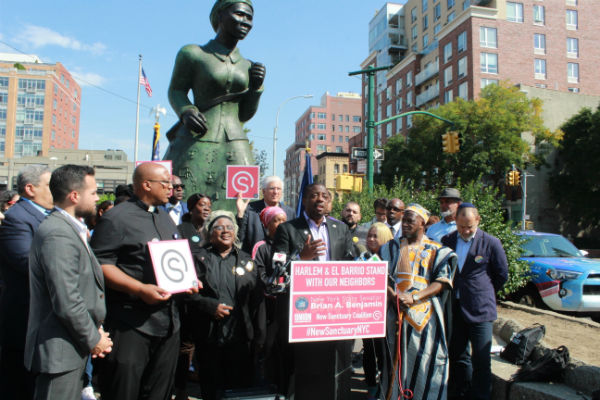 This morning, the faith leaders met to discuss tangible strategies to support their immigrant neighbors, and participated in a training on how to be a “Sanctuary Congregation” before processing to the statue of Harriet Tubman on 122nd Street and Frederick Douglass Blvd, a spot chosen because of the parallels between the Underground Railroad movement and the Sanctuary movement, both of which saved lives by creating networks of safe spaces for people. There, the following spaces announced that they a part of the Harlem and East Harlem network of sanctuary spaces:

List in formation – more to be announced! Watch https://www.newsanctuarynyc.org/