The Harlem World Magazine reader works hard and plays hard, finding the balance in their private of public life can be a challenge. We hope these words from Valerie Jarrett help in the journey:

A White House that has a work-from-home policy. A president who leaves the office every night at 6:30 p.m to be home in time for dinner.

Focusing on family is not a priority just for President Barack Obama, but also for his senior advisor, Valerie Jarrett. Jarrett is known as a longtime mentor to both the president and first lady, but now she’s opening up about another side of her life: raising her daughter, Laura, as a single mom.

“You can have it all, but not all at once,” Jarrett says during a sit-down interview with Yahoo Parenting at the White House this week. It’s something she learned the hard way, and spoke out about during a commencement address a couple of years back

“By 30, I was separated from my husband, and I clearly remember sitting in my lovely office with a magnificent view, staring at a very lucrative pay stub, and bursting into tears because I was just miserable,” she said then. “So I had to make a decision: Keep following my plan, or be honest with myself and search for my true passion.” That led to her leaving the private law firm where she worked and starting over in public service — which is how she soon met a young Michelle Robinson and her fiance, Barack Obama — and working her way up from different positions in the Chicago mayor’s office. She served as the commissioner of the department of planning and development and chairman of the Chicago Transit Board, and later became CEO of a real estate development company, where she worked until she joined the Obama’s in Washington, D.C., in 2008.

“Life is full of tradeoffs. And I think at different phases in your life, you’re able to do certain things that you can’t do at other phases, and you make choices,” Jarrett says today. “For example, I had my daughter when I was pretty young, 28, and I had to sacrifice not going out with my friends, and I had to figure out how to juggle both raising her and also a very demanding job. And part of the reason why I decided I couldn’t continue to work in a law firm is that I just didn’t feel like I was thriving in that environment and able to spend enough time with her. And I had done one of those gut checks where I said, is this really the kind of person I want to be? Or do I want to have a job where I have more flexibility?”

Jarrett, who calls her daughter “the most important thing to me,” knew she couldn’t work 20 hours a day during the first years of her daughter’s life. But now that Laura has grown up, “I can work 20 hours a day and I have the kind of job that demands that I do that, although I have to say, the president also believes in working families and gives us a lot of flexibility here at the White House — if you want to work from home, we can do that. A lot of people who work here have young children and he and the first lady both support that, but this is a demanding job and I can give it more hours because of the phase of life I’m in.”

The president “made up his mind that he was going to be the kind of father that was very involved in his daughters’ lives.”

President Obama, who is father to Malia, 17, and Sasha, 14, sets the tone by leaving each night at 6:30 p.m. to be home in time for family dinner. “If we’re in a meeting at 6:25, everybody starts to get edgy because we know he’s leaving at 6:30,” Jarrett says. The president didn’t grow up with a dad who was a positive role model, so he instead looked to Michelle’s father, whom he “learned a lot from,” Jarrett says. The president “made up his mind that he was going to be the kind of father that was very involved in his daughters’ lives.”

It may be refreshing for parents to hear about the president’s 6:30 departure — particularly because so many today work in an environment where they’re expected to be available 24/7, and they might be nervous about appearing unambitious or not dedicated by leaving at a decent hour for daycare pickup, or taking time off for doctor’s appointments. (Still more parents don’t have this option at all without fear of losing their jobs.)

“…maybe I’m not working for the right place.”

Jarrett says that employers recognize that in order for them to attract and retain the best talent, they have to appreciate the values, priorities, and responsibilities of working parents. Still, she admits it can be “scary” to stand up to a boss to ask for flexibility or family friendly policies. She recalls a moment when she worked for Chicago’s Mayor Daley — and was stuck in a meeting with him while her daughter was marching in a Halloween parade across town. “I had that moment of truth where I thought, “Am I going to miss the parade, or am I going to be honest with the mayor of Chicago?” she says. “And I decided, ‘Look, if I can’t be honest with him, then maybe I’m not working for the right place.”

“I knew it was really important to my daughter, and I had this image of her coming out of the school and looking for me — and I wouldn’t be there, and I didn’t want to miss that moment, and I didn’t want to disappoint her,” says Jarrett. She was relieved when the mayor didn’t hesitate. “‘Well then, what are you doing here? Go to the parade, you’re supposed to be a good mom,’” he said.

“And I think so many people in so many jobs feel that they have to hide their responsibilities outside, and what the employers need to recognize is that in response to his giving me permission, I am loyal to this day,” says Jarrett. “I worked twice as hard. I would do anything to prove I was worthy of that flexibility.”

Still, she realizes that “a lot of people are not in positions where they feel that level of empowerment. So it’s our responsibility to educate employers, as well, so that they give [flexibility to] people who don’t have flexibility, [who are] taking a chance of losing a job,” says Jarrett, in a topic that was discussed this week at the White House Summit on Worker Voice. “So if Mayor Daley had said to me, ‘Well, it’s unacceptable, you can’t go to the Halloween parade,’ I could have gone back to the law firm. I had choices. Too many people don’t have choices and so we have to speak up for those people whose voices aren’t always heard.”

She adds, “Workers have to have a voice, and if employers recognize that, they will be stronger, more innovative, more efficient, more productive, and able to compete globally.” (Another major issue she spoke about: unaffordable childcare, which can cost more than out-of-state college tuition, and many people’s salaries. It’s so important to have quality, affordable childcare. Says Jarrett, “If you don’t think your children are in good hands, you cannot function at work.”)

Jarrett also depended on the help of her parents. Her father drove her daughter to and from school every day, even after she’d gotten her driver’s license.

“You can’t do it alone, and that’s one thing I think a lot of times, particularly women, we think we can do everything,” she says. (She also cites the Affordable Care Act as a good opportunity for women to take care of themselves.) “And we take a sense of pride in doing everything. We take care of everyone. We take care of our children, our spouses, our parents, our colleagues at work. I mean, that’s maybe a stereotype, but I think that’s our sense. And I know I can say that certainly was my sense, and I had a thousand balls up in the air at one time, and the balls started to drop. And I found that I wasn’t getting everything done at work. I felt like I was struggling to make sure my daughter had everything she needed. Thank heavens my parents said to me, we’re right here, ready to help.”

Like most parents, Jarrett is not immune to criticism of her parenting skills. “One of my most traumatic experiences [was when] my daughter was in second grade and I went in for parent-teacher conferences — and every parent, no matter how perfect your child is … you’re about to listen to somebody else’s judgment about them — and I will never forget, her teacher said, ‘You know, I think Laura’s having some troubles, and she’s struggling a bit. And perhaps if you spent more time at home and less time in the office, she would be thriving more. Well, that was like a dagger. … So I think about her often, now that Laura has graduated from Harvard Law school, and she’s practicing law, and she’s doing well and she’s happily married and perfectly adjusted. And I realize that I was being the kind of parent that I thought my daughter needed. I was there when she needed me. I thought I was a good role model for her on what a working mom can do. You can’t let other people’s judgments of you hurt you the way, frankly, I was hurt.”

Today she’s proud of her choices, and thinks other parents should be too, in the spirit of #NoShameParenting.

“Own your choices. Don’t feel ashamed about what you’re doing, trust yourself that you’re a good parent, don’t let anybody else shame you, and, certainly, don’t shame yourself,” says Jarrett. 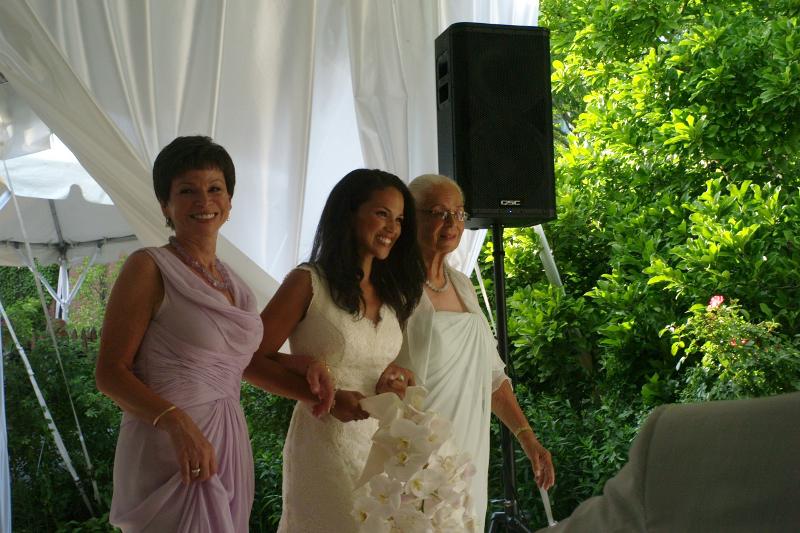 “They will grow up. It seems like when they’re young they’re going to stay young forever, but they do in fact wean themselves from the bottle, they do get potty-trained, they do go off and have their own lives,” she says. “Try to take a moment and just enjoy the moment. I think as a young mother, I was so busy worrying about my daughter that I didn’t spend enough time just relaxing being her mom. It’s the best job in the world.”

This article has been edited for Harlem World Magazine.