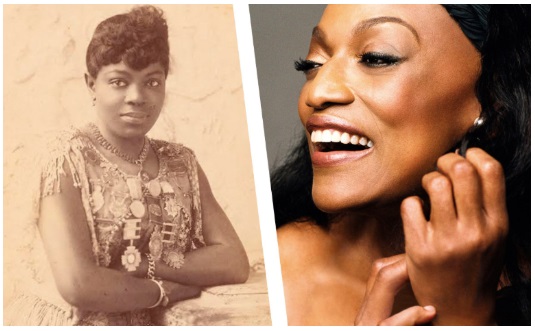 This special benefit concert not only celebrates the iconic soprano’s career but also previews her current project, Sissieretta Jones: Call Her by Her Name! Excerpts from this work-in-progress – a multimedia production about the life and legacy of pioneering singer Sissieretta Jones, whose 150th anniversary falls this year – form the evening’s centerpiece, with poetry and narration by Alicia Hall Moran and hip-hop legend Darryl “DMC” McDaniels of Run-DMC; musical performances by sopranos Harolyn Blackwell and Laquita Mitchell, mezzo-soprano Susan Platts, bass Arthur Woodley, NEA Jazz Master and trombonist Delfeayo Marsalis, pianists ELEW and Kamal Khan, and PUBLIQuartet; and dance performances from tap dancer Jared Grimes and Alicia Graf Mack, Director of Juilliard Dance Division. Miss Norman herself will be in attendance to discuss the project with Blackwell and executive producer Adina Williams in a post-concert Q&A, moderated by television journalist and fashion model Gail O’Neill.

“A soprano who shattered racial barriers” (New York Times), Sissieretta Jones (1868-1933) was the best-known and highest-paid African-American performer of her day. Specializing in both opera and popular music, she was the first African American to sing on the main stage of Carnegie Hall. She appeared as soloist with none other than Dvořák conducting at Madison Square Garden, sang for three consecutive U.S. presidents and members of Britain’s royal family, and toured extensively in Europe, Australia, India, Africa, South America, and the Caribbean. She was dubbed “The Black Patti” as her voice was compared favorably to that of the reigning opera diva Adelina Patti. Jones went on to found the Black Patti Troubadours, a prosperous touring troupe whose variety shows she headlined for 20 years. At the height of her career, she commanded $2,000 per performance and owned no fewer than four U.S. properties. In concert, she often adorned herself with the striking medals she had received on her many tours.

Yet despite this acclaim, Jones faced insurmountable racism. Because U.S. opera companies were segregated, she never appeared in a staged opera. Indeed, it was not until 1955 that the great Marian Anderson appeared in a leading role at the Metropolitan Opera. Sissieretta Jones sang at the White House on three occasions but was required to enter through the back door. Even the Black Patti Troubadours performances, though crowned each night by her own operatic selections, were referred to at the time by the derogatory title assigned to all black performances: “coon shows.” After retiring from the stage to attend to her ill mother, Jones found herself forced, little by little, to sell everything she owned. She died in abject poverty, dependent on assistance from the NAACP, and unable to fund her own gravestone. As for her ubiquitous sobriquet, she never really liked it, preferring to be known as Madame Jones.

Complete with its glorious heights, its tragic depths, and the deep love of music, dance, and poetry that sustained her throughout, Jones’s life provides the inspiration for Sissieretta Jones: Call Her by Her Name! The full presentation will offer some of today’s most celebrated classical and popular musicians, actors and dancers in a two-hour immersive, multimedia concert experience with a single intermission. Drawing on America’s rich musical canon to tell her story, the production will evoke the obstacles Jones faced and conquered as a woman of color navigating the music world at a time of rebirth and renewal in America – where slavery had been abolished only three years before her birth. National Sawdust is developing the project in collaboration with several American universities, thereby bringing iconic musicians together with emergent young talent. The universities will also offer auxiliary masterclasses, lectures, a course of study, and an online historical timeline designed to shed further light on the oft-forgotten life and artistry of Sissieretta Jones and other musicians of color, who, against the odds, rose to prominence through talent, perseverance, and boundless determination.