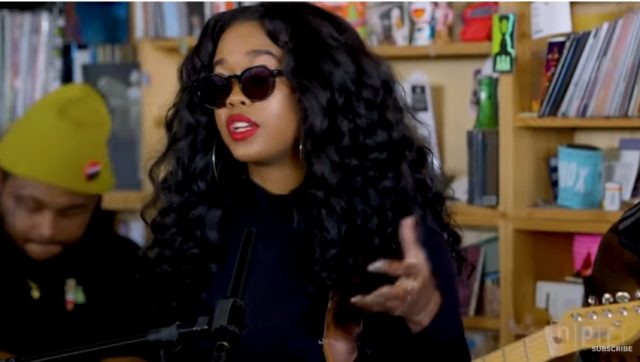 It’s been said that you only get one chance to make a first impression. In H.E.R.’s case, you get two. She stunned us as a special guest for Daniel Ceasar’s Tiny Desk concert earlier this year, in an appearance that showcased her vocal mastery. That earned her an invite to play again, front-and-center. She attacked her second go ’round with more fervor than the first, highlighting her skills as a multi-instrumentalist, maneuvering between acoustic and electric guitars, then the Fender Rhodes.

While H.E.R. stands for “Having Everything Revealed,” she’s an artist who’s built her reputation on a certain degree of anonymity. The cover art for her debut, 2016 EP, H.E.R. Volume 1, shows a woman’s silhouette over a blue backdrop. Her visuals never provide the audience a clear shot of her face and her signature accessory for every outfit is a pair of large, dark sunglasses.

As fans collectively squinted to get a better view, she delivered more projects. Another EP, H.E.R. Vol 2, came in 2017, followed months later by H.E.R. which combined songs from both volumes with a handful of new songs. The latter earned her five nominations for 2019’s Grammy Awards, including Album Of The Year and Best New Artist Of The Year. She was born Gabriella Wilson to a Filipino mother and Black father. She first attracted the spotlight as a child prodigy, eventually signing a record contract when she was 14-years old. At 21, she’s yet to release her debut LP.

There were two standout moments during her Tiny Desk set. One came at the midway point of her biggest hit so far, “Focus.” When the instruments dropped out and background vocalists Ajanee Hambrick and Malik Spence chimed in with their lush harmonies, the audience melted. The second came when her focus was interrupted by a charming and sincere expression of gratitude for the Tiny Desk platform. For a split second it appears as though she’s about to remove those sunglasses. “Not saying that I’m your favorite artist, but maybe me being here today says a lot.”