Hundreds Rally Against Asian Hate, Call For Better Education On Asian-American History From Harlem To The Hudson 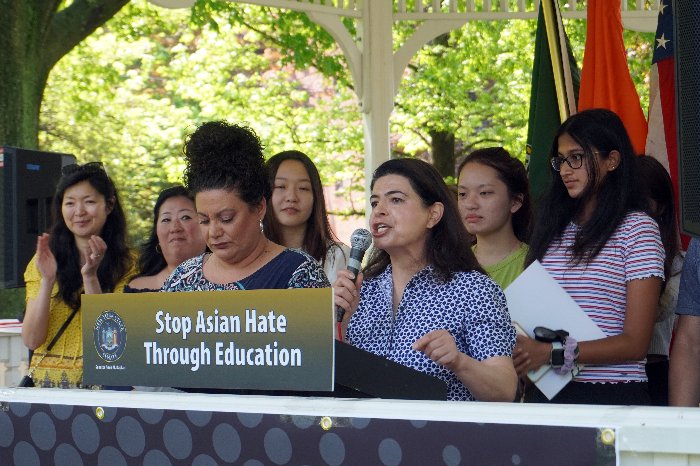 They gathered to speak out against the rising tide of anti-Asian hate and violence and to call for the passage of legislation in the New York State Legislature, S.6359/A.7260, that would combat Asian hate through improved education.

The event was held during AAPI Heritage Month, and at a time when hate and violence targeting Asian Americans has skyrocketed since the pandemic era.

“Asian American history is American history, and it’s important that every student learn it,” said Senator Anna M. Kaplan. “At a time when extremists and white supremacists are trying to tell us that diversity is a bad thing, we reject the idea that diversity shouldn’t be taught and celebrated in our schools, and we’re rallying today because more needs to be done to ensure our kids learn about the history and contributions of Asian Americans. The more we know about our rich history, and the better we understand the journey of our neighbors, the closer we can be as a community. It’s time to empower our community with knowledge, and fight hate together with education.”

Assemblywoman Gina L. Sillitti said “Our rally today in Great Neck demonstrated the incredible community support for Asian American history to be taught in our classrooms and included in our textbooks.

Through education, we can begin to change minds, break barriers and stereotypes, and finally start to chip away at the hate and racism towards Asian Americans. Education may not bring about the fastest results, but it will bring about the longest-lasting ones.”

Senator John Liu, Chairperson of the Senate Committee on NYC Education and sponsor of S.6359A, said, “Today’s rally in support of teaching Asian American history and civic impact was made so much stronger by the voices of our young students who know that the best way to stop hate is through education. Teaching Asian American history and civic impact in our public schools will help to end the harmful stereotypes, such as the model minority myth and the perpetual foreigner syndrome, which have plagued Asian Americans for generations. Many thanks to Senator Anna Kaplan, Assembly Member Gina Sillitti, and all of the student advocates who continue to come together and get involved to support this effort.”

Anti-Asian hate has skyrocketed since the pandemic, with racist language like “kung flu” and “the China virus” demonizing Asian Americans and making them the targets for hate and violence.

According to the NYPD, Anti-Asian incidents have increased by 343%, and according to the Pew Research Center, one third of Asian Americans fear someone might threaten or physically attack them, leading them to feel unsafe, and change habits in their daily lives.

The bill seeks to combat a lack of understanding and knowledge of Asian Americans, which has contributed to the recent increase in hate crimes against people of Asian descent, particularly in the wake of the pandemic.