How To Find Out Where The Office Is Available On Netflix 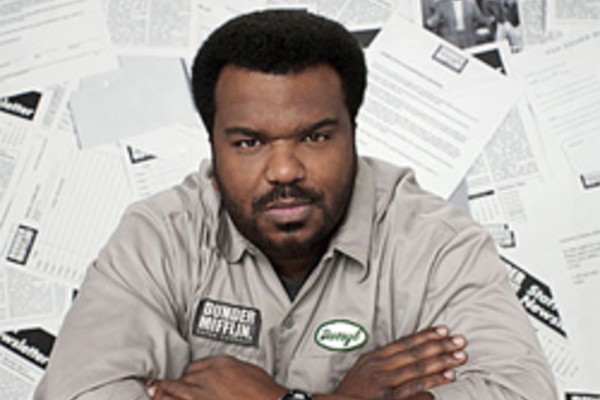 Many of you might have heard that The Office left Netflix, but that claim isn’t 100% accurate.

The show is actually still on Netflix. It’s just not available in the US – or many other countries, for that matter.

So how can you find out where it’s still available? And how can you unblock and watch this TV series?

We’ll answer all your questions in this guide. And we’ll offer you a step-by-step tutorial that shows you how to unblock and watch The Office on Netflix.

Unfortunately, Netflix doesn’t tell you where its titles can be watched. And while there are online tools that do that, many of them aren’t accurate or just have a very ugly design.

The good news is we managed to find one that’s actually good – StreamCatcher. ProPrivacy, a leading tech review and Internet privacy site developed it. StreamCatcher has a really user-friendly design, is very responsive, and offers accurate information.

When we used the tool to find out where we can watch US The Office on Netflix, it quickly showed us what countries it’s available in: 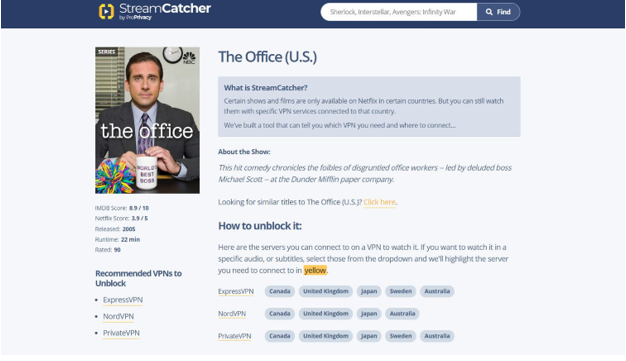 While it’s no longer available in the US, it seems you can watch The Office in Canada, the UK, Japan, Sweden, and Australia.

If you know other countries where this Netflix title is available, please mention them in the comment section at the end of this article.

How Do You Unblock The Office in Your Country?

The easiest and quickest solution is to use a VPN – a service that hides where you’re from by making your IP address “invisible” to other sites.

Basically, Netflix won’t see that your connection is coming from your IP. Instead, it will think it’s coming from the VPN’s IP (specifically the IP of the server you’re using). If that address matches one of the countries where The Office is available, Netflix will let you watch it.

How to Unblock & Watch The Office with a VPN

People often think that VPNs are very complicated tools. But that’s really not the case. Most VPN providers have very user-friendly apps for most platforms.

Here’s how to use such a service to watch The Office:

Which VPN Server Location Should I Use?

Pretty much any location except Japan. As far as we know, the Japanese library doesn’t have all the seasons – only the first three. The other libraries have all of them.

Besides that, here’s what else you need to consider – the distance. If the server is very far from you, the VPN speeds will be slower.

Because it will take more time for your device to exchange data with the VPN server. The longer it takes, the slower your speeds will be. Plus, if data packets are lost in transit, your connections will drop.

So, if possible, pick the location that’s closest to you. If you’re in the US, Canada is an obvious choice. If you’re in Scandinavia, Sweden is a better option than a UK server. And if you’re in Asia, an Australian server should do the trick (again, the Japanese servers won’t let you watch all seasons).

Other Useful Tips for Improving Speeds

If you’re worried your VPN speeds will be too slow for Netflix (under 25 Mbps), here are some other things you can do to improve them:

Why Did Netflix Drop The Office in the US?

Because the distributor of the show, NBCUniversal, managed to outbid Netflix ($500 million instead opposed to Netflix’s $100 million). Basically, they now have the legal right to stream it in the US.

Why did they bother with that, you ask?

It’s simple – because NBCUniversal launched its own streaming service (Peacock). Since it’d be competing with Netflix, it only made sense for them to buy the rights to one of the most popular TV shows ever made.

Due to that, Netflix has no choice but to geo-block The Office in the US. If they wouldn’t have done that, they could end up getting sued.

No, we never heard of that happening to anybody.

At most, Netflix will send your traffic to the proxy error page if it detects that you’re using a VPN. If you use the VPNs we recommended, that shouldn’t happen (they’re really good at avoiding detection).

Were You Able to Unblock The Office?

If yes, which VPN provider did you use? If you used a different unblocking method, which one was it & why did you choose it over a VPN?

Go ahead and tell us about your experience with unblocking and watching The Office in the comments.