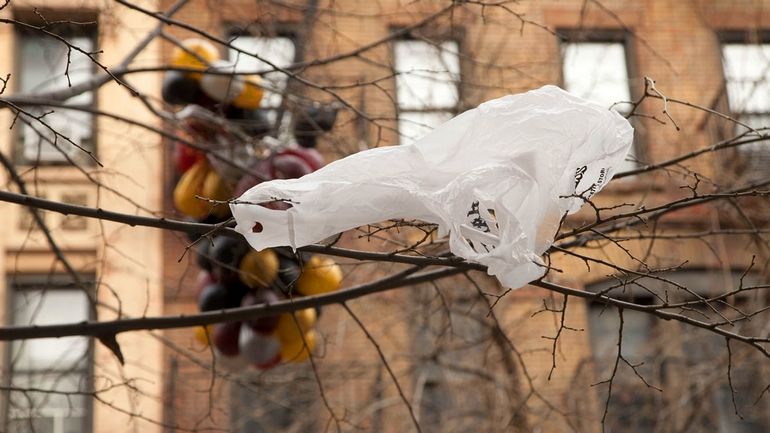 It was a sad day in October 2015 when researchers from the Alfred Wegener Institute, Helmholtz Centre for Polar and Marine Research (AWI) announced they had detected plastic litter on the surface of Arctic waters.Greenland sharks and seabirds living in the area were already known to be eating the debris, but the appearance of 31 pieces of floating debris in an otherwise largely pristine environment painted a disturbing picture of pollution problems that will only get worse if the amounts of litter entering the oceans aren’t reduced.

In the U.S., one of the top waste-generating countries, littering is a major issue, especially in the form of single-use plastics, like soda bottles, drinking straws and potato chip bags.

With plastics now entering the farthest reaches of the globe, what does that mean for the environments where these pollutants are known to accumulate? Mismanaged waste is particularly problematic in China, Indonesia, Vietnam, Thailand and the Philippines, which together make up the top five countries for  plastic pollution. In the U.S., one of the top waste-generating countries, littering is a major issue, especially in the form of single-use plastics, like soda bottles, drinking straws and potato chip bags.

According to environmental advocacy group Ocean Conservancy, some plastic products persist for so long, even in salty ocean water, that they’ll still be recognizable after 400 years. However, an equally alarming problem is the plastics that do get broken down into tiny pieces. Microplastic particles, which are less than 5 millimeters long, are literally clouding the oceans in spots.

Carried along with the ocean’s currents, swirling gyres of “plastic smog” now cover about 40 percent of the world’s ocean surfaces. They’re being eaten by fish and other marine life — that is well-known. But only recently did researchers take the logical next step to determine that it’s not only marine life ingesting plastic — you probably are too.

Research commissioned by media outlet Orb revealed alarming data about plastic pollution in tap water, with 83 percent of samples tested worldwide coming back as contaminated. In the U.S., 94 percent of tap water samples were found to contain plastic — the most out of all the locations tested.

“Fibers in tap water … are both a discovery and a marker — a visceral sign of how far plastic has penetrated human life and human anatomy. We can’t see the long-chain molecules of pollutants like polyfluoroalkyl chemicals, even if they do reside in more than 98 percent of the population. But when fibers are filtered in a laboratory and enlarged by a microscope, the contamination becomes real.

The first studies into the health effects of microscopic plastics on humans are only just now beginning; there’s no telling if or when governments might establish a ‘safe’ threshold for plastic in water and food. Even farther away are studies of human exposure to nanoscale plastic particles, plastic measured in the millionths of a millimeter.”

Orb found, for example, 16 fibers in tap water taken at the visitor’s center in the U.S. Capitol in Washington, D.C., along with fibers in samples taken from Trump Tower in New York. Plastic fibers were also found in water taken from Indonesia, India, Ecuador, Uganda, England and Lebanon.

Where Are the Primary Sources of Microplastic?

Orb noted six primary sources of “invisible plastics,” one of which is synthetic microfibers from synthetic clothing like fleece, acrylic and polyester. Microfibers from clothing are released during washing, to the tune of 1 million tons a year. It’s unknown what the environmental effects of microfiber pollution may be, but their irregular shape may make them harder for marine life to excrete than other microplastics (like microbeads).

According to the Mermaids (Mitigation of Microplastics Impact Caused by Textile Washing Processes) project, whose goal is to cut microfiber shedding during washing by 70 percent, the apparel industry has been slow to respond in taking steps to stop microfiber pollution.

A Mermaids report suggested special coatings may help to stop the loss of microfibers during washing, as well as recommended laundry detergents be reformulated to minimize fiber shedding. However, as it stands Orb estimated that more than half of the microfibers released during the wash are missed by water treatment plants and end up in the environment.

Microbeads — those tiny plastic pellets you may have seen in your face wash or hand soap — are another primary source. Microbeads are so small they get flushed right down the bathroom drain and travel through wastewater treatment plants easily, because the filters used are too small to catch them. Research has only begun to reveal the extent of environmental pollution that microbeads have caused.

Related: Why I introduced a ban on plastic straws for NYC by Rafael Espinal.

In a 2012 survey of the Great Lakes, it was found that the area has “some of the highest concentrations of microplastics found in the environment, and microbeads were prevalent.” One-third of the fish caught in the English Channel also contain microbeads, as do 83 percent of scampi sold in the U.K. Bans on microbeads have taken place in the U.S. and Canada, but not yet in the EU. Orb estimated that more than 8 trillion microbeads ended up in U.S. waterways in 2015. Other sources noted in Orb’s report include:

The two bullets are not added in the Orb report but should be noted:

Toxic Microplastics May Be Transferred to Farmland

Much of the research on microplastic pollution focuses on marine environments, but the toxic bits are also likely accumulating on land. According to research published in Science of the Total Environment, “Annual plastic release to land is estimated at four to 23 times that released to oceans.” The use of sewage sludge, or biosolids, as fertilizer may be particularly problematic. It’s basically made up of whatever’s left over after sewage is treated and processed.

Writing in Environmental Science & Technology, researchers reported that in Europe and North America, about 50 percent of sewage sludge is used for agricultural purposes. Using data from farm areas, population and sewage sludge usage, along with microplastic emission estimates, they found that between 125 and 850 tons of microplastics per million inhabitants may be added to European agricultural soils each year.

When factoring in the range of sludge application rates, and assuming data from certain other countries with similar plastics usage are comparable, the study found a “total yearly input of 63,000 to 430,000 and 44,000 to 300,000 tons of microplastics to European and North American farmlands, respectively …

This would be an alarmingly high input,” the researchers noted. “Comprehensively, this exceeds the total accumulated burden of 93,000 to 236,000 tons MPs [microplastics] currently estimated to be present in surface water in the global oceans.” In a related publication, the researchers called for an urgent investigation to “safeguard food production,” considering the finding that large quantities of microplastics are likely being transferred to agricultural land via sewage sludge.

It’s long been known that fish are eating plastic debris, but a disturbing study revealed this isn’t occurring by happenstance. Instead, fish may be actively seeking out plastic particles in the ocean to eat, mistaking them for food because of their odor. When microplastics exist in the ocean, they form a biological covering made of algae and other materials that smell like the food the fish would normally eat.

The study is the first to reveal not only that anchovy use odors to forage, but also that the odor of microplastic in the ocean induces foraging behaviors in schools of the fish. The Center for Biological Diversity noted that fish in the North Pacific are known to ingest 12,000 to 24,000 tons of plastic every year and, in a study of fish markets in California and Indonesia, one-quarter of the fish were found to have plastics in their guts.

Plastics and other man-made debris was also found in 33 percent of shellfish sampled. The Orb report even reported that plastic particles less than 50 nanometers long have been shown to collect in plankton, potentially blocking their gastrointestinal tract, as well as accumulating in the many creatures that depend on plankton as a food source. It’s yet another route of plastics exposures to humans, because if the fish are eating plastic, so, too, are the creatures that end up eating the fish.

What effects this will ultimately have on human health remains unknown, but chemical contamination is a real concern. Once in the water, microplastics easily absorb endocrine-disrupting and cancer-causing chemicals like PCBs. Plastics may concentrate such toxins at levels 100,000 to 1 million times higher than the levels found in seawater. It’s even possible that plastic particles may end up in places in your body other than your gut. Orb reported:

“If plastic fibers are in your water, experts say they’re surely in your food as well — baby formula, pasta, soups, and sauces, whether from the kitchen or the grocery. Plastic fibers may leaven your pizza crust, and a forthcoming study says it’s likely in the craft beer you’ll drink to chase the pepperoni down. It gets worse.

Plastic is all but indestructible, meaning plastic waste doesn’t biodegrade; rather, it only breaks down into smaller pieces of itself, even down to particles in nanometer scale — one-one thousandth of one-one thousandth of a millimeter. Studies show particles of that size can migrate through the intestinal wall and travel to the lymph nodes and other bodily organs.”

On a global scale, a variety of endeavors are underway to try to curb plastic waste and pollution. From turning plastic waste into liquid fuel to creating synthetic fibers that don’t shed (or even fashioning clothing out of spider silk), enterprising entrepreneurs are seeking ways to keep plastics out of the environment. Some manufacturers are also looking to create packaging materials that, unlike most packaging currently on the market, can easily be recycled.

You can also take a stand on an individual level and make a conscious choice to use less plastic. Considering the extensiveness of its use and the way it persists in the environment, plastic has the potential to be the worst environmental disaster of all time. To become part of the solution instead of part of the problem, Orb recommends taking the following steps: 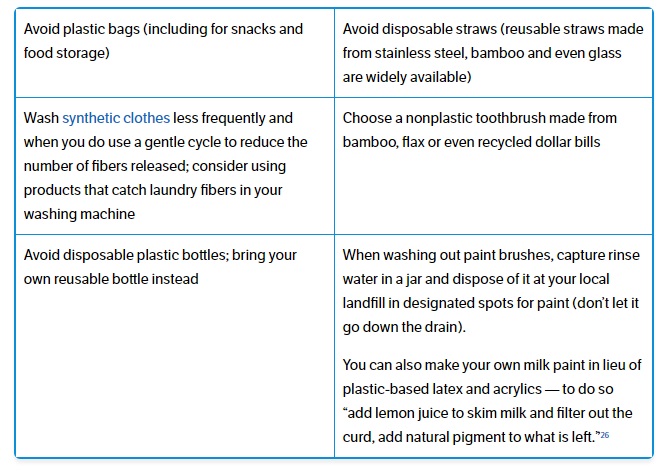 Let’s face it: We’re surrounded by threats, some of them unseen, that are putting us at risk of ill health. GMOs. Processed foods. EMFs. And that’s just the tip of the iceberg. It’s at this time that most people seek guidance to help guard against these perils and secure their well-being. Oftentimes, it seems like an impossible feat.

But here’s a secret: The most complex of tasks can become easier and simpler if you take them one step at a time. The first step can be taking a stand on an individual level and make a conscious choice to use less plastic.

Dr. Mercola, was born and raised in Chicago, IL. Mercola.com, is determined to change the modern health paradigm. He is a Board Certified American College Osteopathic General Practitioners and a State of Illinois Licensed Physician and Surgeon. He is on the Advisory Board of the American Nutrition Association, Price-Pottinger Nutrition Foundation, and the Weston A. Price Foundation.