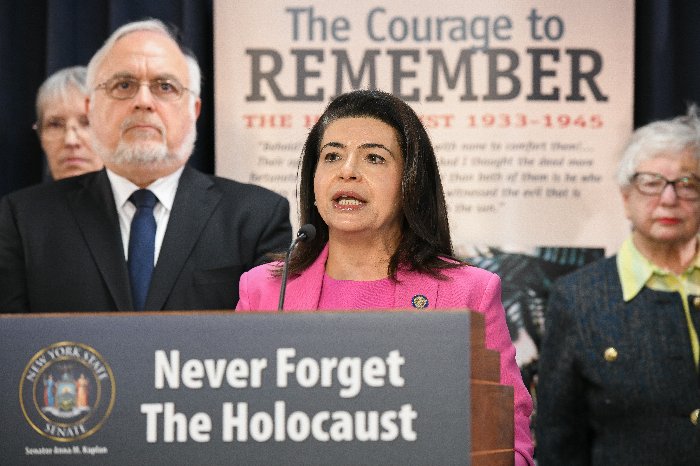 The bill by NYS Senator Anna M. Kaplan (D-North Hills) and Assemblywoman Nily Rozic (D-Fresh Meadows) would ensure that students across New York are receiving a meaningful education on the Holocaust as required by existing State law.

Following passage in the Education Committee, the bill will now go to the Finance committee for consideration.

Senator Anna M. Kaplan said “learning the lessons of the Holocaust has taken on new urgency in recent weeks as we’ve all watched in horror as a peaceful European nation was invaded under false pretenses cynically using Holocaust misinformation as an excuse to do so. This week, as we observe Holocaust Remembrance Day, we’re doing our part in the New York State Senate to ensure that “never forget” isn’t just a saying, but something we fight to ensure, by advancing the Holocaust Education Bill through the legislative process. I want to thank Senate Education Committee Chair Senator Shelley Mayer for moving this vitally important bill, and I want to thank my colleagues on the committee for their unanimous support.”

Senate Education Committee Chair Shelley B. Mayer said: “I am very pleased that this bill passed through the Education Committee with a unanimous, bipartisan vote. We know that knowledge of the Holocaust is woefully inadequate among adults, and our schools must be the leaders in ensuring the next generation is fully educated about the horrors of the Holocaust. I am hopeful that we will achieve that goal this session with passage of this bill.”

A recent study by the nonprofit Conference on Jewish Material Claims Against Germany (Claims Conference) revealed disturbing findings of Holocaust knowledge among New Yorkers ages 18-39, including that 58% cannot name a single concentration camp, 19% believe that Jews caused the Holocaust, and 28% believe the Holocaust is a myth or has been exaggerated. In each of these three metrics, New York had the worst score of any state in the US.

Legislation introduced in the New York State Senate and Assembly by Senator Kaplan and Assemblywoman Rozic, S.121A/A.472A, would ensure that New York students are learning about the Holocaust at school, something that 90% of the general population considers ‘important’ or ‘somewhat important’ according to a recent study by the American Jewish Committee (AJC).