History Of A Song, “Underneath The Harlem Moon,” By Harlem’s Mack Gordon (Videos) 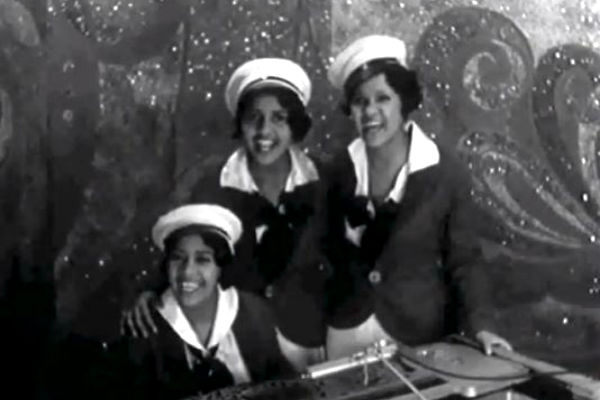 This post has very little to do with authenticity, I’m afraid. It’s more about race, irony, and the way a song’s meaning changes over time. In that sense, it resembles the exploration of Mississippi John Hurt’s “Nobody’s Dirty Business” and “Frankie” to which we devoted the second chapter of our book. It’s an attempt to take a particular song and look at how its meanings have changed over time.

The song is “Underneath the Harlem Moon,” Harlem’s Mack Gordon’s first hit, in 1932. Gordon was a Polish Jew, originally named Morris Gitler, who had come to the United States in 1908 at the age of four. Now he was 28, and has appeared in vaudeville, he decided to open a minstrel number. His lyrics were pure racist malarkey:

There’s no fields of cotton, pickin’ cotton is taboo;
They don’t live in cabins like old folks used to do:
Their cabin is a penthouse up on Lenox Avenue,
Underneath the Harlem moon.

They just live on dancing,
They’re never blue or forlorn.
‘Tain’t no sin to laugh and grin,
That’s why darkies were born.

They shout “Hallelujah!” ev’ry time they’re feeling low,
Ev’ry sheik is dressed up like a “jo ja” [Georgia] gigolo;
You may call it madness but they call it “hi de ho,”
Underneath the Harlem moon.

Joe Rines, a white Boston bandleader, popularized the song, and it became a huge hit, with at least eight different versions from different bands.

Thirty-eight years later, Randy Newman recorded a lovely version of the song on his second album, 12 Songs. It closed side one, preceding, on the other side, “Yellow Man,” which is equally racist malarkey, and a satirical version of “My Old Kentucky Home,” a Stephen Foster minstrel number. Newman’s point was unmistakable: he was singing racist and demeaning songs in order to perturb his listeners. It worked. Everyone who listened to “Underneath the Harlem Moon” got uncomfortable. As Greil Marcus wrote in Mystery Train, “Here [Newman] was, a struggling singer whose only possible audience would be urbane, liberal rock ’n’ roll fans, and he was unveiling . . . the charms of racism.” (Newman would go on to write many even richer evocations of American racism, among them “Sail Away,” “Rednecks,” and “Short People.”)

OK, so here’s a terribly racist song from the early 1930s, written and performed by whites, and demeaning blacks. There’s nothing so terribly new and shocking about that, is there? I could name dozens of other examples.

But what should we make of the fact that half of the people who performed “Underneath the Harlem Moon” in the 1930s were black?

The Washboard Rhythm Kings did it. So did Fletcher Henderson and His Orchestra, with Katherine Handy (W. C. Handy’s daughter) on vocals. Ethel Waters performed it in the movies. The Brown Sisters did too. Even Billie Holiday wrote, in Lady Sings the Blues (page 65), that she used it to audition for a spot in a Philadelphia theater. It appears that black people liked this song.

The mind reels. How is this possible? Their performances of the song sound full of unfeigned enthusiasm and joy. Did they completely overlook the racism of its lyrics?

Let’s consider a few examples. First, Katherine Handy’s version. It’s pretty straight, lyrically–she only makes a couple of minor changes, including “laugh and grin” to “guzzle down gin.” And she swings the melody pretty nicely.

Let’s take the Brown Sisters’ version next. This trio never released any records, and they were clearly heavily influenced by the Boswell Sisters. This is, in fact, their only recorded performance, from the mid-1930s film Harlem Review. It’s a terrific version, but at the end they add: “Ain’t no sin to take off your skin and dance around in your bones!” Are they completely negating the racial aspect of the song by removing their skin? You tell me.

Lastly, let’s listen to Ethel Waters’s version, from a fairly appalling 21-minute film called Rufus Jones for President (you can download the whole film) starring Sammy Davis, Jr. as a seven-year-old whose mother, played by Waters, dreams he gets elected president. First off, Waters changes the third person plural to the first person plural throughout. Then she changes “darkies” to “we schwartzes.” “You may call it madness” becomes “white folks call it madness.” And then she really goes to town, supplying brand new–and brilliant–lyrics for the last half of the song. It’s an incredible act of reclamation, changing racism to triumph. And it dates from 1933, only a year after the song’s debut.

We don’t pick no cotton, pickin’ cotton is taboo.
All we pick is numbers, and that includes you white folks too,
’Cause if we hit, we pay our rent on any avenue
Underneath our Harlem moon.

We just thrive on dancin’;
Why be blue and forlorn?
We just laugh, grin, let the landlord in–
That’s why house rent parties were born!

We also drink our gin, puff our reefers, when we’re feelin’ low,
Then we’re ready to step out and take care of any so-and-so.
Don’t stop for law or no traffic when we’re rarin’ to go,
Underneath our Harlem moon.

Are we getting closer to answering our original question–how could black people like this song? The answer, I think, has four parts.

First, they didn’t necessarily like the song–perhaps they were singing it because it was so popular with the white audience. That might explain the Fletcher Henderson, Washboard Rhythm Kings, and Ethel Waters versions–all of them played for whites.

It might explain Billie Holiday’s audition–she says she chose the song because it was “real popular.” But it doesn’t explain the Brown Sisters’ choice of that song–Harlem Review was strictly a race movie, made by blacks and shown to blacks.

Second, the song was a celebration of Harlem, however couched in racist metaphors and analogies; and blacks had good reason to celebrate Harlem, the locus of the Harlem Renaissance, in those days. This was something black entertainers could relate to.

Third, blacks were so inured to minstrel imagery by this point that it may have been like water rolling off their backs. Remember that many of the most popular minstrel troupes of the 1920s were black, not just blackface. Nowadays the song’s blatant racist imagery strikes everyone who comes across it as unspeakably awful. Ben Ratliff is horrified by it when he writes about Henderson’s version in his excellent guide to the 100 most important jazz records; Rolling Stone, reviewing 12 Songs, wrote of it that “every line contains some of the most blatant racial typing ever set down in song.” But back in 1932 it was simply par for the course.

Lastly, and most importantly, these artists weren’t just performing straight versions of the song, like the white folks were. They were jazzing it up, and in doing so, they were signifying. Ethel Waters did it best, but even Katherine Handy was doing it a little bit.

And that points out another, broader difference between how whites and blacks have approached racism in music. White folks use a distant kind of irony, and there’s no better example than Newman. They make white racism seductive, thereby problematizing it. Blacks, on the other hand, tend to keep things close to home, and there’s no better example than Ethel Waters. Their versions of white racism are often fierce and defiant.

I want to look briefly at a couple of more contemporary examples: CocoRosie’s “Jesus Loves Me” and damali ayo’s “White Noise” (ayo wrote the piece, based on the questions white folks asked her; it’s performed by Madeleine Sandford). Both are straightforward presentations of white racism.

Just like Newman, CocoRosie makes racism pretty–there’s no essential difference between this song and Newman’s version of “Underneath the Harlem Moon.” These songs make my skin crawl, but they’re meant to.

But I have to confess I find Ethel Waters’s version of “Harlem Moon” more effective than Randy Newman’s, and ayo’s piece more effective than CocoRosie’s. Both Waters and ayo reclaim racist words as their own, making them strangely triumphant in the process.