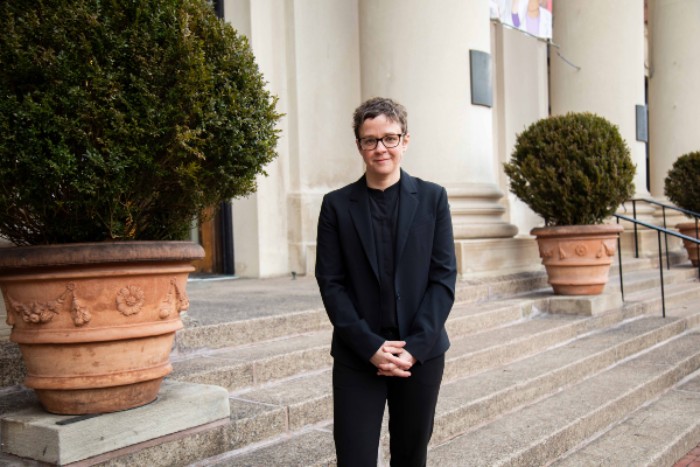 Barnard College is thrilled to welcome Emma Wolfe ’01 as the first Senior Advisor to the President for External Relations and Leadership Development. She will report directly to President Sian Leah Beilock and officially joins Barnard today.

This newly created position at the College will serve two goals: Wolfe will cultivate and enhance Barnard’s strategic relationships with federal, state, and local government officials and for the College’s interests on issues critical to higher education.

She will also streamline, formalize and expand existing leadership development opportunities at Barnard College to ensure that all students, faculty, and staff can cultivate the skills needed to become effective leaders.

“It’s fantastic to be able to hire such an incredibly accomplished Barnard College graduate for this new role,” President Beilock said. “Emma will leverage her real-world experience and relationships to help us fulfill our mission and identity as a college not just in the City of New York, but of the City of New York — a dynamic part of our community and a key element of the city’s higher-learning ecosystem. She’ll also work within our campus community to enhance leadership growth across the College.”

Wolfe, who majored in urban studies and sociology at Barnard, is deeply passionate about community organizing and politics.

For the past 12 years, she helped craft and implement Bill de Blasio’s agenda, first during his tenure as Public Advocate and then for the entirety of his two terms as Mayor, serving as his highest-ranking staffer: she was Chief of Staff when he was Public Advocate (2010-2012) and functioned as Political Director for New Yorkers for de Blasio (2012-2013).

“I’m really excited to take on this new challenge and do all I can to build an even better Barnard in 2022 and beyond,” Wolfe said.

Wolfe’s efforts enhanced the lives of New Yorkers in meaningful ways, including her role helping make universal pre-K available to all children in the five boroughs, which was a centerpiece of de Blasio’s mayoral campaign.

The program, known as Pre-K for All, guarantees every 4-year-old in New York City a seat in a free, full-day, high-quality preschool. Today, nearly 68,000 4-year-olds are enrolled.

Prior to her work in city government, she served as Organizing Director (2005-2007) and then Election Campaigns Director (2007-2009) for the Working Families Party, a political party founded in New York in 1998 to fight for “workers over bosses and people over the powerful.”

Wolfe also worked for the Service Employees International Union (SEIU), the largest labor union in North America — with more than 2 million members — and was the NYC Lead Organizer for the Association of Community Organizations for Reform Now (ACORN).

Wolfe also worked for the Service Employees International Union (SEIU), the largest labor union in North America — with more than 2 million members — and was the NYC Lead Organizer for the Association of Community Organizations for Reform Now (ACORN).

She credits her mother’s fervent beliefs about fairness as well as her time as a Barnard student with inspiring her interest in activism, community organizing, politics and public service.

“There’s a spirit of collaboration at Barnard that feels familiar and takes me back to my college years,” Wolfe said. “This really feels like a homecoming — and, more importantly, an opportunity to help make the College’s voice heard on vital educational and research interests.”

Working in the Office of the President, Wolfe will liaise with elected and appointed government officials and community leaders, advising Beilock and coordinating with the Executive Vice President of the College, General Counsel, Chief of Staff and members of Barnard’s senior staff on all government activities at the College. Additionally, she will:

To ensure that all students, faculty and staff are positioned to take advantage of leadership development opportunities, Wolfe will provide professional direction and oversight to the:

This will entail working with Cammie Jones, Executive Director of Community Engagement and Inclusion; Andrea Stagg, Director of Government Relations; and Umbreen Bhatti, Director of the Athena Center for Leadership to build on all of their remarkable achievements to date.

In order to create programming and identify and engage those who can positively impact leadership development at Barnard, she will also collaborate closely with the College’s senior staff, Beyond Barnard and Human Resources.

And she will be available to faculty involved in Barnard Engages: New York, Africana Studies’ Harlem Semester and more.

With hard work and cooperation from colleagues, Wolfe will ensure that there are increased opportunities for our faculty, staff and students to participate in the social, political, intellectual and cultural life of our city.

“Wolfe has a deep understanding of the leadership skills needed to achieve success in this city and has long understood its place in the national and international landscape, working to improve it for more than two decades,” said Jomysha Delgado Stephen ’96, Executive Vice President of the College, General Counsel & Chief of Staff to the President. “She also knows how the City functions and will use that wealth of knowledge in this role to help President Beilock strengthen Barnard’s connections within New York City and broaden the school’s already impressive offering of leadership development opportunities.”