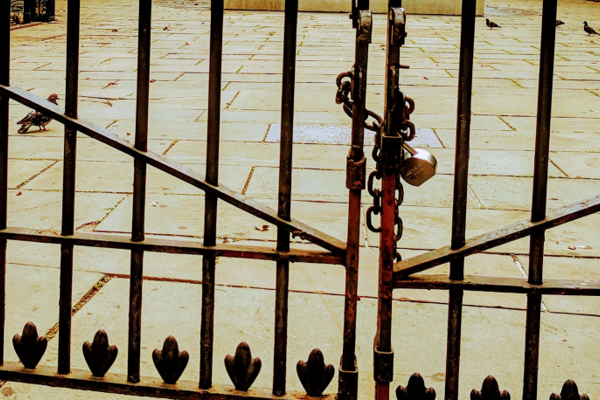 A padlocked public park at City Hall permits pigeons to petition the Mayor who cast himself as underdogs’ defender.

Tourists and commuters twist in twelve-foot sidewalk width two-inch among the righteous hundred who harangue him.

I parse rusting picket fence and trees to see the chief executive familiar long and lean, lean back relaxed beside a tiny table.

Beneath his office steps where the multi-hued umbrella that shields him from the sun is a symbol for the masses rotting in a complex turned to hell.

Await your day in court with injury or illness minus medicine or care.

Maybe our Mayor is indeed on top of things dispatching orders on the cellphone at his ear or is he playing Tetris until an aide draws near.

If I could I’d charge him with his duty for those in detention yet innocent of crime handle fear to coexist within the grime that corrections officers.’

Keep your homemade weapon ready always stay alert for you’ll lie down when you tire in a tiled floor shower stall clutch a blade for safety.

Since your feet may chance to strike the next man’s head your bodies then collide when as fate has brought you to the limit of your patience.

You’re both ready to EXPLODE.

May the precision of a sniper help you aim your pee with care.

When you can no longer hold it and just let it fly.

God forbid an errant splash along a muscled thigh of a fellow inmate jammed against you also seething at his plight.

The callous Mayor when a twelfth death had occurred consorted with the royals Meghan Markle and Prince Harry.

At the One World Observatory where they did the tourist, the thing it must have been a lovely perch for such a pleasant view.

Heedless of the precedent of Attica’s rebellion plus the common knowledge that HISTORY REPEATS.

Send your poem to harlemworldinfo@yahoo.com with poetry in the subject line.