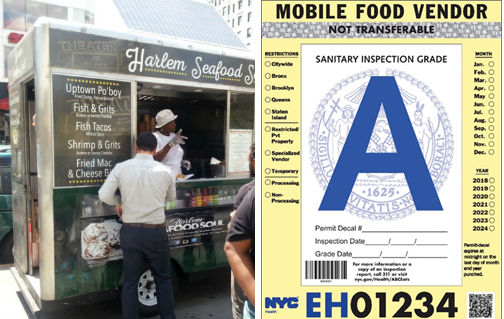 The Health Department today announced that the first letter grades have been issued to food carts and trucks. On the Lower East Side, Health Commissioner Dr. Oxiris Barbot congratulated Mahmoud Abdel Wahed, the owner of Mo’s Coffee Cart, which was among the first food carts in the city to receive an “A” grade. This past November, the Health Department published the final rules for the new grading program, which introduced a scoring system similar to the one used for restaurant inspections. The new grading program holds carts and trucks to the same food safety standards as restaurants. Food carts and trucks now receive points for violations, which correspond to either an “A,” “B,” or “C” letter grade. The new letter grading program applies to all food carts and trucks authorized to operate in New York City and is required under last year’s Local Law 108 sponsored by Council Member Karen Koslowitz. The letter grade is featured on the permit decal located on the cart or truck. It will take two years for the city’s more than 5,000 carts and trucks to receive grades, similar to the rollout of restaurant grading.

“New Yorkers told us that they love our restaurant grading program, and it only made sense, thanks to Council Member Koslowitz, to extend it to food carts and trucks,” said Health Commissioner Dr. Oxiris Barbot. “Now customers will be able to see, before deciding to eat at a food cart, how it performed at its health inspection.”

“Food trucks and food carts are enormously popular, and there’s no reason they shouldn’t get a letter grade just like a restaurant. No matter where you are eating in this city, you should have information about food choices,” said Speaker Corey Johnson. “I want to thank Councilmember Karen Koslowitz for championing this issue and my colleagues at the City Council for passing this law, as well as Health Commissioner Dr. Oxiris Barbot and the Department of Health and Mental Hygiene for their continued commitment to keeping New Yorkers healthy.”

“I cannot imagine someone not looking for a restaurant’s letter grade from our city’s Health Department before deciding whether or not to patronize a restaurant. The “A,” “B,” “C or “Grade Pending” carries with it real significance,” said Council Member Karen Koslowitz. “Every day, countless numbers of people in New York have been expected to purchase food from a street vendor without knowing to a general degree the cart’s compliance with the NYC Health Code. Starting today that will change.”

“New Yorkers have a right to know that food carts meet uniform health standards, and it’s good news that the Health Department is implementing a letter grading system for food carts and trucks to help assure that those standards are met,” said Assembly Member Richard N. Gottfried, Chair of the Assembly Committee on Health.

To help vendors understand the new grading system, the Health Department is distributing a self-inspection worksheet to help vendors monitor their own food safety practices. The Department is also hosting a series of free workshops about the new grading program for vendors. To date, over 300 vendors attended the workshops, which were presented in English, Spanish, Bengali, Arabic, and American Sign Language. Upcoming workshop dates and locations are posted on the Health Department’s website at nyc.gov/health/mobile food.

The expansion of letter grading allows the Health Department to make penalty schedules for scored and unscored violations and fine reductions for food carts and trucks consistent with restaurants. The policy will result in a reduction in fines for food cart or truck owners. Now if a food cart or truck earns an “A” grade at the time of inspection, fines imposed for food safety violations will be eliminated.