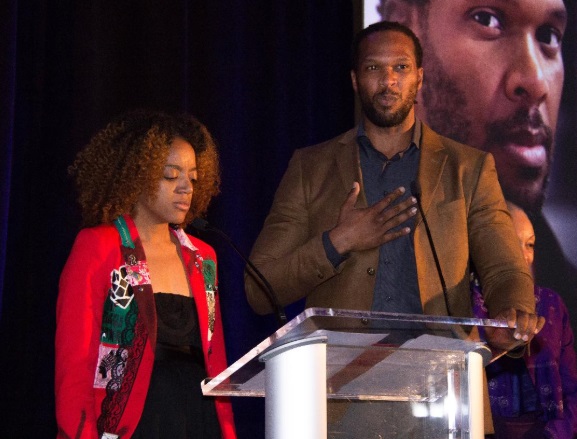 Harlem resident LaNora Williams-Clark, Esq., has been selected as one of the winning Fellows at this year’s PitchBLACK, an interactive pitching session held on Friday in New York City. The 3,000 Project, a documentary on which Williams-Clark, was selected as one of the winning broadcast projects at PitchBLACK. The event culminated Black Public Media’s 13-week 360 Incubator+ for broadcast programs, web series, and virtual reality projects. The national incubator and talent development program, designed to identify and pipeline quality black content while honing the skills of brilliant makers, awarded a total of $320,000 in funding.

Directed by Keith McQuirter, The 3,000 Project explores how Wisconsin — one of the most incarcerated states in the nation — is grappling with parole reform. Williams-Clark and McQuirter were both on hand to receive the honor.

Williams-Clark has spent nearly two decades advocating for prison and sentencing reform. Her journey began at UC Berkeley where she did research on mandatory minimum sentencing and the “War on Drugs.” She went on to assist in creating the nation’s first offender reentry clinic at the New York University School of Law. Williams-Clark eventually left the practice of law to launch Muse Creative Arts Agency, LLC, which supports the efforts of writers and creators using film and theatre to tell underrepresented stories about the Black experience.

The 3,000 Project will be awarded $100,000 in funding and a license agreement for public media distribution. Winners were announced Friday at the inaugural PitchBLACK Awards at Apella by Alexandria on Manhattan’s East River by BPM’s Denise Greene, administrator of the 360 Incubator+, and Sandra Rattley, the program’s creative consultant. McQuirter and Williams-Clark’s mentor through the program is Chris Hastings, WORLD Channel executive producer, editorial manager of content and executive-in-charge of production.

“The 3,000 Project is a very deserving one. We will continue to support it as we facilitate the connections with the distributors and funders at the pitch forum and field additional interest developed,” said BPM’s Executive Director Leslie Fields-Cruz. Based in Harlem, BPM is the nation’s only nonprofit dedicated solely to media content about the black experience.

The 360 Incubator+ is funded by the Corporation for Public Broadcasting, the MacArthur Foundation, the NEA, the New York State Council on the Arts and New York City Department of Cultural Affairs.

Black Public Media (BPM), formerly the National Black Programming Consortium (NBPC), is committed to enriching our democracy by educating, enlightening, empowering and engaging the American public. The nonprofit supports diverse voices by developing, producing and distributing innovative media about the black experience and by investing in visionary content makers. BPM provides quality content for public media outlets, including, among others, PBS and PBS.org and BlackPublicMedia.org, as well as other platforms, while training and mentoring the next generation of black filmmakers. Founded in 1979, BPM produces the AfroPoP: The Ultimate Cultural Exchange documentary series and manages 360 Incubator+, a funding and training initiative designed to accelerate the production of important black serial and interactive content.